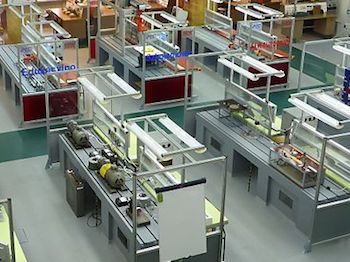 The Research Council of Norway has granted NOK 15 million to Brazilian-Norwegian research projects through the PETROMAKS 2 program.

These are projects that will solve some of the most important challenges in the industry, program chairman Per Gerhard Grine states, and the selection of the projects was made on December 18, 2014.

A total of NOK 250 million has been granted to different research projects, and NOK 15 million was earmarked to projects by research institutions and companies teaming up with Brazilian partners. The grant will strengthen the cooperation with Brazil within research and innovation even further.

“Two projects established with Brazilian partners were granted funding, and the projects selected are projects Uni Research and DNV GL. Uni Research prevailed with what we call a Competence project for the Industry (KPN) and DNV GL for an Innovation Project for the industry (IPN)”, Andreas Q. Nielsen, senior adviser of the Department of Petroleum in the Research Council of Norway, informs in an email to NBCC.

4D Seismic and materials
DNV GL was granted funding to a project on the the development of affordable composites in the oil and gas industry, a project where DNV GL researchers cooperate closely with Petrobras. The use of composite materials will contribute to reducing costs in a number of areas and in addition, lower the weight of the materials used.

The Bergen-based research company Uni Research has been granted funding of a project on 4D seismic history matching, in close cooperation with Petrobras.

Two other ongoing projects have also been granted continued funding in 2015.

“Contracts between the Research Council of Norway and the institutions will now be established and signed”, Mr. Nielsen informs. On the council´s website you will soon find more information on the projects.

Brazil is one of eight countries that the Research Council of Norway are giving an extra priority  for its strategic work.

“The efforts of stimulating cooperation between Norwegian and Brazilian players in the PETROMAKS 2 call is in line with to the intent of the BN21 agreement and reflects a common interest from the research communities in both countries. We have seen a fertile environment for further cooperation between Norwegian and Brazilian players, and this will have positive effects on the future exchange and development of expertise and technology”, Andreas Q. Nielsen informs.

“Our mission at the Research Council of Norway covers all disciplines for research and applied research and innovation, and international collaboration is important in this respect. This agreement opens for common calls and proposals and other common activities. I am therefore very pleased to sign the agreement on behalf of the Research Council of Norway, and look forward to start working on action plans and the first common call, which will be in the area of petroleum”, director Siri Helle Friedemann said during the signing.

The topics for the first common call will be within the frame of the BN21 agreement, and with funding from both the Research Council of Norway and Finep, the two institutions expect even additional funding being made available from the industry.

During her visit to Brazil, Siri Helle Friedemann outlined the different funding instruments of the Research Council of Norway.

The DEMO 2000 program is a financing instrument for the demonstration and piloting of technology, and has a NOK 3,5 billion project portfolio. Several projects with Brazilian support have received funding through the DEMO 2000 program.

LISI is a new instrument being launched in 2015 for Long-term Institutional Partner Cooperation, where the goal is to enhance long term relations between Norwegian and foreign institutions within higher education and research.

The PETROMAKS 2  program is a financing instrument for basic and applied research and innovation, and always open to international cooperation.

During her presentation to the November Conference, Siri Helle Friedemann said that the Research Council of Norway received 12 applications, asking for 10 times more than the available funding of NOK 15 million in the PETROMAKS 2 call.

“The Research Council of Norway appreciates the great interest”, Mrs Helle Friedemann said at the time.

New funding are available through the PETROMAKS 2 and PETROSAM 2 programs, and NOK 10 million will be granted to relevant projects over a period of 3 years. For more information, click here  (In Norwegian).