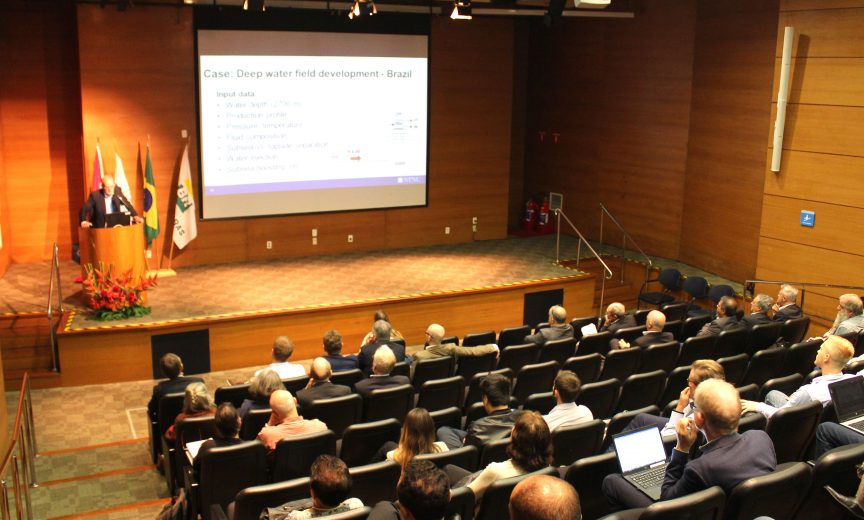 The November Conference has been held in Rio de Janeiro every year since 2013. The original focus of the conference was on oil and gas research, but in 2019, the scope was expanded to cover energy research more broadly, with a special focus on the links between fossil energy and renewable energy.

The conference brings together researchers and industrial practitioners from Norway and Brazil to discuss and develop collaboration within energy research and development. Connections made at earlier conferences have led to fruitful cooperation on many levels. This year, Conference Day 1 featured presentations on Brazil´s energy future and Norway’s role in it. Digitalization was also on the agenda. Parallel sessions on paths towards carbon neutrality, on flow assurance and on digitalization and automation were also part of the program the first day.

On Day 2, energy transitions and environmental challenges were addressed, in particular how to put oil and gas experiences and competences to new use. Parallel sessions were held on solar energy, subsea development, on transformation in the oil & gas supply chain, and on environmental monitoring. 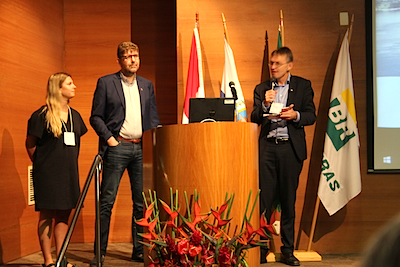 Clusters and collaboration
Presentations on research collaboration opened day 3 of this year´s November Conference. The University of South-Eastern Norway is part of a student exchange program called «Intern Abroad», and professor Eivind Fauskanger presented the program to the conference. Five different Norwegian universities and university colleges have already sent students to Brazil where they attend courses at institutions like PUC, IME, UERJ and UFRJ, as well as work as interns in companies like Kongsberg Maritime, The Norwegian Seafood Council, Petrobras, TechnipFMC and Swedish company Roxtec.

«We thought it was a good idea to send students to Brazil, and also hope to receive Brazilian students in Norway soon. The students work 240 hours for the company with an assigned advisor at the university who guide them and they also take university courses. The companies commit to providing the student with relevant tasks», Mr. Fauskanger said.

Helena Tveraabak is one of the students that has been in Brazil as an intern in TechnipFMC and an exchange student at PUC in 2018-2019. Today she is working at TechnipFMC in Brazil. She has a bachelor degree in subsea engineering from Norway and wrote her Master Thesis during the internship.

«I was an intern in the company for six months and it was a very valuable experience that opened doors and gave me access to people in the industry both in Brazil and Norway. I gained experience related to the topic I did research on and I gained cultural exposure and improved my language skills.»

Her Master Thesis focuses on regulations and practices in Brazil related to the structural integrity assessment and the risk management for C/WO riser systems.

«This was based on needs that engineers in Norway had, and the internship program made it possible to do this kind of research. The internship also gave me a foundation to build a career as an engineer in Brazil, and was valuable to the industry in both Norway and Brazil, according to the feedback I got», Helena Tveraabak says.

«We have several funding programs for cooperation with Brazil and over NOK 60 million have been allocated to projects with Brazilian partners since 2015. Today there are about 25 Norwegian students in Brazil per year. We hope a wider use of internships abroad can change this and have a positive impact on Norwegian-Brazilian relations.»

A lot of research has been done on the outcome, impact and benefits of learning abroad. To a host company, internship programs mean access to talent and a new perspective. For the students, research shows that learning abroad promotes deep learning and also has a positive impact on creative thinking skills and language skills.

In a separate presentation, Sigbjørn Sangesland NTNU shared his experiences with a program at Unicamp. Professor Dagoberto Alves de Almeida from the Federal University of Itajubá, Minas Gerais presented the technology and energy cluster in this region. Many tech-based companies are present in this part of Minas and the university´s engineering program has a strong tradition.

Parallel sessions on materials technology and on improved oil recovery closed this year´s conference on November 13.

On November 11, it was Mr. William Christensen from the Norwegian Ministry of Petroleum and Energy who opened the event, together with Consul General Marianne Fosland and Chair of the organizing committee, Mr. David Cameron.