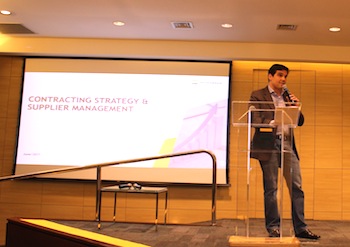 During a Petrobras event on June 23, 2017, Norwegian stakeholders learned about the new procurement structure of Petrobras.

The event was organized by the Petrobras Procurement Department and Norwegian Energy Partners (Norwep), with the support Team Norway in Rio de Janeiro. The main ambition of this event was to give the participants a clear understanding of the new Petrobras procurement structure, and the importance of the registration process for suppliers.

«In difficult times we have to work closer with our partners, and Norwegian companies have been our partners for a long time. More than ever we need your support to get Petrobras back on the road. I am confident that Petrobras will grow, and that we will grow together with our partners and suppliers», Chief Procurement Officer of Petrobras, Eberaldo de Almeida Neto, said in the welcoming remarks to the meeting, organized exclusively for Norwegian companies and institutions.

Team Norway
In the first session of the event, Norwegian stakeholders in Brazil presented themselves to the Petrobras representatives present.

Consul General Sissel Hodne Steen talked about Norwegian investments in Brazil in general and about the close relations between Norwegian stakeholders and Petrobras.

«President Temer´s visit to Norway made it clear that there is a huge interest in Norway and among Norwegian companies to continue investing in Brazil», she said.

Last year, Norway was the 8th biggest investor in Brazil, investments totaling USD 30 billion, where 2/3 of it has been invested after 2009. The petroleum, gas and maritime industries represent 50-60 percent of the investments. According to estimates, Norwegian investments have created 22.000 jobs in Brazil.

«The relation is important to both countries, as Brazil is one of the  most important markets outside of Europe to Norway.»

The Consul General also talked about Petrobras´relations with Norway, and closed her presentation with a curiosity – that the Norwegian Pension Fund Global actually owns Petrobras shares worth 475 million USD, a 0,76 % share.

Stein Gunnar Bondevik, the director of Innovation Norway in Brazil, presented the BN 21 agreement for RD&I cooperation, signed in 2013, an agreement that has resulted in joint calls for cross-border research projects, a cooperation between Finep and the Research Council of Norway, among other things.

«During a downturn, innovation and research is called for,  and innovation is probably one of the most important solutions. We need to find better ways of going about our business, and we are here to support that», Mr. Bondevik said.

NBCC president Rachid Felix presented the chamber of commerce, currently with 124 associates. He focused on the importance of collaboration in the development of the oil and gas industry.

«We believe that an open dialogue will be very productive to strengthen even further the relations between Norway and Brazil, and a new business model for our industry must be built in a modern, open an collaborative way. Focus must be on transparency, technology, innovation and competitiveness. We would like to see a strengthened cooperation in areas where synergies will make a difference», Mr. Felix said.

Abran chairman José Roberto Neves presented Abran, an association of Norwegian shipowners in Brazil, and explained how the association works to promote the interests of the associate companies. Abran is the only international branch of Norwegian Shipowners´Association, founded in 1909, and currently with 150 members.

«Norway is home to the second biggest and most advanced offshore fleet in the world, and a few years ago 1 of 4 OSVs on the Brazilian shelf was Norwegian-owned. Today´s event is an example of our partnership», he said.

New organization chart
In the second part of the meeting, General Manager for Procurement Strategy and Supplier Base Management in Petrobras, Mr. Juliano Dantas, presented the new organization chart of the company, and explained how procurement now is gathered in one department, with four support areas, four contracting areas that take care of all procurement processes of the company. He also presented the main metrics of the business and management plan.

«The purpose of this meeting is to introduce the new communication channels at Petrobras, through category managers and present how Petrobras is changing its approach to procurement and supplier relationship, our routines at the strategy area and how we are facing the current market scenario. We are printing a business oriented culture focused on simplification of processes and decision making as well as looking at Total Cost of Ownership in cooperation with our suppliers», Mr. Dantas said.

He outlined the guidelines that Petrobras has adopted for the procurement process with compliance, standardization, co-engineering and analytics as some key words.

«We are now working to map gaps in the supply chain, and some critical categories are subsea, valves, maintenance, dynamic equipments and others», Mr. Dantas said.

The Petrobras executive also gave contacts to department heads of all department enabling Norwegian suppliers to contact them directly. Reducing entry barriers is also something Petrobras is working on, and there are lots of opportunities, according to Mr. Dantas.

In the last part of the seminar, the process of registration that suppliers of goods and services must go through as well as the criteria for participation on bids  was explained in detail to the participants.

Registration happens through the Petronect web platform, and registered suppliers receive a certificate, called CRCC, valid for one year.

Keeping the registry updated at all times is of great importance, and Petrobras is currently reviewing the supplier registry. The performance of the registered suppliers on many levels, will also be evaluated and rated, according to Petrobras.

«We are very pleased that Petrobras is always opening the doors for the Norwegian companies and we may use this opportunity to consolidate a long term cooperation. We want to assist Petrobras in building its history of success in the challenging Brazilian offshore market and Norwegian companies are foreseeing a new era and a promising future with the partnership with Petrobras, based on the current mindset of opening an arena for exchanging experiences, ideas and aiming for a different way of doing business for a win-win result. Strategy is one of the key words», Country Manager Adhemar Freire of Norwep concludes.