Our gift to Rio de Janeiro 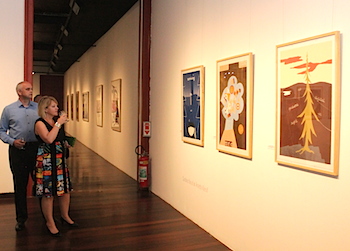 Marcelle Pithon (to the left) and Helle Klem.For the second time in two years, Norwegian artists are exhibiting their work in the Centro Cultural dos Correios in Rio de Janeiro. “This is our gift to Rio de Janeiro for the 450 years anniversary”, Consul General Helle Klem said at the opening.

The exhibition “Re-Conhecimento  – A gravura Norueguesa Contemporânea” is open to the general public from March 5 – May 3, 2015, and presents 100 engravings from 21 contemporary Norwegian artists like Kjell Nupen, Bjarne Melgaard and Håkon Bleken, to the Brazilian audience.

The collection was first shown to art lovers at the Museu Nacional de Brasília, and will continue to Curitiba, São Paulo and Recife the next months.

“We are very proud and honored to show this collection to the public in Rio de Janeiro, and it is a pleasure for me to offer this as our gift to Rio de Janeiro for the 450 anniversary. 21 of the most important contemporary Norwegian artists, using various techniques and styles, are represented here, and art is something that exceeds geographical borders and shows us that we have a lot in common, despite the geographical and cultural distance between Norway and Brazil”, Mrs. Klem said in an address during the formal opening of the exhibition on March 4, 2015.

Snow-covered Norwegian landscapes. This is an observation that Marcelle Pithon, manager of the Centro Cultural dos Correios, also defends, and she expressed great satisfaction over receiving the collection of Norwegian engravings to her gallery. In 2013, several paintings of the Norwegian-Brazilian artist Alfredo Andersen was exhibited in the cultural center.  Andersen left Norway in 1892 and decided to settle in Paraná, where he is commonly referred to as the “father of the Paraná painting tradition”, and even “the father of Brazilian impressionism”.

Cultural coordinator Jens Olesen highlights the great variety and versatility of the 21 participating artists in this year´s exhibition. Many of them are showing their engravings for the first time in Brazil.

According to the gallery homepage, the exhibition “presents the complexity and variety of the extensive universe of Norwegian graphic arts of the past 25 years”.

The participating artists are referred to as icons in the Norwegian art history. New generations of artists are also represented.

Anniversary gift to Rio de Janeiro.The title of the exhibition “Re-Conhecimento” refers to the the creative process of each artist on one hand, but also the individual perception of the spectator and his interpretation of the images.

It was Edvard Munch´s pioneering woodcuts that were the starting point for the history of Norwegian art engravings.

The two curators Dag Alveng and Magdalena Kotkowska, characterizes the creative process in Norway as a very tense relation between man and nature, due to the countries geographical location far to the north. This tension is also easily recoqnized in the paintings and engravings of Edvard Munch himself.

Many Norwegians used the opportunity to visit the exhibition on the opening day, but those who still haven´t seen the unique collection of Norwegian art on Brazilian soil still has plenty of time to visit it.

The Centro Cultural dos Correios is located in Rua Visconde de Itaborai 20, downtown Rio de Janeiro and entrance is free. The cultural center is open from Tuesday to Sunday from 12-19.