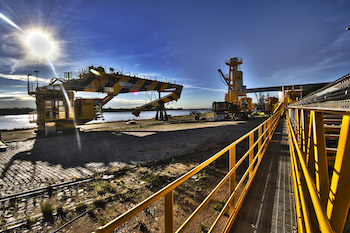 «Efficiency through innovation and new technologies» was the topic of the workshop organized on August 10, 2015, as part of the commemoration of the delivery of the first batch of cranes to the seven drill ships being constructed at the Jurong Shipyard in Espirito Santo.

Crane producer Palfinger Marine is often referred to as a success story in the Norwegian Brazilian business community, as the company in 2013 landed a contract for  the delivery of 28 offshore cranes to the seven drill ships being built at this shipyard. The contract has a total value of 100 million USD. The cranes are being manufactured by Koch Metalúrgica in Cachoerinha, RS, and assembled and tested in Porto Alegre. This happened only two years after the company established in Brazil, at the time as Bergen Group Dreggen, a company that was bought by the Palfinger Group in 2012.

«The first batch of cranes are ready for delivery. They have been manufactured, assembled and tested here in Brazil, with a local content of 60 percent», says Karl Oberreiter, managing director of Palfinger Marine.

«The market will be back»
The Palfinger Group was founded in 1932 and has 10.000 employees and 35 production sites all over the world. The group is a leading international manufacturer of lifting, loading and handling systems, and number 1 in loader cranes, selling 12.000 cranes and 1000 davits per year. Palfinger Marine is one of six business units.

Karl Oberreiter and Suzana S Barros.«The contract with Jurong was the biggest order within the group ever. Due to the local content requirements, we had to build up a plant in Brazil. It took four times as much time and with double cost as in Poland, but the Americas as a region is still a priority to us. We are not done, and some say we are crazy to invest in Brazil right now, but we believe the market will be back. Only the strongest players will survive and we have a strong commitment to Brazil.  We want to be among the top 3 players in the maritime industry», Mr. Oberreiter says.

Suzana Sandoval Barros was Palfinger´s first employee in Brazil, and at the time, the company was known as Bergen Group Dreggen, and started up in the Norwegian incubator office in Rio Sul.

«Due to the Brazilian local content requirements, my first task was to identify a local company to collaborate with. I visited 11 companies, before choosing Koch Metalúrgica. a company that had been providing services for Petrobras for over 30 years. We entered into a joint venture that enabled us to manufacture cranes locally immediately. In 2012, Dreggen was acquired by Palfinger, aggregating new products to our portfolio, and the same year, we won the Jurong contract. Today it makes me very happy to announce that the two first cranes are ready for delivery.

In the JV, Dreggen has the responsibility for design, engineering and the project, while the manufacturing and the steel part is done by Koch. At the new plant in Porto Alegre, two cranes can be tested simultaneously. Mrs. Barros also talked about the challenges she has experienced, and what is needed to succeed in the Brazilian market.

Patience, persistence, knowledge on local laws and regulations and on the market needs and a vast network, are all key factors, according to Mrs. Barros.

«Statoil´s operations in Brazil are only possible because of innovation. The Peregrino field has 2,3 billion barrels of oil in place, but as it is extremely heavy oil, only 300-600 million barrels are recoverable, a rate of about 20 percent. It is the second heaviest oil ever produced in Brazil.  If we are able to apply new technology, we might increase the recovery to 30 percent. Several new technologies have already been implemented, like the long horizontal wells and extended reach wells. We are also studying the use of polymer injection», Mr. Andrade (in the photo to the left) said in his presentation.

Statoil has been present in Brazil since 2001, and is responsible for about 3 percent of  the total Brazilian oil production, making the company one of the main IOCs in Brazil.

Nicolas Poirier focused on the need for innovation in his presentation.

«Innovation is mandatory to survive in this market, and we increase efficiency through innovation. Higher complexity of the projects and the equipment, higher standards, and increasing costs, makes innovation an absolute need. We need to reduce costs, but retain performance. If you do what you always did, you will get what you always got», Mr. Poirier said. He also gave examples from the riser development on the Sapinhoa-Lula field, the first pre salt field that was developed in the demanding Santos Basin.

«100 km of rigid lines were installed, and the was only achieved because of innovation», he said.

«Innovation is something new that is better than what was before. It breeds efficiency and growth», he said.

The opening remarks at the event were given by Norwegian Consul General Helle Klem and her colleague of Advantage Austria, director Christoph Robertson.

«Innovation and efficiency is a very timely topic, and as it coincides with the delivery of the first cranes manufactured in Brazil, I would like to congratulate you. Suzana Barros was one of the first people I met when I came to Rio. At the time she was running a one woman´s show, now you are 22 people. It is an amazing success story that inspires and demonstrates that it is possible to do well in Brazil even though it requires hard work», Mrs. Klem said.