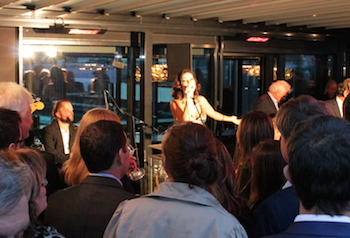 Not even the chilly Norwegian summer temperatures could take the heat off the Brazilian party held at an exclusive roof top restaurant in Oslo on June 3, 2015.

More than 150 people had confirmed their presence for the party, making it one of the most popular social events during Nor-Shipping 2015. A lot of high profiled guests were to find on the guest list.

The Brazilian Summer Party took place at «The Thief», one of Oslo´s newest and most exclusive hotels located at Tjuvholmen in the Norwegian capital. The hotel is part of 200 carefully selected design hotels all over the world, with distinctive architecture, a hotel concept established by Claus Sendlinger in 1993.

«This is a good image of Brazil and what we want to show the Norwegians. It is important for all of us to meet outside of the office», NBCC president Camila Mendes Viana Cardoso said during the party.

So when the first guests started dancing to the catchy Brazilian music performed by artist Liah Soares, the lively crowd simply hit the roof. The CEO of Solstad Offshore, Lars Peder Solstad was also among the guests, and seemed to be enjoying the party, the music and the company of so many other high profiled guest.

«We would like the Brazilian summer party during Nor-Shipping to become a tradition. Our networking dinner in Rio de Janeiro during Rio Oil & Gas started just like this. The secret is to work together and co-host events like this. The party is a result of a hard work by a great team, and without the support from Abran and NSA, we would not have managed to host this great event», Mrs. Viana Cardoso says.

Focus on Brazil
The Nor-Shipping expo is a bianual maritime event and actually the largest such event of the year, not only in Scandinavia, but also in Europe.

Vice-Admiral Marcos Nunes Miranda, his wife Stephania and Erik Hannisdal, of Inventure Management.More than 35.000 delegates attended different activities during the Nor-Shipping week 2015, and the number of exhibiting companies this year, was 972. A 60 people strong Brazilian delegation was also present at Nor-Shipping 2015, taking place in Oslo from June 1-5.

For the first time during Nor-Shipping, a seminar dedicated to Brazil was organized. The ambition was to give the Nor-Shipping delegates insights into the risks and rewards of doing business in Brazil during the global maritime event. About 300 people participated at the Brazil sessions on June 3, 2015.

High profiled guests
More than 200 social events took place during Nor-Shipping 2015, and the guest list for the Brazilian summer party at The Thief was full of VIPs and top executives, clearly demonstrating the importance given to the Brazilian maritime and offshore market by Norwegian stakeholders and investors.

From the left: Kristian Siem, Camila Mendes Viana Cardoso, Rachid Felix and Arne Christian Haukeland.Norwegian investor and founder of Siem Industries, as well as chairman of the board of Subsea7, Mr. Kristian Siem, was among the guests. The newly appointed president of DNV GL, Mr. Remi Eriksen was there, accompanied by DNV colleagues like Mr. Jonas Mattos and former Brazil managers Tommy Bjørnsen and Terje Staalstrøm.

«It was a great party and a great evening, a lot of people were present, and even the state secretary and several top managers found their way to this event», Mr. Staalstrøm comments.

The Norwegian Deputy Minister of Trade, Industry and Fisheries, Ms. Dilek Ayhan and several of her closest advisors were also present at the cocktail party.

«This is the second time I visit Norway. I have a Norwegian boyfriend and spent last Christmas with his family in Norway. I saw snow for the first time and event the northern lights. Coming back to perform is however a different experience, with a special taste», Liah Soares said after the show, where she performed her own music as well as several Brazilian classics.

NBCC president Camila Mendes Viana Cardoso and her team chose The Thief as location for the popular party because of the possibility of having live music, and after hearing Liah Soares sing at the Brazilian party, Nor-Shipping boss Vidar Pederstad invited Soares and the band to play at another party the next day, the Nor-Shipping 50th anniversary party, that took place at the Astrup Fearnley Museum in the Oslo harbor, with a total of 1200 guests attending. Unfortuneatly, Ms. Soares was returning to Brazil the next day, but there will for sure be opportunities for her in Norway in the future.

Photo courtesy of Nor-Shipping.Nor-Shipping is the longest running event of event of its kind, and the 50 year anniversary was celebrated  on June 4, 2015. This celebration ended with a great fireworks in the Oslo harbor.

“Nor-Shipping is unquestionably the leading maritime event week. For 50 years, we have been proud to provide an arena that helps position the industry for the future,” Nor-Shipping Director Vidar Pederstad says in a press release.

The barbecue at the DNV GL headquarters just outside Oslo is another very popular social event during the global maritime event.