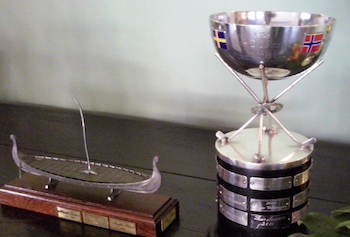 The traditional Scandinavian Cup took place at the Itanhangá Golf Club the last weekend of April.

The Scandinavian Cup traveling trophies.The cup is a true Scandinavian tradition, taking place at the Itanhangá Golf Club since 1951. The Golf Club itself was founded in 1933, and former president Getulio Vargas was a passionate golf player who spent many weekends at Itanhangá, to take a break from his busy political life.

Today a substantial group of Scandinavian golf enthusiasts find peace and distraction at the club, still a meeting place to business leaders, politicians and other distinguished members of society.

«It was a group of Scandinavians who played at Itanhangá that founded the cup back in 1951, and the cup has been played almost every year since, with a few exceptions. I myself have been involved in organizing the event since the 1990-s. It is mainly an event for Scandinavian golf players, but we also invite other members of the Itanhangá Golf Club», Bjorn Salén, from Brazilship/Scanbrasil, explains.

Family effort
This year´s Scandinavian Cup, sponsored by Brazilship/Scanbrasil, Statoil DNV GL and Fiat Lux, was held at April 26 and 27, and had about 10 participants. According to Mr. Salén, the average participation is about 20 people, but many were away on business travel this particular weekend.

«The winner is awarded a beautiful traveling trophy. The trophy actually disappeared without a trace for a few years, but reappeared at the Gavea Golf Club and was returned to us. Besides the main trophy, we have an award for beginners, in the shape of a viking ship, provided by Hydro a few years back. The participants of the beginners category play at the smaller course at Itanhangá, and was created as an incentive to newcomers», Mr. Salén explains

This year´s winner was Kjetil Solbrække, CEO of Instituto Sintef do Brasil, and this is the second time he wins the cup. His son Oskar Solbrække won the beginners trophy this year. In other words an exceptionally strong family effort, also considering that it was Oskar´s first golf tournament ever!

«The Scandinavian Cup is a great event, and I have participated several times before. It´s a great opportunity to meet people outside of the office, and if anyone would like to join us, or maybe try out golf for the first time, they are welcome to contact me. I´ll be happy to invite them to Itanhangá as my guests», Mr. Solbrække says.

Winner Kjetil Solbrække (to the left) and organizer Bjorn Salén.The longest drive and the nearest to the pin was also rewarded during the cup.

According to Bjorn Salén, the Scandinavian Cup is a great meeting place in pleasant surroundings.

«It is a great way for the Scandinavians in Rio de Janeiro to come together, especially those of us that are playing golf. To newcomers in Rio de Janeiro it is a way to get easy access and quickly get to know the Scandinavian business community in town. New people are constantly arriving, new people are being posted here, the renewal is constant, but we also have some veterans who have been playing with us for years », Mr. Salén says.

Networking dinner
The lovely Itanhangá Golf Club is also the venue for the NBCC event of the year, the Rio Oil and Gas networking dinner, this September. In 2012, more than 600 guests were present at the dinner, and CEO of Sete Brasil, Mr. Joao Ferraz and the Norwegian Deputy Minister of Petroleum and Energy, Mr. Per Rune Henriksen,  were among the many distinguished guests.

The event is considered a highlight of the year, and will take place for the 5th time on September 17, 2014.

«The event is a great opportunity for Norwegian companies to promote themselves», Consul General Helle Klem said in a comment during the networking dinner in 2012.

On Friday September 19, a tournament for players in the oil and gas industry will take place at the Itanhangá Golf Club, another event during the busy Rio Oil & Gas week in Rio de Janeiro. About 70 players participated the last time the tournament took place, in 2012.

Mr. Salén also informs that the organizers are always looking for new sponsors, in case any company in the Scandinavian business community should take interest.