Preparing the ground for a new cycle 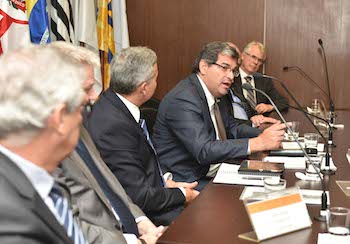 NBCC seminar on an oil and gas industry in transition, and the challenges and opportunities this transition generates for the supplier industry.

The seminar took place in the Fecomércio building in São Paulo on September 28, 2016, and was organized by NBCC with the support of IBP. IBP president Jorge Camargo and Statoil´s top executive in Brazil, Pål Eitrheim were among the high profiled speakers at the event.

A new cycle is beginning, Mr. Camargo said in his industry outlook to the seminar.

«Cost is at the core of every debate about future perspectives of our industry and competitiveness is the critical factor for the development of pre-salt. We are facing a new technological frontier», he said.

Mr. Camargo also compared the Brazilian regimes to other fiscal regimes around the world, and presented a list of seven actions that need to be taken:

«The local content model, multiple operatorship, regulatory and fiscal stability, environmental licensing, bidding rounds and the development of gas production are actions on the competitive agenda of the industry. Multiple operators, a waiver clause for local content and the taxes the state of Rio de Janeiro want to charge, are among the most urgent items on the list», he said.

Mr. Camargo defended more flexibility in the local content requirements and described it as «fundamental» to focus on areas where Brazilian industry has competitive advantages.

Crossroads
«We live in times of transition and volatility, and our industry stands at a crossroads», Statoil executive Pål Eitrheim said in his address to the event. Statoil is developing its biggest offshore operations outside Norway in Brazil, and the Norwegian company has invested nearly $10 billion in Brazil so far. Recently, Statoil took over as operator on the large gas and condensate discoveries in BM-C-33, and also acquired Petrobras´ 66 percent operated interest in BM-S-8, which includes the giant Carcará discovery.  Mr. Eitrheim referred to both fields as «world class».

«Actions speak louder than words. Our ambition is to become the leading international operator in Brazil. The industry is currently more constrained by budgets than barrels, and we are up against a joint competitiveness challenge that neither of us can solve alone. In a reality of resource abundance and capital scarcity, I welcome the ongoing discussions about framework conditions in Brazil» he said and recommended many of the same adjustments mentioned by IBP´s president.

Local content was a recurring topic during the event.

Predictable fiscal frameworks, an effective regulatory system, a competitive supply chain and diversity of operators are characteristics Brazil should seek, according to Mr. Eitrheim. This means extending the Repetro regime, allowing for multiple operators on pre-salt fields, adjusting the local content regulations and improving the conditions for new licensing rounds.

«I represent a company eager to invest and create more jobs in Brazil. The current downturn provides a unique opportunity to join efforts and make tough but necessary adjustments», Mr. Eitrheim said.

Biddig rounds
Renato Bertrani, the CEO of the medium sized private oil company Barra Energia, agreed with the Statoil executive. He considers the long term scenario of the Brazilian oil and gas industry «very rewarding for those making the right decisions now».

«Several regulatory improvements are required to attract investments, and the key to unlock acreage and attract huge investments is to end the sole operatorship obligation for Petrobras and reconsider the bid round calendar».

Lincoln Rumenos Guardado, CEO of Queiroz Galvão EP talked about his company´s aspirations for the future and also stressed the importance of the 2017 bidding rounds. He also suggests a local content percentage of 40 instead of 60 percent.

Dilemma
Juan Arango, head of OneSubsea in Brazil, pointed out a dilemma that the company he represents, as well as many other industry players, are having.

«Petrobras is scaling back its investments and renegotiating contracts with all its suppliers, even those not involved in the investigations. This renegotiation is being made in order to adapt to the reality of its financial condition and also due to the lower global oil prices. OneSubsea doubled the manufacturing and repair / service capacity in order to respond to Petrobras´ plans back in 2009 and 2010 to drastically increase production. The reality is that there are additional manufacturing capacity not being fully utilized that could be utilized to export Subsea equipment to countries outside of Brazil. The issue at hand is the lack of desperately needed support from the Federal and State Governments to allow export», he said

Paulo Cintra represents CFPS Engenharia, a multidisciplinary engineering company established in São Paulo since 2012. He believes Brazil needs incentives to open up the country´s oil and gas sector to greater private sector participation and that the Petrobras divestment program will generate new opportunities.

«The engineering segment needs to be ready for the challenges», he said. But he also admitted that the technological and logistical challenges that the pre-salt reserves represent, will require international exchange of knowledge

The São Paulo State Secretary of Energy and Mining, Mr. João Carlos de S. Meirelles, talked about the opportunities in the development and production of natural gas in the Santos Basin.

«The state of São Paulo would like to attract new players and new investments in the oil & gas and supply chain, especially within exploration and production. Petrobras is divesting in new areas , and we are against charging new taxes from operators», State Minister João Carlos de S. Meirelles, said.

The opening and closing remarks were given by NBCC president Erik Hannisdal and Managing Director of DNV GL Oil & Gas Alex Imperial.

«In today’s reality, companies in the O&G industry face the challenge of continuing to find ways to increase cost efficiency, and reduce opex. But at the same time they have to address increasing technical complexity, maintain production and integrity levels in mature fields with ageing assets, and lastly, they have to demonstrate compliance with more stringent regulations and HSE requirements, in a much more transparent way. Success will depend on new ways of working. We in DNV GL have been collaborating with the industry to achieve cost reduction and efficiency in a safe way, by reducing complexity, increasing standardization, and analyzing increasing volumes of data to manage risks», Mr. Imperial said.

Mr. Imperial was also the moderator of a panel debate with the participating speakers.

The event was followed by a light lunch and the opportunity for networking for the 90 participants.