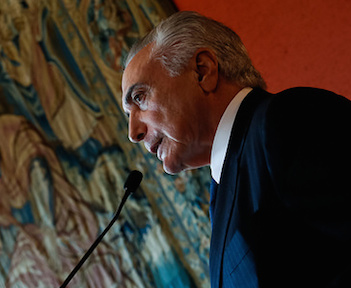 Brazil´s president Michel Temer was in Norway to convince Norwegian stakeholders that Brazil is an attractive destiny for investments.

10 years have passed since the last time a Brazilian president visited Norway, and after two days in Russia, Michel Temer arrived in Oslo on June 22, 2017. Brazil´s ambassador to Norway, George Prata, and Norway´s ambassador in Brazil, Aud Marit Wiig received the president and his delegation at the airport.

In the Norwegian capital Michel Temer met with Norway´s King Harald V, Prime Minister Erna Solberg, the president of the Parliament, Olemic Thommessen and with other government officials.

According to the Norwegian Embassy in Brasilia, the purpose of the visit is to strengthen the bilateral relations between the two countries even further, espeicially within trade. Brazil hopes to see Norway increasing investments in Brazil, especially within energy, environment, science, technology and innovation.

Investor conference
The main event on the agenda on June 22, was a meeting in the Norwegian Shipowners´Association (NSA), where president Temer met with representatives from NSA, from the Confederation of Norwegian Enterprises (NHO) and from the maritime industry. The meeting, a business round table conference, was organized by the Brazilian Embassy in cooperation with NSA, NHO and the Brazilian Chamber of Commerce in Oslo (BNCC).

The conference was opened and also chaired by NSA president Hans Olav Lindal, and Temer´s speech was streamed live online. To see the full speech, click here. Scroll down to «All videos».

«I want to share a message of confidence with you. Brazil is leaving the crisis behind us, needed reforms are being implemented, and the agenda of my government is now recovering growth and bringing investments back», Mr. Temer said.

The Brazilian president explained how dialogue and cooperation with Congress and also with the private sector is important to the Temer administration.

«Dialogue is key and we would like to facilitate the life of entrepreneurs and investors. We want to listen and we want to build bridges», the Brazilian president said. He also explained the different measures his government is taking, on limiting government spending and reforming the pension system, among others, and how legal and regulatory framework is being adapted to facilitate partnerships, especially within the energy sector.

«We are counting on Norwegian companies participating in the upcoming bidding rounds, and we want to see more Norwegian investments in our country», Temer said. In 2016, Norway was the 8th biggest investor in Brazil, with investments totalling US$ 2,1 billion.

«The Norwegian presence is particularly strong in the energy sector, but we hope to see new investments in a variety of sectors. We also hope to increase trade between our countries, as negotiations between Mercosul and EFTA is progressing. There are a lot of reasons for investing in Brazil and investing in Brazil is a win», Temer concluded.

«Your visit is a confirmation of our strong friendship and we are very pleased that you are here. Times have been challenging for all oil-producing countries, but Norway has a long term commitment to Brazil. The Norwegian government is satisfied with the measures taken, and in particular with the structural changes resulting in an opening up of the energy sector. We are ready to participate, and Norwegian companies are ready to deliver», Mr. Brende said.

15 Norwegian companies gave brief presentations to the president, and after the round table session, informal talks between representatives of the two countries took place. At night, a reception for the Brazilian president took place in the offices of NSA.

Deforestation
The Norwegian support to curb deforestation in the Amazon forest was also on the agenda for the presidential visit. Only one week before Temer´s arrival in Oslo, Norway´s Minister of Environment Vidar Helgesen sent a letter to his Brazilian colleague Sarney Filho where he questioned the efficiency of the Amazon Fund as deforestation has been increasing the last year. Mr. Sarney accompanied Mr. Temer to Norway, and in a meeting between the two ministers, the Norwegian government in fact signalled that the Norwegian support will in fact be reduced this year.

«Our payment this year will be reduced, because the rules of the Amazon Fund means that the increase in deforestation in 2016 limits the maximum payments that can be made on the basis of that result to well below what we have contributed annually since 2009. This should not in any way be understood as a weakening of our commitment to the partnership», Norwegian minister of climate and environment Vidar Helgesen stated.

In the meeting, Prime Minister Solberg expressed concern with the ongoing investigation of corruption involving top politicians in Brazil, and said that a solution is needed. President Temer assured her that the Brazilian democratic institutions are working, and that a clean-up is under way.

«The fact that the Brazilian president chooses to visit Norway as one of the first countries in Europe that he visits, demonstrates that Norway is an important partner to Brazil», Prime Minister Solberg also said.