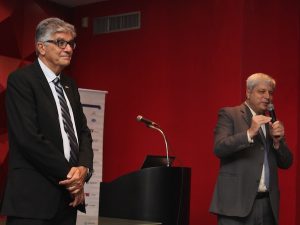 Rachid Felix and Marcio Felix (to the right).

The Annual General Meeting on March 19, 2018 re-elected the NBCC president in an event that featured O&G secretary Marcio Felix as guest speaker.

Marcio Felix is the Secretary for oil and energy in the Brazilian Ministry of Mines and Energy (MME),  and in his presentation to the AGM, he talked about the new scenario ahead for the Norwegian oil and gas industry in Brazil. He focused on the importance of selecting battles as time is running up for the current administration. Mr. Felix would like to see Rio de Janeiro consolidating its position as the petroleum capital of Brazil.

«We only have a few months left to get things done, and among our current priorities is the new gas bill «Gas to Grow». We are working very hard to get the bill through Congress, first in the lower house in April and then in the Senate in May or June. We are in dialogue with different stakeholders and intend to reach a common understanding by the end of the month», Mr. Felix said. 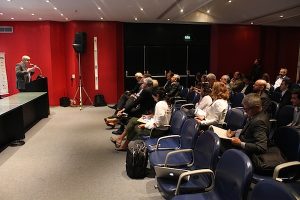 Another important topic on the ministry´s agenda is the waiver on local content.

«Next week we hope to reach an agreement on the new regulations that will authorize ANP to grant local content waivers, during a meeting in the National council of energy policies (CNPE). We are very close to a solution», the secretary guarantees. 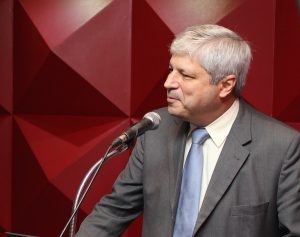 Secretary Marcio Felix spoke at the AGM of NBCC for the second year in a row.

«I am confident that we are progressing and we are working to announce a common understanding with Petrobras by May.»

Bid rounds on the transfer of rights areas are scheduled for September.

Looking forward, Marcio Felix lists three topics that need to be given priority by both government and industry: «Environmental permits, the complex Brazilian tax regime and a new approach to R&D are issues that need our attention», Mr. Felix says.

NEW BOARD MEMBERS
His presentation was part of the Annual General Meeting of the Norwegian Brazilian Chamber of Commerce this year. The AGM took place in Botafogo on March 19, and re-elected Rachid Felix (Valor Mais Business Consulting) as president of the chamber. Alex Imperial of DNV GL is the new Vice-President in Rio de Janeiro. Juliana G. Meyer Gottardi continues as Vice-President in Sao Paulo and Johnar Olsen continues as treasurer. Among the new board members are Marcelo Xavier (Subsea7), Marianne Nilsen (Jotun) and Øistein Johannessen (Statoil). 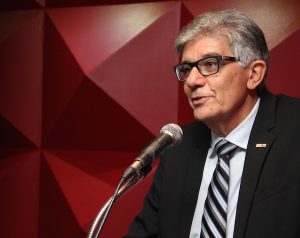 During the AGM, the NBCC president presented the annual report to the members present, and highlighted how the chamber has managed to maintain a stable number of associates, despite the crisis. The chamber currently has 120 members, and while some members left, mainly due to cost reductions, 19 new companies joined the chamber.

«This last year we participated in the Brazilian delegation to Nor-Shipping for the second time, and we had an active participation in the oil and gas agenda and a good presence in the crisis scenario. We also signed partnership agreements with IBP and with the European Chambers of Rio de Janeiro.»

Decommissioning and how to unblock R&D funds in Brazil will be priorities in the NBCC-IBP partnership. 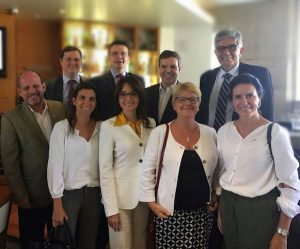 Some of the working committee coordinators, accompanied by NBCC executive director Glorisabel Garrido Thomspon-Flôres and Consul General Sissel Hodne Steen, during the AGM 2018.

RIO OIL AND GAS
Treasurer Johnar Olsen presented the financial report. NBCC ended the year above budget and with a solid cash position.

2018 will feature a variety of events, with the Rio Oil and Gas Networking dinner being one of the most important events.

«2018 is a very important year for us, and the Rio Oil and Gas Conference and Exhibition is more important than ever. Close interaction between companies, government and other entities is fundamental. Recovery is now a reality and investments returning, but in a more selective way. Brazil could be a main destination for deepwater development but there are still challenges to be addressed. Competitiveness is a key word. The October election is a concern, and Rio de Janeiro is still struggling to find its way», Rachid Felix said in his closing remarks to the AGM.