Ready for the first joint call 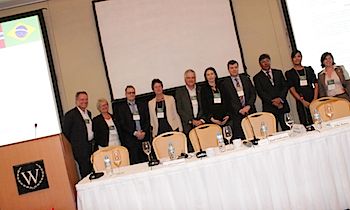 Less funds available for R&D in a market in crisis should provide a rationale for increased collaboration between Norway and Brazil.

This was one of the conclusions drawn at the third November Conference, held in Rio de Janeiro from November 23-24, 2015. Great progress has been made since the first conference in 2013, when the BN21 agreement on increased R, D & I collaboration was signed, and the launch of the first joint call by The Norwegian Research Council and the Brazilian innovation agency Finep was celebrated during the opening of the November Conference 2015. An outstanding achievement, according to Consul General Sissel Hodne Steen.

The first joint call will take place no later than in the beginning of 2016, and at the November Conference 2015, the plans were presented by Elias Ramos of Finep and Siri Helle Friedemann, director of the oil and gas division of The Research Council of Norway (RCN).

«This call will make funding available for joint projects, and we want to stimulate partnerships. Together we can make a difference, especially in the oil and gas sector. Without the knowhow and investments of foreigners in the Brazilian oil and gas sector, our oil would have stayed below ground. Norway plays a key role», Elias Ramos, representing the Finep said.

Siri Helle Friedemann and Alexandre Garcia.According to Siri Helle Friedemann, the thematic scope of the joint call would be challenges within the offshore petroleum industry in Brazil and Norway, and relevant applicants would be companies. RCN is also working on a joint call with CNPQ, and she listed several lines of action taken last year, to step up the cooperation. Innovation Norway and RCN are co-funding a consul for science and technology at the Norwegian Consulate General in Rio de Janeiro, and a Brazilian fact-finding mission to Norway has taken place.

«We have achieved a lot and the announcement of the first joint call between RCN and Finep here today is an important milestone. We have tools, and it is only a matter of using them», Siri Helle Friedemann said

Several key players from Norwegian and Brazilian R&D institutions were invited to speak at this year´s conference.

«The first joint call will start a new era and pave the way forward», Conference Chair Kjetil Solbrække said in his opening remarks.

«Bilateral agreements like the BN21 are valuable tools, but they depends on somebody taking action, and we when glance through program of this conference, we see nothing but action. This makes me confident that new cutting edge solutions in a difficult time for the sector, are on their way», Consul General Sissel Hodne Steen said.

According to the chairman of Innovation Norway, Per Otto Dyb, Norwegian companies invested USD 20 million in R&D projects in Brazil in 2014.

Mr. Per Otto Dyb.«By collaboration we can solve a multitude of problems and contribute to increased value creation. Nobody is able to solve future challenges alone. The main focus of Innovation Norway is to move knowledge into industrial use», Mr. Dyb said.

Network
But there are obviously still challenges to overcome, and how to enhance the collaboration further, to the benefit of both countries, was subject of discussions during the conference. Clearer priorities and higher volume were expressions used by many of the speakers.

Rodrigo Bacellar from BNDES talked about cooperation as key to overcome the current crisis scenario and develop new technologies. BNDES is the main provider of long-term financing in Brazil and supporting innovation projects is a priority.

«This is a sector in transition, where investments are being reduced and the need for reducing operation costs and increase flexibility and productivity is great», he said. Mr. Bacellar also argued that the Brazilian pre-salt is robust and sustainable, and listed the main technological challenges that BNDES has identified. Subsea systems, topside equipment and down hole are on this list.

Fabiano Lobato (to the left) and Eduardo Santos.Dean Morten Dæhlen from the University of Oslo is satisfied with the development and the network that is being built in both countries, but sees the need for building more volume in the cooperation. The University of Oslo have had 18 Brazilian PHD candidates in 2013 and 2014, 63 master degree students from 2012-2015 and 95 inbound exchange students from Brazil from 2011-2015.

PUC-Rio is part of this network, and Luiz Mello presented the Brazilian university to the conference. PUC-Rio has a regional center of expertise in oil and gas, and do research in all areas of the supply chain, from well to pump.

«Norwegian partners are the second largest group only behind Petrobras», Mr. Mello said.

Alexandre Garcia talked on behalf of CNPQ (National Counsel of Technological and Scientific Development) at the conference. CNPQ offers scholarships to researchers, and the agency is cooperating with Statoil through the Science without Borders program

«We want to expand our partnership with Norway and with Statoil», he said.

In a panel debate following the first session at the conference, Helle Moen, director of Innovation Norway in Brazil, expressed satisfaction.

«We could always have done more, reached further, have gotten more money, but we do have clear intentions on what we want to cooperate on, and as it was mentioned here, RCN has already funded more than 60 R&D projects with Brazilian partners. This shows that you are responding. But we need to be able to balance the long-term approach with being able to operationalize our intentions and deliver real plans on a shorter term», she said.

Not our responsibility alone
In their presentations to the conference, the representatives from Statoil and Petrobras warned that «we cannot do all the work alone». Eduardo Santos is the manager at Cenpes, the Petrobras research center at Ilha do Fundao.

Well construction and decommissioning are among the focus areas of the Cenpes staff. In 2014, Petrobras invested USD 265 million R&D institutions and universities, and Petrobras has 199 contracts with Norwegian companies and institutions. The Doris project, visited by Norway´s Crown Prince Haakon last week, is only one example.

«Our cooperation with Statoil is particularly successful, with 7 projects in our portfolio. Today we need you to bring us good projects, because the funds are available, due to the ANP R&D clause», he said.

Fabiano Lobato is the manager at Statoil´s research center in Rio.

«BN21 is a great example on how Norwegian and Brazilians can collaborate, envisioning the development of new technologies. But these are challenging times, and as a consequence of the low oil price, we have less budget and smaller margins», he said.

In the discussion that followed, where Senira Kattah of PGS and Rafael Rabuske of Concremat also participated, Eduardo Santos identified the obsolete intellectual property law as a problem to spin-off companies and start-ups in Brazil.

Mr. Lobato argued that an increased coordination of action is needed.

«Statoil and Petrobras can´t do everything in the BN21 agreement, it is not our responsibility alone, and we need to coordinate our efforts better, and work on connecting different players. It is also important to get the ANP involved to make sure that future initiatives fall within the R&D clause», Mr. Lobato said.

In a plenary session, conclusions were drawn and suggestions made.

«An increased and more systematic contact between researchers in our two countries is one of the main achievements», Conference Chair Kjetil Solbrække, concluded.