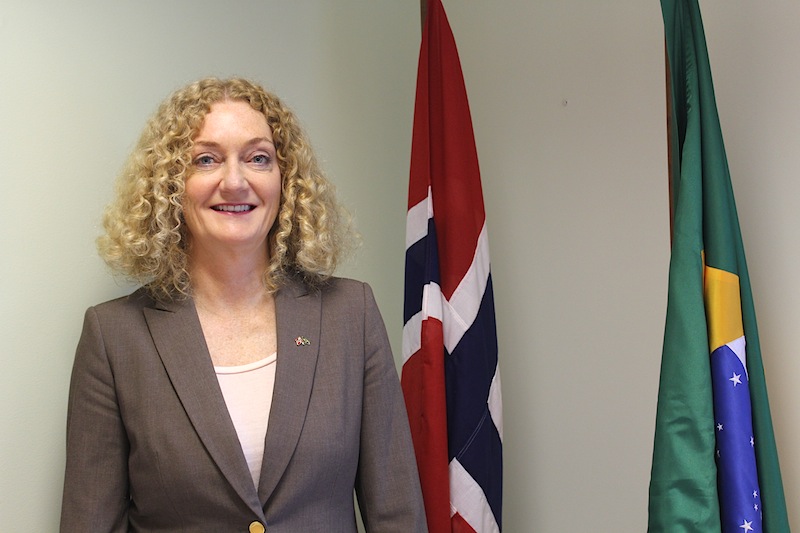 «I am very happy to be here! The Rio station was on top of my list», says Fosland, experienced Norwegian diplomat with postings in Washington and Helsinki on her curriculum.

Ms. Fosland holds a Cand. Polit. in Social Anthropology from the University of Oslo, and comes from a position as Director of for the Data and Analytics Section in the Norwegian Ministry of Foreign Affairs. She was also the Director of the Section for Information Management in the Ministry, and served as Deputy Head of Mission at the Embassy in Helsinki from 2009-2013 and First Secretary in the Embassy in Washington DC from 2006-2009.

Road trip
Marianne and her Danish husband Lars arrived in Rio de Janeiro in the beginning of June, and the warm Brazilian winter immediately amazed her. But when Nordic Light sat down for a chat with Ms. Fosland in Mid-July, it was actually the low temperatures that had taken her by surprise, she admits.

Maintaining a solid relationship with the Norwegian companies in Brazil, is a priority to the new Consul General, and she has already initiated a «road trip», visiting the huge number of companies and institutions present in Brazil.

«The promoting of Norwegian commercial interests abroad is one of the foreign service’s main tasks. In order to do so, it is vital that the official Norway join forces with relevant companies and business sectors. Brazil is a very important market for Norway, and my main objective is to be as well informed as possible on all the activities going on, on opportunities and challenges, and to discuss how we can be of mutual benefit in our different roles. We need to talk on a regular basis. So far I have been very well received everywhere I go, and Norwegian stakeholders can be reassured that we have a huge apparatus to accommodate them and their needs», she says.

Synergies
The new Consul General is convinced that both Norway and Brazil has a lot to benefit from an even closer relationship in the coming years.

«Brazil is going through political and economic changes that are very interesting to follow. I would like to continue the good work that my predecessors and brilliant co-workers at the consulate have been doing, working in close relationship with Team Norway and Norwegian companies on issues that are important to Norway.»

Marianne Fosland lists several examples, such as developing and exchanging technical expertise in the oil, gas and energy sectors.

Ms. Fosland skiing back in Norway.

«Brazil and Norway have a lot of synergies when it comes to offshore technologies and a strong record of cooperation that dates back to the beginning of offshore exploration in Brazil. Both countries have a lot to contribute with each other when it comes to subsea and deepwater technologies, mature fields, resource and data management, digitalization, renewable energy and, of course, safety and the environment. A safety culture and greener operations is in Norway’s DNA and there is a lot of room for both countries to exchange best practices», she says.

Partnerships within R&D and the exchange of students between the two countries are other areas of collaboration.

Fish lover
Marianne Fosland was born in the Norwegian capital Oslo, but grew up in Tromsø. As a true daughter of Norway, she loves skiing in the mountains. She also loves cod fish and a traditional dish called «mølje» . She probably won´t ski much in Rio de Janeiro, although a former Equinor director was observed on roller skies in Copacabana a few years ago. But there is certainly enough bacalhau here to help her soothe the pain if she gets too homesick.

«Mølje» is a dish that has a long tradition in Norway. Eaten along the coast in winter, it’s a protein-packed nose-to-tail dish using the roe, fillet and creamy liver of the cod.

In addition to cooking «mølje», literature, hiking and biking are among her favorite pastimes.

« I also read a lot and love going to concerts, all kinds of music, from metal to opera», Ms. Fosland says. A closer cultural collaboration is also on the to do-list of the new Consul General, and culture is also an important part of promoting Norway, according to Ms. Fosland. Several Norwegian artists are planning tours to  Brazil. Another Norwegian film festival is also being planned.

Through Norwegian movies and music, Brazilians will get an impression of the Norwegian language and culture. The barriers created by languages is something that Marianne Fosland has always taken seriously, and this explains why she has basic knowledge of Finnish among her language skills. Now, Portuguese grammar and pronunciation is taking up a lot of her time.

«Language is the basic in the understanding of cultures. I have been in Brazil several times as a tourist, but this is the first time I am here as a professional. I am very enthusiastic and look forward to spending four years here», she concludes.