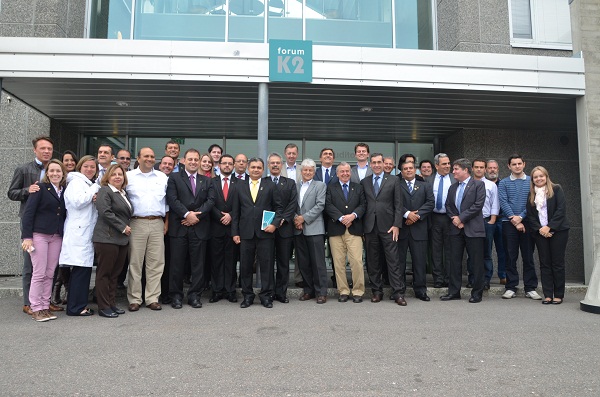 Rio de Janeiro is ramping up plans to develop a subsea cluster in the city and hopes to attract investments, stimulate technological innovation and create fruitful partnerships in the subsea sector. The Norwegian cluster model is being used as an inspiration.

In the end of June, State Sub-Secretary of Energy, Logistics and Industrial development, Marcelo Vertis, headed a 23-strong delegation to the Underwater Technology Conference in Bergen, Norway.

The objective was to deepen the work for the structuring of a subsea cluster in Rio de Janeiro and elaborate the institutional cluster model. In Norway, clusters like NCE Subsea and NCE Node have been vital in developing a local supply chain, and this is a model that Vertis would like to use as a base to be adapted to Brazilian reality and market regulations.

“The main objective of this effort is to attract investments in the subsea supply chain to Rio de Janeiro, maybe as much as 2-3 billion USD over the next two or three years. The exploration of pre-salt will create a demand in the market for this kind of products and services, and a lot is already being invested in the region. The subsea sector is in its essence a technology sector, always seeking new, innovative solutions to deeper water and more demanding conditions. Petrobras is an important player in the technological development in Brazil and internationally, much like Statoil in Norway. Several big companies are already present, and we would like to attract more sub-suppliers to strengthen the supply chain further. Another objective is to create and stimulate partnerships between the companies in the sector, partnerships that could take the research and development of new technology to an even higher level”, Mr. Vertis explains.

“We have identified about 80 smaller and medium sized sub-suppliers, and we are working to map the future demands of the industry and to find out how we can attract the companies who are not already based in Rio, to consider establishing here. Our task as authorities is to create a good business environment, facilitate and eventually try to understand the difficulties they are experiencing in order to assist them in the best possible way”, Mr. Vertis says.

The state of Rio de Janeiro has two development agencies, linked to the Secretary of Economic Development, created to aid local business and foreigner investors who wish to invest in Rio. CODIN is a state agency that offers help with logistics and infrastructure, like site location, while AGERIO is an agency offering financing at competitive terms.

According to a study conducted by ONIP, 35 of the 80 subsea companies in Brazil, have expressed interest in being a part of the cluster. While there are a handful of big multinationals, there are a lot of smaller software companies developing cutting edge technological solutions among them.

“We would like to see new partnerships between them, as well as an increase in the technological cooperation between important players in the sector”, Mr. Vertis says.

During the trip to Bergen last month, the Brazilian delegation visited several Norwegian companies, had meetings with the cluster NCE Subsea, visited the Coast Center base in Bergen. Innovation Norway and Intsok were organizing the visit.

“It was very interesting to see how Norway has developed a local supply chain of products and services. Today Norway exports these products and services to the whole world, and this is a model we would like to use – and strengthen in Rio de Janeiro. The sector has a lot to gain by cooperating more closely”, the Sub-Secretary says.

Pull in the same direction

Superintendent Carlos Camerini of ONIP as been studying cluster formation in Norway and the UK for years, and is one of the main advocates of a local cluster.

“I like the Norwegians because they have always been great fishermen, and a cluster is like a big school of fish swimming in the same direction. A cluster is a way to form a group, to protect ourselves and enable us to compete more fiercely. We haven´t had any way to gather the companies in the subsea sector more systematically and see to that they communicate more efficiently and grow, not only in Brazil, but abroad. I also like the Norwegian sense of internationalization. Norway is a small country with limited space to grow, so they decided to look abroad. We’re not going to copy the Norwegian cluster model, but we have certainly learned some important lessons”, Carlos Camerini says.

To him, creating new partnerships is among the main goals of a local cluster, and the Subsea Index, created by the NCE Subsea and several Brazilian partners in 2012, is an important matchmaking tool for the sector.

“The cluster will create new business opportunities, and to Norwegian companies there should be several possibilities. Due to the Brazilian local content requirements, they need to come to Brazil, and the best way is to find a Brazilian business partner”, Mr. Camerini says.