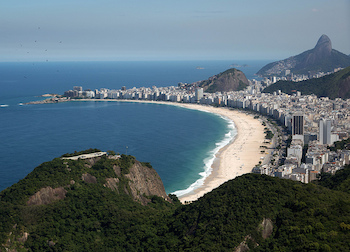 In October, Rio de Janeiro will transform into the “oil capital” of the world. The city, which is already an international marketplace for the sector, prepares to host two of the largest international energy events: the Brazilian edition of OTC, the major global offshore conference, and the meeting of the “energy cities”, World Energy Cities Partnership (WECP), an annual gathering of the mayors of the 22 cities which have energy as a strategic economic sector.

The announcement was made on Tuesday May 5, by Marcelo Haddad, president of Rio Negocios, Edward Stokes, chairman of OTC, Jorge Camargo, president of the Brazilian Oil, Gas and Biofuel Institute (IBP) and Milton Costa Filho, secretary general of IBP, at an OTC Houston press conference.

Between October 25 and 29, Rio will host the WECP meeting, which will have the distinction of gathering, for the first time, as well as mayors and authorities, the “energy cities” commercial delegations.

Also in October, from 27 to 29, there will be OTC Brasil, consolidating the city’s leadership role in the oil sector in Latin America. The event is promoted by the IBP and will have as its theme “The Atlantic: from East to West – An ocean of innovation”.

During three days, there will be discussions on exploration and development of oil and gas, offshore drilling and wells systems, advanced subsea production, and others.

“The idea is that we can gather the top specialists in the world, representing all aspects of the offshore oil and gas industry. The goal is to create a global and wide ranging conference”, explains the president of IBP, Jorge Camargo.

The president of Rio Negócios, Marcelo Haddad, points out that this sequence of events will provide an extra special networking moment for the sector in Rio de Janeiro.

“We organized WECP in order to allow for integration with every player in the business chain. During the first few days, we will have panels in which will be presented scenarios in several areas of the O&G sector. We also reserved a day for the mayors and commercial delegations to participate in OTC Brasil”, explains Haddad.

For Marcelo Haddad, Rio is already a part of the sector’s international business circuit. The city is a strategic decision-making center for oil companies working in the country and also houses one of the largest research and development hubs in the sector worldwide. Proof of that is the fact that the city hosts for over 30 years the Rio Oil & Gas Expo and Conference, one of the largest events for the sector in the world. The 18th edition of the event is already confirmed for October 2016.

Camargo points out that Brazil remains an attractive destination for investments, even facing the largest competition in the sector and the drop in oil prices in the international landscape.

“The pre-salt, overall, is very attractive. The current landscape indicates that we need to trace a positive agenda in search of competitiveness”, he completes.