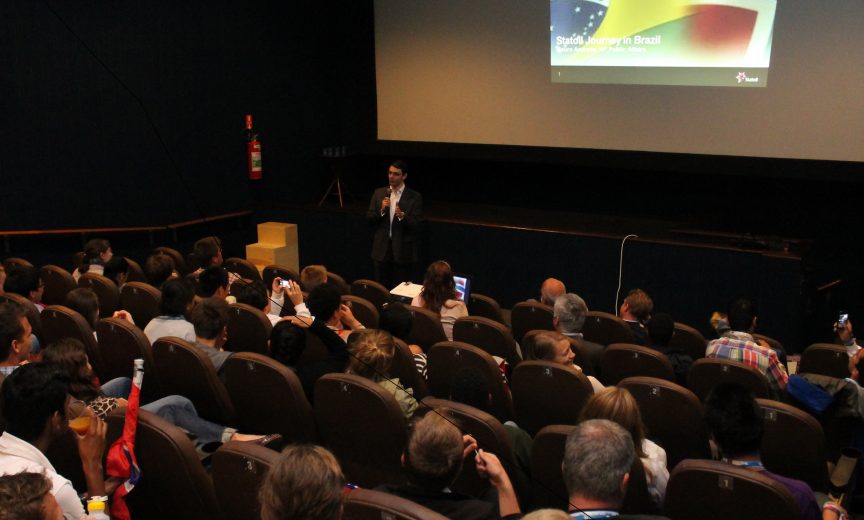 130 young Norwegian Catholics were welcomed by the Norwegian community in Rio de Janeiro on July 23 during an event in Ipanema.

The event on July 23 was organized to give the young Norwegians some insights into how it is to live and work in Brazil.

Pastor Ørnulf Steen opened the event, held at Estaçao Ipanema in Ipanema on July 23, and organized by the Consulate General, the Norwegian Church abroad, Innovation Norway and the NBCC.

“You are important because you are building bridges in a world desperately needing people to build bridges”, Mr. Steen said.

Mauro Andrade, the vice-president of public affairs in Statoil, talked about doing business in Brazil from the perspective of the Norwegian oil company, currently the second biggest oil producing company in Brazil.

“The Norwegian “brand” and Norwegians in general are seen in a very positive way by the Brazilian society, and they are known for doing business in a responsible and transparent way. Brazilians do also love codfish, and we are the biggest importer of Norwegian codfish”, Mauro Andrade said.

Between 2000 and 2008, Norwegian exports to Brazil increased 133 percent, and the Norwegian pension fund has 2 billion USD invested in Brazil.

“Brazil is important to Statoil because the company has decided to grow internationally and to make Brazil one of the 3 to 5 offshore business clusters around the world. We are currently operating the Peregrino field and have 5 exploration licenses”, Mr. Andrade said.

Andre Mundal from the Consulate General talked about Norwegian-Brazilian relations and the Norwegian Brazil strategy. He also gave a security briefing to the crowd of young pilgrims.

“Brazil is becoming more visible on the global map, with more global interests. Norway invested 17 billion USD in Brazil between 2009 and 2011, 65 percent of this was invested in the oil and gas sector and 50 percent of the Norwegian companies in Brazil are operating in this sector”, he said.

Rune Andersen from Innovation Norway talked about the cultural dimension of being Norwegian in Brazil, and gave the audience a brief history lesson.

“In 1501, Americo Vespucci said that if God created a paradise on Earth, it cannot be far from here, This is the image many have of Brazil”, he said.

Daniel Frøland, a student of marine technology at the Norwegian university NTNU in Trondheim gave insights into life as an exchange student in Brazil. He spent one year at the COPPE institute at UFRJ.

Social initiatives like Karanba were also presented to the audience.“I guess I was tired of the rain and the cold weather, and being an exchange student here in Rio was an awesome experience. I made a lot of new friends, and now I feel I have a second home on the other side of the planet. The language was a challenge in the beginning, but today I master Portuguese very well, and I passed all the courses I took”, Daniel said.

“Karanba wants to use football as a way to improve the social situation of underprivileged kids, and we want them to use Karanba as a step stone to a better life”, Jørgen Tengs-Pedersen said.

At the end of the event, a Q&A session was held, and the group appreciated the chance to get to know a bit more about Brazil and being a Norwegian in Brazil.

“It´s great that the Norwegian community in Rio found the time to organize this for us, and we are very grateful. Now we know a bit more about Brazil. It´s not only about carnival and football. We know that Rio de Janeiro is not the capital of Brazil, and it has been a very interesting day”, Oda Maria Verpe and her friend Arielle Osmundsen say.

The mass on Copacabana on Thursday is among the highlights to the girls during the WYD event.

“We are looking very much forward to being a part of this, to meet new people and feel the mood in Rio de Janeiro the next days”, they say.

The youngsters are staying in Barra da Tijuca while in Rio. They arrived in Brazil on July 13 and have spent the first days in Juiz de Fora and Viçosa, Minas Gerais. They arrived in Rio de Janeiro on July 21 and on July 22, they all went to the Corcovado, to see the statue of Christ the Redeemer.

The group participated in several events on the program, and were also planning to participate in the pilgrimage to Guaratiba. But due to the heavy rain the last few days, the events at Campus Fidei, built especially for the events, were transferred to the Copacabana beach.

“We´ll participate at the vigil with the Pope, and on Sunday, we´ll also be present during the final mass”, Paul Maric, on of the organizers of the trip, told the NBCC last week.

On July 31, the group is going back to Norway.