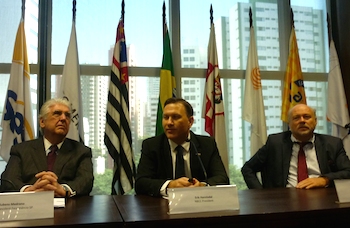 A full day seminar in São Paulo was dedicated to agribusiness and energy, during an event that marked the merger between the two Norwegian chambers of commerce in Rio de Janeiro and São Paulo.

«Agribusiness and Energy – opportunities and challenges» was the title of the event that took place on April 14, 2016.

Knut Karlsen, CEO at Umoe Bioenergy then gave the keynote speech on why agriculture is energy and the implications for business.

«Sugar cane is a key energy source for Brazil, already exceeding hydropower. But only 1 percent of Brazilian land is used to cultivate sugar cane, and it is no threat to the Amazon or Pantanal biomes. Bioenergy is produced where energy demand is highest reducing the need for infrastructure investments, but renewables are still in their infancy», he said in his presentation.

«Traditional solutions are insufficient and we need to move from linear to circular thinking when it comes to energy use and the use of natural resources», he argued, before outlining how Umoe Bioenergy is putting these principles into practice.

Cleiton Vargas of Yara and Helio Momberg of Agrinos also gave presentations on agribusiness. Agrinos works to improve productivity in modern agriculture, based on organic principles. In Brazil 7 percent of the land is cultivated for agriculture, and Agrinos sees a huge potential in intensifying the production of sugar cane and beans, among other products.

«Producing more in the same area is one of the great challenges to humanity», Mr. Momberg said.

Mr. Cleiton Vargas presented Yara and the Yara Brasil timeline, since 1997, when the company established in Brazil as Norsk Hydro.

«Brazil is in a position to be a worldwide breadbasket, as the arable land in Brazil is equal to the size of 33 european countries. The Brazilian agribusiness sector already has a leading position in soft commodities production like orange juice and coffee. Fresh water supply and high technology increasing productivity are competitive advantages.»

Representatives from Statkraft and Windsim talked bout renewable energy at the seminar.

«Brazil´s electricity generation is based on renewable sources (80 percent), which makes it one of the most renewable matrixes in the world. The increase in energy consumption per capita is only one of many challenges», she said.
WindSim provides software for wind farms, and Paulo Alexandre Ferreira of WindSim Brasil sees a great potential in wind power generation in Brazil, despite political and economical instability that affects long term planning.

Closing remarks at the event were given by Norway´s ambassador to Brazil, Mrs. Aud Marit Wiig.

Born in Porto Alegre (RS), Cleiton Vargas is the Commercial Director of Yara Brasil. Vargas has bachelor degree in Agronomic Engineering from the Universidade Federal do Rio Grande do Sul (UFRGS) and has MBA in Marketing from Escola Superior de Propaganda e Marketing (ESPM).

Cleiton Vargas is in Yara for over 20 years and has worked in many positions in the Commercial, Operations and Marketing areas. In Brazil, Headquartered in Porto Alegre (RS) and with a back office in São Paulo (SP), Yara Brasil sells annually 8 million tons of fertilizers, has more than 3000 employees and has 25 terminals, bagging and distribution fertilizers operations with presence in the main agricultural production poles in the country.

Helio Momberg joined Agrinos in 2013, having more than 20 years experience from management positions in large multinational companies, within the fields of Energy, Mining, Pulp and Paper equipment. He has solid track record in Finance, Accounting, Tax and Compliance. Momberg holds a Bachelor Degree in Accounting and Executive MBA in Finance Administration.

Paulo Alexandre Ferreira has an Electronic Engineer  Degree by PUC Rio, and worked with  high technology equipment since 1978. His experience encompass many different areas, from satellites to public  transportation automation. In the last 7 years Paulo dedicated his time to renewable energy  focused in wind and solar grid class projects. Paulo is a member of the Administration Board of WindSim Brasil, a company dedicated to engineering and consulting services for the wind energy segment.

Yves has a Business Administration Degree by FGV-SP, worked in Banking in Europe for 10 years. Since 1996, he started with Corporate Investment Banking and M&A and has already 20 years experience in the same field.Vice-President with WestLB do Brasil, Banco Sudameris Brasil (Intesa-BCI-MIlano), CFO at Nomura Securities (Luxembourg) and different positions with Credit Lyonnais Belgium. From 2003 à 2012, he was elected President of the Belgian-Luxembourg-Brazilian Chamber of Commerce and also was, for 10 years, (2003-2012) successfully, President, Vice-President, General Secretary of the Eurocâmaras-Brasil – Associação das Câmaras de Comércio dos Países da União Européia no Brasil.