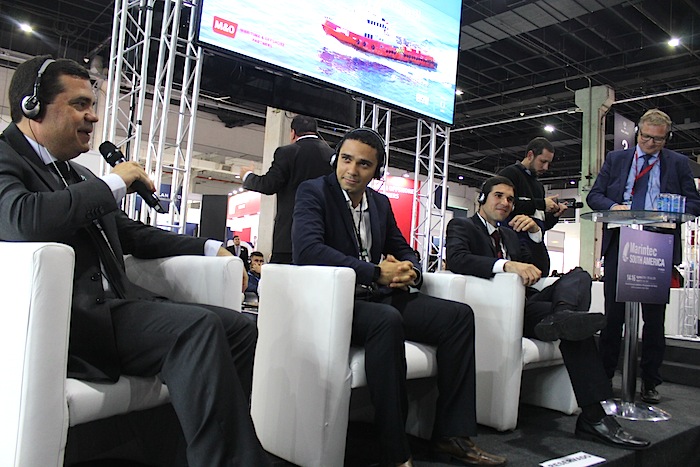 From the left: Ricardo Cesar Fernandes, Roberto Santos and Joao Braz. Jan Lomholdt from MO Partners was the moderator.

An event organized by MO Partners addressed the outlook for the maritime industry in Brazil during maritime exhibition in Rio de Janeiro.

The 15th edition of the maritime trade show and conference “Marintec South America” took place in Rio de Janeiro from August 14-16, 2018, and on the very first day of the event, the seminar «Outlook for the Maritime Sector in Brazil» attracted a crowd in the SulAmerica Convention Center in downtown Rio. It was director Ricardo Cesar Fernandes of Abran who set the stage with a presentation that focused on ocean rather than the maritime sector. Abran is the Brazilian wing of the Norwegian Shipowners´Association.

«I prefer the ocean persecutive rather than the maritime, as it implies an ocean of opportunities, of sustainable exploration of the oceans. Norway has one of the biggest merchant fleets in the world, and Brazil is the main market for Norwegian shipowners outside of the North Sea. New players are entering the maritime industry in Brazil, with new investments, and an higher oil price is also improving the scenario. But from last year we have had a lower economic growth than expected and the fiscal imbalance is still challenging. The upcoming presidential elections also creates uncertainties», Mr. Fernandes said.

The current Brazilian OSV fleet counts 365 vessels, and Mr. Fernandes does not expect any increase the next few years. He did however show statistics on rigs and on cabotage, numbers showing a sector slowly recovering.

«We need an integrated approach and new strategies. Sustainability, new technology and the need to realign strategies to the UN development goals should guide us. The oil and gas sector is recovering, but the ocean perspective can bring even more opportunities, for example within offshore wind and fish farming.»

The second keynote speaker at the event was Roberto Santos, Technical Manager at DOF, a leading shipowner in Brazil with 22 vessels in Brazil and Argentina.

«A reduction in our operational income triggered a discussion on innovation and technological development to reduce cost, and at the moment, we have full focus on OPEX. Our newbuilding program is on hold, but DOF has built 13 ships in Brazil and hope for conditions to build again in the future», he said. Mr. Santos sees several signs of improvement in the market, but says that the opportunities have not yet materialized in results. The upcoming presidential election also concerns him

«We have to take all these factors into consideration when forming our business strategy today», he said. 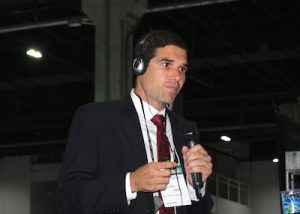 Joao Paulo Braz is the Managing Director of Maersk Suppy Service. The company has 3 AHTS and 2 PSV´s in Brazil.

«Rising oil prices and better offshore project efficiency are improving the cash-flow of our customers, and this is leading to increased CAPEX spending. New projects are being sanctioned, and we believe the worst is behind us. But the industry remains challenges, as 45 percent of the fleet is idle or in layup. There is an oversupply of OSVs in the Brazilian market. At the same time, the Brazilian market has suffered less than the global market, and Brazil is in a good position to recover faster than other markets”, he said.

88 percent of the OSV fleet in Brazil are Brazilian flag vessels, and there has been a 70 percent drop in foreign flag vessels.

The key challenges that Mr. Braz sees for the industry to recover are related to infrastructure, but also to the political risks of the election, to environmental permits, to legislation and to the competition on investments from regions like Gulf of Mexico and others. 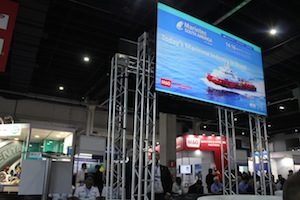 More than 80 companies were present at the 15th Marintec South America expo.

A panel discussion with the speakers wrapped up the seminar. Topics addressed were OPEX vs CAPEX, and the pressure on reducing costs. Streamlining and innovation were highlighted as key elements going forward. The outlook for local shipyards was also addressed, and the decommissioning market as well as repair and maintenance services were highlighted as a solution for some yards.