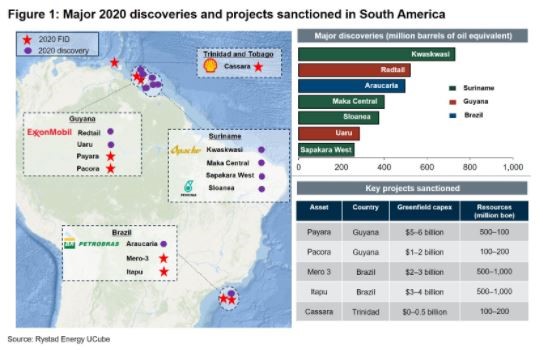 The Latin America region continues to display its importance in the global energy mix.

In a recent newsletter, Rystad Energy informs that South America kept up the momentum from 2019 through last year’s market turbulence and topped the global ranking for exploration success for a second year running.

The region delivered more than 3 billion barrels of oil equivalent discovered in Guyana, Suriname and Brazil during the year. The region also led sanctioning activity in 2020, contributing about 30% of the total sanctioned investments as projects in Brazil and Guyana were greenlighted. Three of the five FPSO projects sanctioned globally were in South America, reinforcing the region’s emergence as an FPSO hub.

Petrobras has come off to a good start to the exploration year with its recently announced Urissane oil discovery in the Campos basin. The ultra-deepwater pre-salt find was the first in Block C-M-411, for which Petrobras and 50% partner ExxonMobil forked out BRL 1.2 billion ($220 million) in signature bonus in 2017. Though yet to be proven commercial, the discovery bodes well for further exploration activity in the area, where Rystad Energy expects several more wells to be drilled in the years ahead.

The Urissane wildcat well 1-BRSA-1377-RJS was the first probe in a cluster of six high-profile exploration blocks awarded in Brazil’s 14th bidding round in 2017 (Figure 1). It was spudded last October by the Seadrill drillship West Tellus in 2,950 meters of water and was drilled to a total depth of 6,635 meters, encountering hydrocarbon in pre-salt reservoirs. Urissane is an elongated four-way closure in the southern part of the block. It is one of the largest of the prospects in the 14th-round blocks, which cover about 5,000 square kilometers and are estimated to hold around 16 billion barrels of gross unrisked oil resources. Petrobras and ExxonMobil swept up six of the 10 blocks on offer with bids totaling BRL 3.6 billion, including a record BRL 2.2 billion for the C-M-346 block and BRL 1.2 billion for the block containing Urissane. All the six blocks are considered to have a significant sub-salt potential.

On March 3, Rystad Energy will host a Brazil webinar called “The future of upstream and FPSO financing” Click here for more information.

Find more information from Rystad Energy on the company website.