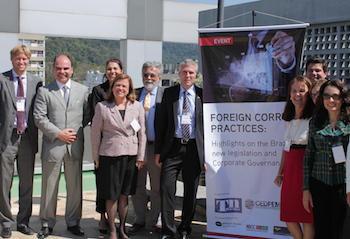 The new Brazilian legislation on corruption was highlighted during a joint event organized by TN Petróleo, NBCC and Swedcham on August 12, 2014.

The event was a joint effort by NBCC, Swedcham, TN Petroleo, Marilda Rosado Advogados and CEDPEM.According to a 2010 study by Fiesp the annual cost of corruption in Brazil is between 1,38% to 2,3% of the country´s GDP. If these numbers are correct, between 32 billion and 53 billion USD were lost to corruption in 2013.

The new law, known as the Clean Company Act, has a wide range of anti-corruption implications for companies operating in Brazil.

Perfect timing, according to NBCC president Halvard Idland. In his introduction to the seminar he revealed that NBCC is in the process of finalizing its own anti-corruption policies.

“This is something we take very seriously and it is important for us that our members are aware of our strong position on this issue”, Mr. Idland said.

New approach
During the first session on the legal aspects of anti-corruption policies in Brazil, Carolina de Azevedo, lawyer at Marilda Rosado Advogados, introduced Law 12.846/13, known as the Anticorruption Law, that came into effect on January 29, 2014.

Carolina de Azevedo and Edmar de Almeida were the main speakers at the event, together with Wanderlei Passarella.“The law defines corruption as engaging in acts against national or foreign public administration, acts that violate national or foreign public assets, and it imposes administrative and civil liability of legal entities, putting them on the spot. There has been a change of approach where focus is on the bribery payer, not on the one that receives bribes, as earlier. Companies, corporations, joint venture partners, foreign affiliates, companies with a representation office on Brazilian territory are all subject to the law”, she said.

The law also has extraterritorial effect, meaning that actions taking place outside Brazil can fall within the law if a Brazilian company is involved. It also imposes strict penalties and fines up to 20 percent of the company´s gross revenue the previous year. This is why the Brazilian law has been described as even harsher than similar remedies abroad.

In her presentation, Carolina de Azevedo explained that a reduction of the penalty is possible if the company effectively cooperates with the investigations. The existence of a compliance policy within the company will also be considered in the grading of the fine.

Mrs. Azevedo sees the principle of decentralized jurisdiction as one of the challenges because it is not yet clear who has the power to enforce the law. Another question is how an existing compliance program would mitigate fines under Brazilian law.

NBCC president Halvard Idland with Helle Moen from Innovation Norway and Johan Linn from GIEK in the front.“Corruption is a problem in Brazil, but we are making progress. Significant advances have been made in supervision and transparency in the oil and gas industry. The creation of ANP was important in the process of improving transparency and supervision practices”, he said.

“Brazil has a serious problem with the governance of these state owned companies. It is actually a political problem. A lack of compliance policies and practices in a context of increasing supervision and control, is contributing to a deterioration of the business environment. The most important impact is on trust, and the lack of trust results in higher costs”, he said.

“The new legislation is a key point. Everybody is going to think twice now”, he said.

The three presentations were followed by a Q&A session. Will the new regulations be taken seriously and when can we expect some real progress, were among the questions asked.

“Corruption is just not good for business, and this is a movement all around the world. 15 years ago bribes were tax deductible in some countries. We are very anxious to make this work, but we need to remind ourselves that this is still very recent”, Carolina de Azevedo said in her closing remarks.

Representatives from the Norwegian and Swedish consulates, Innovation Norway, GIEK and NBCC members like DNB, Sintef, Kincaid and Lufthansa were present at the seminar, entitled “Foreign Corrupt Practices: Highlights on the new Brazilian legislation and corporate governance”.