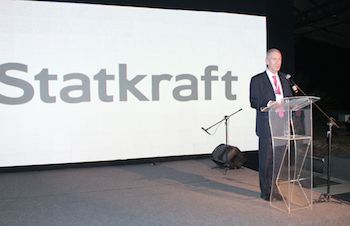 The Norwegian Deputy Minister of Energy and Petroleum, Kjell-Børge Freiberg, Norway´s Consul General in Rio de Janeiro, Sissel Hodne Steen, the chairman of Innovation Norway, Per Otto Dyb and several NBCC board members were among the many distinguished guests present at the celebration. Similar events have also taken place in the Oslo Opera House and in other countries where Statkraft is present earlier this year.

«As an international company of considerable importance as a global player we wanted to celebrate this anniversary properly, invite clients and business partners and use the occasion to promote our company and our brand», Executive Vice President and Head of International Hydropower Asbjørn Grundt explains in this interview.

Statkraft is a leading company in hydropower internationally and Europe’s largest generator of renewable energy. Earlier this year, Statkraft became the majority owner of former Desenvix, now Statkraft Energias Renováveis, which owns and operates hydro and wind power plants in Brazil. According to Asbjørn Grundt, Brazil is a very exciting country for Statkraft. This has to do with the dynamics in the market and the fact that the medium and long-term power demand outlook in Brazil indicated that the expansion of generation capacity is required.

«Going forward, Brazil will surely be one of the most important markets for Statkraft», Mr. Grundt said in an address to the guests at the celebration at MAM on November 18, 2015.

Statkraft’s ambition in Brazil is to combine its local experience in the Brazilian market and Statkraft’s core competence in power generation and market operations. Currently, the company has 12 power plants and 316 MW installed capacity in Brazil, 188 MW hydropower and 128 MW wind power. The annual assured generation is 1480 GWh. The head office and asset management is located in Florianopolis, while the trading & origination office is located in Rio de Janeiro.

Executive Vice President and Head of International Hydropower Asbjørn Grundt.«Statkraft has the experience and the resources, we understand the dynamics of the market and we are always looking for ways to optimize production. After the acquisition of Desenvix, we now have 450 employees in Brazil and at this point we are still working on integrating the experience and the people of Desenvix into the Statkraft organization. It is too early to make big declarations, but even though we take a humble approach to the local organization, Statkraft believes that operations can be optimized here in Brazil as well», Mr. Grundt says.

The combination of hydropower and wind power makes Brazil especially attractive to Statkraft. In Bahia, Statkraft owns a wind park complex located in the municipality of Brotas de Macaúbas. The complex consists of three separate wind parks of 30 MW each. In Aracajú in the state of Sergipe, Statkraft owns the Barra dos Coqueiros Wind Farm.

The fact that there are several Norwegian companies present in Brazil, makes it easier to do business here, Mr. Grundt says.

«Here we find lawyers that speak both Portuguese and Norwegian and other companies with whom we can exchange experiences on topics like safety, anti corruption work and taxes, topics that concern most foreign companies when going abroad.»