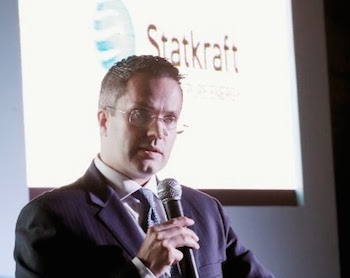 Statkraft is Europe’s largest generator of renewable energy and is the leading power company in Norway. The company owns, produces and develops hydropower, wind power, gas power and district heating. Statkraft is also a major player in European power trading and has 3600 employees in more than 20 countries.

This April, Statkraft assumed control over SN Power in Brazil, and the event was commemorated during a cocktail party at the Museum of Modern Art in downtown Rio de Janeiro. Further expansion in the Brazilian market, is the ambition of Statkraft.

Mr. Joakim Johnsen.“Investing in renewable energy in emerging markets is a priority for the company, and Statkraft sees Brazil as an important platform for further growth in international markets. Considering the increasing energy demand in Brazil and the excellent resources available here, both hydro and wind, Brazil is one of the markets where Statkraft sees a great potential for growth”, says Country Manager Joakim Johnsen.

Since 2008
SN Power has been present in Brazil since 2008, but was established in 2002 as a renewable energy company that invests in emerging markets, with a mission to become a leading hydropower company in emerging markets, contributing to economic growth and sustainable development.

SN Power was owned by Statkraft and Norfund, a Norwegian development financial institution, and as a result of a restructuring of the partnership between these two shareholders, Statkraft now assumes control over SN Power´s activities in Brazil.

In March 2012, SN Power entered into a joint venture with Desenvix Energias Renováveis SA in 2012, assuming control over 40.65 percent of the Desenvix shares. This partnership continues, and Desenvix has more than 15 hydropower, wind power and biomass plants, generating a total of 349 MW.

Statkraft continues its market activities in Brazil, an activity that started in 2011 when SN Power acquired the energy commercialization company Enerpar. With the acquisition of Enerpar, SN Power Brazil secured several long term energy contracts in the Brazilian market.

Statkraft has been an important player in the Nordic energy market since the 1990-s.

“Statkraft has experience in using the markets to reduce risks and optimize energy portfolios. In Brazil, the ambition is to use these experiences and present market solutions to both generators and industrial clients”, says Lukas Gresnigt, Commercial Director of Statkraft Brasil.

Cocktail party at MAM.Joakim Johnsen thinks that Statkraft will benefit greatly from this experience in the Brazilian market.

“Statkraft aspires to benefit from its global experience in the development and operation of hydropower plants. Our objective is to strengthen and increase our presence in the country using our international experience, especially within power generation and commercialization”, Joakim Johnsen says.

– Norway’s largest and the Nordic region’s third largest power producer
– Core business areas within hydropower, wind power, gas power and district heating
– A significant player in the European energy exchanges with cutting-edge expertise in physical and financial energy trading and origination
– 391 power and district heating plants with a total installed capacity more than 17 600 MW
– Total annual power production of 56 TWh, renewable percentage of 97%
– 80% of the installed capacity is in Norway and the Nordic region, 14% in Northwestern Europe and 6% in Southeastern Europe and outside Europe alone, and through SN Power
– Delivers more power to Norwegian industry than ever before. About 21 TWh annually
– Develops hydropower in emerging markets outside Europe through SN Power
– Significant wind power developer. Has completed Sheringham Shoal offshore wind farm off the coast of the UK together with Statoil. (315 MW)
– The Group’s gross sales amounted to NOK 49,6 billion in 2013
– 3500 employees and active in more than 20 countries
– Wholly owned by the Norwegian state

Bahia Wind Farm Complex: The plant is located in municipality of Brotas de Macaúbas in the state of Bahia, which is located in the Northeast region of Brazil. It is the first wind park project to enter into commercial operation in the state,in July 2012

Barra dos Coqueiros Wind Farm: Located outside of Aracajú, Sergipe, the wind farm has an installed capacity of 30 MW. Desenvix holds 88,33 percent of the ownership

Dona Francisca HPP: Has an installed capacity of 125 MW. located on Jacui River in Rio Grande do Sul.

Esmeralda SHP: Has an installed capacity of 22,2 MW and is located on the Bernardo José river in Rio Grande do Sul

Moinho SHP: Has an installed capacity of 13,7 MW and is located on the same river as the Esmeralda SHP. Desenvix holds 100 % ownership and of this Statkraft/SN Power holds 40,65 percent. The project was partly financed through BNDES.

Monjolinjho HPP: Has an installed capacity of 74 MW and is located on the Passo Fundo river in Rio Grande do Sul. Also financed through BNDES.

Passos Maia SHP: Located on the Chapecó river in Santa Catarina and will have an installed capacity of 25 MW. Sn Power holds 22,33 percent of the ownership through Desenvix. Project partly financed through BNDES.

Santa Laura SHP: Has an installed capacity of 15 MW and is located on the Chapecozinho river in Santa Catarina.

Santa Rosa II SHP: Has an installed capacity of 30 MW and is located on the Rio Grande river in Rio de Janeiro. Desenvix holds 100% of the project (SN Power 40.65%), and the investments were R$ 138,963 thousand, of which R$ 88,963 thousand was project financed through Bradesco/BNDES.