Statoil organizes seminar for suppliers for the first time in Brazil.

The Norwegian IOC is preparing to move its business into the next league in Brazil, and a close and open dialogue to suppliers is key in this process. The seminar took place in Flamengo on October 3, 2017, and after the presentations given by Country Manager Anders Opedal and Head of Procurement South America, Mauro Andrade, the participants had to chance to ask their many questions and share their doubts with the Statoil executives.

«We hope to make this seminar into an arena where we can discuss topics of importance, like local content and get input from you, for us all to improve. Statoil is in Brazil for the long run, and I promise we will continue this dialogue», Mr. Opedal said.

Today, Statoil has 1000 registered active vendors and 300 valid contracts with suppliers in Brazil, and a good relation to local suppliers is only about complying with local content regulations. Working with a competent local supplier, is also about reducing risk and reducing downtime in the case of an emergency.

According to Anders Opedal, the Norwegian Continental Shelf will continue being the backbone in the sharpened strategy that Statoil launched earlier this year. But the company also decided to enhance the Brazil portfolio, and Brazil is already a core area.

Big growth ahead
The top executive also presented the Statoil portfolio in Brazil, where the Peregrino development is the cornerstone. 150 billion barrels of oil have been produced so far, but recovery rates remain low, and IOR initiatives like a pilot project on polymer injection is underway. 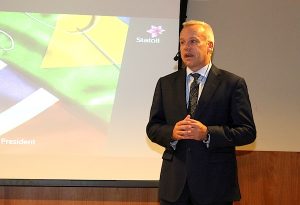 Later this month, new pre-salt bidding rounds are coming up. Statoil is operator on the Carcará field, acquired from Petrobras last year, and on October 27, the northern part of Carcará will be out for bid. Statoil is competing, and depending on the outcome, new developments will start in the years to come.

Mr. Opedal also talked about the BM-C-33, where discoveries have been made. Statoil is currently studying the block to see how to proceed.

«We also have an exciting exploration portfolio in Espirito Santo and in the Santos Basin, and we are ready to drill an exploration well in early 2018 on BM-S-8.»

The «Gas to Grow-initiative» and new opportunities in the gas market with regulatory changes being studied, is also something that excites the Statoil executive, and gas development is an area Mr. Opedal sees big opportunities to leverage the Statoil experience from Norway.

«All in all, I foresee a big growth for Statoil towards 2020. We are moving into the next league, and we cannot do this alone, but have to work together with our partners suppliers and authorities», he says. 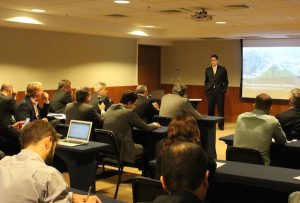 Mauro Andrade is the Head of Procurement South America in Statoil. He presented some of the future needs of the company, some recently submitted to the market. Drilling services on Peregrino Phase 2 and feasibility studies for risers for Bm-C 33 is on the list while hook-up and commissioning for Peregrino Phase 2 and geo hazard studies for BM-C-33 are in the pre qualification phase. Mr. Andrade also explained the procurement process in Statoil to the participants at the seminar.

«The downturn has flattened, but we shall not forget the lessons the recent crisis taught the supplier segment and E&P companies. We need to keep the efficiency that we have gained during the crisis, high. Together with our partners, Statoil is now doing more with less», Mr. Andrade said. He used Peregrino Phase 2 as an example, where Statoil was able to reduce cost by 35 percent.

Mr. Andrade also explained how Statoil has actually sanctioned six project around the world the last 22 months, a significant number in the middle of a market downturn.

His call to local suppliers is not to be shy.

«Propose new solutions to us. We can only deliver if you help us. BM-C-33 and Carcará are among the biggest projects in the international portfolio, and BM-C-33 will be the deepest development in the whole world», Mr. Andrade said.