Statoil is a big fan of Brazil 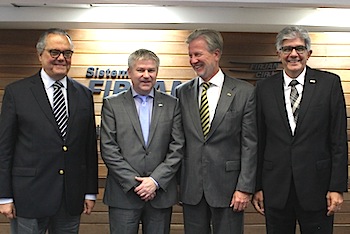 Statoil top executive in Brazil, Pål Eitrheim, talks about opportunities, achievements and lessons learned during presentation at Firjan on December 2, 2016.

The event was organized by NBCC, the German Chamber of Commerce and Industry and Firjan, and about 200 people were present to hear from Pål Eitrheim, who is now leaving Brazil after 3 years as the company´s top executive in Brazil. He returns to the Statoil headquarters to take over as Chief Procurement Officer

In the year that Statoil marks it 15 years anniversary in Brazil, the company is still the second biggest oil producer in the country. Since 2001, Statoil has invested 10 billion USD in Brazil. In 4 years, more than 100 million barrels were produced, and Statoil is now looking into putting a third platform into operation on the Peregrino field in the Campos Basin. And in a few years, production on the recently acquired Carcará field will take Statoil into a new era.

«We are a big Brazil fan, and feel there is a strong fit with between our strategy as a company and the large resource base and access to acreage, as well as the tremendous amount of skill in the Brazilian industry. We see Brazil as an extension of the Norwegian continental shelf where we can also leverage our experience,  Brazil fits us perfectly, and we have established good relations and a strong local operating organization», Mr. Pål Eitrheim (in the photo to the left) explained to the audience.

«Forceful attack»
He also talked about he perfect storm riding the country and how recession, the Lava Jato investigations and the impeachment process has hit the industry hard. «Capturing opportunities in transition times» was the title of his presentation.

«We are seeing the right signals but it is still difficult to make investment decisions based on signals», he said.

Mr. Eitrheim spoke highly of the Lava Jato investigation and called it the most forceful attack on corruption that he has seen in his entire career.

«It is driven from the inside and it will result in a more competitive and transparent Brazilian industry. The Lava Jato investigation is something you can be proud of.»

The Statoil executive also talked about a 2004 corruption scandal within Statoil that forced the CEO to resign.

«As a result we spent time putting a very robust compliance system in place and we are happy to share our experiences.»

The Brazilian oil and gas industry is however still faced with difficult challenges, and Pål Eitrheim discussed the topic of national content in his presentation.

«We see that changes are underway. New bidding rounds are scheduled for 2017 and the law on operatorship on pre salt has been changed. The local content regulations need adjustments. An extension of the Repetro regime is also being discussed and this is for me the number 1 issue to be resolved. We also need a resolution for the unitization blocks. A new framework on natural gas is also important to us.»

Cost reduction efforts
In a separate part of the presentation, he outlined Statoil´s Brazilian portfolio and plans for the different blocks.

«We have a line of sight beyond 2030. Our intent on short term is to reset cost, but on long term we aim for profitable growth. We are not interested in scale just for the sake of scale.»

He called the Peregrino Phase II a strategic bridge to the future where focus is on stable operations of the very heavy oil. Statoil has been able to improve performance significantly. As an example, drilling efficiency is up 48 percent, an achievement that reduces cost up to 60 percent when comparing initial contract value to the invoiced value.

«As a result we have a more robust Peregrino with the break-even close to 45 USD a barrel.»

As for the BM-C-33 called Pão de Açucar, and the BM-S-8, Carcará, Mr. Eitrheim hopes to see synergies as a result of scale. The current focus is on getting a better understanding for the sub-surface of BM-C-33..

«BM-C-33 is a condensate and gas field that diversifies our portfolio, and we are currently more concerned with doing it right than doing it fast», Mr. Eitrheim said.

Statoil is now officially the operator of the pre-salt asset Carcará, and the acquisition from Petrobras earlier this year sent an important signal to the industry that Brazil is still a market with interesting business opportunities.

«The day we announced the Carcará acquisition was probably my best day at work in Brazil, it was a moving moment, because it meant so much to many. Carcará is an asset that is competitive at all times.»

Bold
As for his post 2020 ambition, he is not afraid to be bold.

«Without ambitions you go nowhere and my ambition is to see Statoil as the leading international operator in Brazil. Larger scale will result in synergies, and diversity will reduce risk», he said.

He also talked about the carbon footprint of the portfolio, and guaranteed it is lower than it previously was. Mr. Eitrheim´s advice is to engage proactively in climate issues, as it is a business issue that will affect the whole industry.

In his closing remarks, Mr. Eitrheim said that the Brazilian oil and gas industry has the potential for exceeding Norway.

«The challenge is to get the conditions in place that enables you to compete for investments internationally. We need to make a joint effort», he concluded.

The presentation was followed by a Q&A session and there were plenty of questions for Mr. Eitrheim to answer. Welcoming remarks to the event were given by Eduardo Eugenio Gouvêa Vieira, President of Firjan,  by NBCC VP Rachid Felix and by President of the German Chamber, Gerhard Haase.