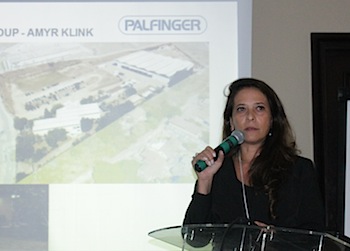 Finding strategies to compete in tough business environments is a major task for companies in the current difficult market.

The difficult situation in the marine and offshore markets affects business players on all levels, and at a seminar organized by Palfinger Marine in Brazil, the challenges that many companies are facing, were comprehensively discussed.

The event included key notes from several well renowned speakers, and took place at the JW Marriott hotel in Copacabana on June 7, 2016.

The Palfinger Marine management opened the seminar with a presentation about the company and about the group, founded in 1932, and today with more than 10.000 employees worldwide.

According to Guilherme Felix, Palfinger Marine Sales Managers Latin America, revenues increased 15,7 percent last year, and the most recent acquisition of Palfinger Marine was Harding Safety in May 2016.

Suzana S. Barros, Area Manager Latin America, made another remarkable announcement – a new partnership with Amyr Klink and the Layer Group – in her presentation to the seminar. Palfinger Marine is looking into manufacturing boats in Brazil in the near future and Layer Group has years of experience in the manufacturing of leisure boats.

«Our strategy has been to focus on services and we have had a 490 percent increase in order intake the last year, a fantastic achievement. Another action we have taken is to focus on other segments and different markets that we can deliver to, like the navy and coast guard in Latin America», Ms. Barros said.

She is confident that enthusiasm and credibility will be retaken in the Brazilian market, and sees several positive trends and developments in the market.

«We will get there, we will overcome the crisis and be considered a booming country again», she said.

Amyr Klink.Sailor and economist Amyr Klink was also among the guest speakers. He welcomed the new partnership with Palfinger and outlined how Layer Group has always focused on simple and reliable solutions. He also talked about his expeditions and adventures around the world and how this was how he got into designing and building boats, using aluminum. Klink has been to Antartica many times.

«We would like to go even further with Palfinger», Mr. Klink said.

«In the midst of chaos there is also opportunity. It seems we are now at a turning point, and Rystad Energy expects a steady increase in the years to come, and new growth from 2017, with investments picking up», he said.

He listed several consequences of the drop in the oil prices: A huge drop in investments, in the level of sanctioning of the development of new fields and new discoveries being far below the long term demands, with projects deferrals all over the world. On the demand side growth is driven by non OECD countries, with India coming and China still representating a considerable share.

Kjetil Solbraekke.«Rystad Energy believes that volatility will continue in 2016, but thinks 50 USD a barrel is too low from 2017 on, due to the disparity in supply and demand. We need higher oil prices for investments in new fields to avoid a supply cliff. We need resources like pre-salt», he said. This is why Rystad Energy expects the oil price to rebound in 2017 onwards, with a steady increase from an average if 47 USD a barrel in 2016.

José Carlos Pedrosa, CEO and founder of Energy Business Partners talked about essential factors to take into account for short term effective strategic planning in a scenario where confidence has declined a lot the last couple of years.

«We have deep political divisions, a shrinking economy and recession set to continue. Improvements in confidence depends on the authorities to implement significant fiscal adjustments, and raising productivity depends on reforms boosting competition. Stronger production is key for  economic growth in a medium term perspective», he said.

Mr. Pedrosa also talked about the future of Petrobras and the divestment program of the company, where the plan is to raise 15,1 billion USD with the sale of assets in 2016. The Statoil block Pão de Açucar BMC-33 could be among these assets.

Petrobras is currently the world most indebted oil company. and challenges for the new CEO Pedro Parente are several:

«The pace of the divestment program is only one of these problems, renegotiation of contracts with equipment and service suppliers is another», Mr. Pedrosa said. He expects the change of government to promote gains in a short terms when it comes to the investor confidence level in Brazil, but said that it all depends on an effective resolution of the political crisis, the impartiality and the coherence of government in handling the Lava Jato investigations.

«These are all major issues impeding putting the country back on the development track», Mr. Pedrosa said.

A Q&A session ended the formal part of the seminar which was followed by a cocktail reception with finger food and live music for all the participants.