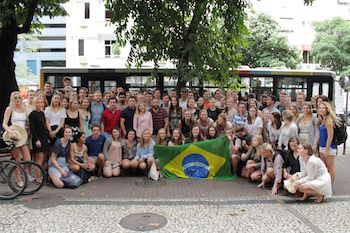 A group of 88 students from the Norwegian university NTNU visited Rio de Janeiro in the end of March. Their goal was to to get a grasp of business, culture and the challenges that the Norwegian business community experience in Brazil.

The students of Industrial Economics and Technology Management at the Norwegian University of Science and Technology spent a week in Rio de Janeiro, and visited Norwegian companies like Statoil, DNV GL, Rolls-Royce and Sintef do Brasil. They also met with Karanba, visited Corcovado and played volleyball on the beach.

«Rio de Janeiro was the first choice of the class, and the great mix of Norwegian companies present here, is what we find particularly interesting, as well as the city itself, of course. We are looking very much forward to visiting a wide range of companies, and samba lessons are also on the agenda», student coordinators Tallak Bergheim and Johannes Kristianslund (in the photo to the left) told the NBCC website.

Norway in Brazil
During a seminar on March 23, 2015, Team Norway was presented to the students. Team Norway consists of the Consulate General, Innovation Norway, NBCC, Intsok, Abran and The Seafood Council, and represents a variety of Norwegian interests in Brazil.

«Brazil is a very important country for Norway, and a lot of things are going on here», Consul Torbjørn Larssen said during his presentation of the Consulate General.

About 150 Norwegian companies are present in Brazil and in 2014, Norwegian suppliers provided goods worth 27 billion NOK to the Brazilian market.

«Promoting Norwegian interests, branding and networking are part of our responsibilities. Norway is the 7ht largest investor in Brazil, and we have been doing trade with Brazil since 1842», Mr. Larssen said.

He also talked about the recent demonstrations and how Brazil as a young democracy is maturing, with a population that is making more demands to the authorities, and even explained the phenomenon «panelaço» to the students.

«Innovation Norway is working to reduce risk for Norwegian companies looking to establish here. Brazil is currently the world´s largest offshore market, they have an advanced airplane industry and an interesting ICT sector. It is a country with a very strong domestic market and an growing middle-class, with vast natural resources and strong institutions. Infrastructure is however poor. The lack of qualified labor, red tape and low productivity are other challenges. But we have a long-term approach and see great potential. The most relevant sectors to Norwegian investors are of course the oil, gas and marine sectors, renewable energy, research, tourism, seafood, ICT and media», Mrs. Moen said in her presentation.

Johnny Håberg talked to the students about the importance of Norwegian bacalhau in Brazil. The very first commodity that was traded by Norway and Brazil, was of course the bacalhau, brought to Brazil by the ship «Nordstjernen» back in 1842.

«Seafood is Norway´s third biggest export article, and we export it to 140 different countries. One third of all Norwegian bacalhau is exported to Brazil, that is bacalhau for more than 1 billion NOK last year», Mr. Håberg said. He also explained how Norwegian salmon exporters are trying to gain market shares in Brazil, and how the Norwegian Seafood Council work to promote their products in Brazilian supermarkets.

Ricardo Cesar FernandesBack on track
During the second session of the Team Norway Day, Ricardo Fernandes presented Abran, the Brazilian wing of the Norwegian Shipowners Association. He talked about opportunities and challenges in the Brazilian offshore sector, outlined the pre-salt discoveries to the students, and explained how the increasingly demanding conditions of the pre-salt blocks will increase the demand for more advanced offshore support vessels.

«Brazil has a fleet of about 500 OSV vessels, and 101 of these are Norwegian-owned. 43 percent of the AHTS vessels operating in Brazilian waters are Norwegian-owned, and there are important Norwegian players in all phases of production. The strategy of Norwegian shipowners is to focus on more advanced vessels», Mr. Fernandes said.

According to Adhemar Freire, the Brazilian oil and gas adviser of Intsok, Brazil is a priority market to Intsok members. Intsok was founded in 1995 to help Norwegian exporters within oil and gas industry to do business abroad, and Intsok has 230 partners today.

«Despite the crisis we still consider Petrobras the largest offshore investor, bigger than Statoil, followed by Pemex and BP. The current crisis and the corruption scandal affect trust, both in Petrobras and in Brazil, but the opportunities remain, and we hope to be back on track next year», Mr. Freire said.

Glorisabel Garrido Thompson-Flôres presented the activities of the NBCC in Rio de Janeiro.

«NBCC was created to foster, promote and increase business between the two countries, hosting different business and networking events. The chamber had only six members when it was founded in 1995. Today we have more than 100 members», she said in her presentation.

Annik Magerholm FetAnnik Magerholm Fet, professor and supervisor for the group of students, says it is the combination of Norwegian business presence and the variety of options for tourism  that makes Brazil so attractive to the students. Groups from NTNU have visited Rio de Janeiro several times before.

«I think a lot of students were surprised by how big Norway is in Brazil. This is a great opportunity for them to learn about the Norwegian presence here and about the activities. It is very instructive to us all», Annik Magerholm Fet, said.

«I actually got a bit carried away during the presentations, and said to myself that I need to learn Portuguese. There are definitely a lot ox exciting opportunities here, career-wise, for instance within aluminum –  or maybe fish. And even when working in Norway, you will have to deal with Brazil some way or  the other, and knowing the Brazilian market will be an advantage. Brazil is more important to Norway than we imagined»,  Tallak Bergheim and Johannes Kristianslund said.