Take off for NBCC committees 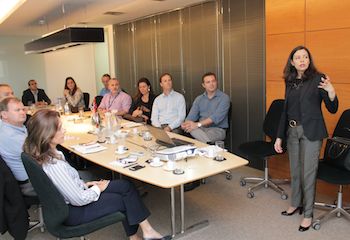 The NBCC working committees have hosted a series of productive meetings and presentations by high level guest speakers this semester.

The NBCC working committees were formed to discuss relevant matters, after an initiative taken back in 2013, and this last year we have definitely witnessed a take off for the activity level.

Several interesting meetings and presentations have taken place and relevant topics debated. The idea is to give the attendees a deeper understanding of the topic on the agenda.

On October 14, 2015, Nordic Light had the opportunity to be present at one of the meetings organized by the Finance Committee, that featured a presentation by guest speaker Marcia Cristina Loureiro, Vice-President Tax of Statoil Brazil. The tax agreement between Norway and Brazil was in focus in this presentation.

Mrs. Loureiro outlined the purpose of international tax treaties, agreements between states to establish a relationship, governed by international law. The first tax agreement in history was signed between Austria and Hungary in 1889. Brazil signed its first tax treaty with Japan in 1967.

«Such treaties can be bilateral or multilateral, and multilateral agreements are becoming more common, as the need for such agreements increase with globalization and technological innovation. The treaty would include embrace problems that it is not possible for one country to solve alone, and the main objective is to avoid double taxation», Mrs. Loureiro explained.

Other important objectives could be avoiding abusive tax planning, non-discrimination, the exchange of information and to secure legal stability, create incentives for investments and procedural framework. Mrs. Loureiro also talked about the convention structures, distributive rules and method for relieving double taxation. In most cases, the benefits will relate only to a resident of one of the contracting states. She outlined the two models known as the OECD model and the UN model and explained that the first emphasizes residence taxation while the last gives more emphasis to source-based taxation.

From the left: Arne Christian Haukeland, Marcia Cristina Loureiro and Lincoln Fernandez.The tax treaty between Norway and Brazil is a bilateral agreement based on the UN model, but with influences from the OECD model. Mrs. Loureiro outlined some articles in the treaty where tax experts have identified what she referred to as «opportunities», that need extra attention from tax lawyers.

«This goes for article 7 on the importation of services, where Brazilian tax authorities have a different understanding then we do. It is a difficult subject, with claims and court rulings going both ways. It also goes for article 2 on taxes covered by the treaty, and the Brazilian tax called CIDE, that was created in 2000, in an attempt from the tax authorities in Brazil to avoid the effects of the tax treaties», Marcia Cristina Loureiro said.

In the Q&A session that followed Mrs. Loureiro´s presentation, committee members signaled that tax is a heavy burden to the companies, and that the companies are more than willing to contribute by paying taxes, but that the Brazilian authorities sometimes are creating unnecessary difficulties, and that a lot of time is lost in court disputes over taxes.

According to Arne Christian Haukeland of DNB, the coordinator of the Finance Committee, all the meetings have been well attended.

«Topics have varied thus attracted different people from the companies. By this we have achieved something important which is to create engagement for the committee and NBCC also beyond those who usually attend the bigger NBCC events. We have had several legal/economic topics on the agenda, from discussions on the Repetro regime, to the Norwegian-Brazilian tax treaty and how the companies can benefit from that», Mr. Haukeland says.

On November 11, 2015, new ANP resolutions were discussed by the new NBCC Regulatory Committee. Coaracy da Silva from CDS Consultoria Naval e Offshore is the coordinator of this committee.

Flavio Diniz and Mariana Bardi from DNV GL outlined the ANP resolution 43/2007 on SGSO implementation, as ANP is in the process of preparing new and strict regulatory framework on well and drilling integrity and subsea systems integrity, including pipelines. Robertha Marques, also from DNV GL, presented the ANP resolution 19/2013 on Local Content. Until 1999 there were no requirements of this kind. Today, they are considered a challenge to the industry.

The Legal Committee and its members have discussed compliance, split of contracts: charter versus services and judicial recovery in meetings  this last semester. Union relations was the topic for a meeting in the NBCC Human Relations committee on November 26, 2015. The current market environment and how the collective labor agreements impact salary adjustments was discussed. How HR is responding during the crisis has also been subject to discussions in the committee. Michelle Araújo, HR manager at DNV GL is the coordinator of the HR Committee, and Andre Carvalho of Veirano Advogados the coordinator of the Legal Committee.

According to Arne Christian Haukeland, the meetings and presentations have fostered good discussions, and resulted in the sharing of experiences and knowledge between the members.

«One of the things we should continue to work on, is how to follow up on some of the topics brought up», Mr. Haukeland says.