Taking a break for carnival 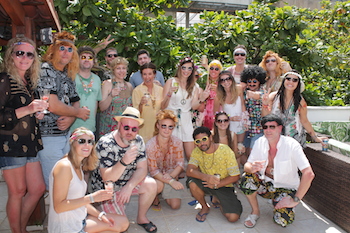 King Momo with the key to the city, accompanied by mayor Eduardo Paes, governor Luis Fernando Pezao and others.

“During carnival, there is no crisis”, King Momo, Wilson Dias da Costa Neto, said when he received the key to the city from Rio mayor Eduardo Paes, on Friday 13, 2015. The ceremony formally opened the 2015 Rio Carnaval, and the royal declaration is something Siv Iren Klepp and Sverre Grimstad believe in. On February 14, they invited friends and colleagues to an informal breakfast with champagne, as a warm-up to the many blocos in Rio this Saturday.

“This is the highlight of the carnival to us. During carnival you can have fun and forget about your problems. The whole city seems to be enjoying, and Brazilians are fantastic, happy and outgoing. They know how to enjoy life, and this Brazilian way is also having a positive influence on us”, the couple says.

For the third year in a row, they host the breakfast event in their Leblon home. This year, the guests were asked to come as hippies.

Siv Iren Klepp attending to her guests.“We gather about 20-30 friends, have a Norwegian-Brazilian breakfast and a few drinks before we go to one of the blocos in the neighbourhood”, Siv Iren Klepp says. She is one of the authors of the blog Rio for You, and has also completed her bachelor degree on business culture and cultural changes. Sverre Grimstad works for Emerson.

Expats belonging to companies like Aker Solutions, Statoil, Haliburton and Ifra Eior were also on the guest list for the carnival breakfast on February 14, 2015.

Ifra Eior is a Stavanger based company founded in 2011, and quite new in Brazil. Ifra’s goal is to support oil companies with the challenging task to increase oil recovery.

Big business
Carnival, however, goes way back, and in Rio de Janeiro, carnival is a big industry, that creates jobs and income to 250.000 people. Firjan estimates show that the 1.3 million tourists coming to Rio will spend 1.2 billion reais during this year´s carnival .

“If something represents the soul of Rio de Janeiro and the way of the people of this city, it is the carnival. Nothing is more typical, more carioca than carnival”, mayor Eduardo Paes said during the key ceremony on February 13, 2015.

Nothing better than champagne for breakfast!According to numbers from the Brazilian Ministry of Tourism, the event will generate 6.6 billion reais all over the country.

These are positive numbers to a struggling Brazilian economy, and many might feel they need a timeout from the current challenging business scenario in Brazil.

Share photos
The director of the Norwegian Seafood Council in Brazil, Mr. Johnny Håberg, his wife, owner of Portuguese language school Português Carioca, Marcia Håberg and a group of Norwegian and Brazilian friends – from a variety of companies – like Statoil, Kongsberg, Innovation Norway, Teekay, Klaveness and the Norwegian Consulate (photo below) watched the Saturday parades at Sapucai from the VIP Lounge “Gente Fina”. A total of 20 Norwegians were present, according to Mrs. Håberg.

Several Norwegians were also participating in the parades at the sambódromo this year.

And what about you? Email your best carnival photos to us (use the email below) to share them with the readers of the NBCC website!