Teaming up to tackle the future 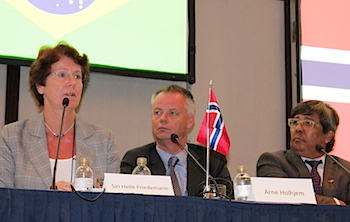 The second seminar on collaboration between Norway and Brazil within research, development and innovation (RD&I) in the oil and gas industry took place on November 3-4, 2014. The November Conference attracted 160 participants, and how to increase value creation by collaborating was on the agenda for the two day conference, which is a follow up of a similar seminar last year.

In 2013, a Memorandum of Understanding, called BN21, was signed between the Norwegian Ministry of Petroleum and Energy and the Brazilian Ministry of Research, Technology and Innovation. How the BN21 agreement can contribute to value creation was also debated in several panels on November 3, 2014.

From the left: Siri Helle Friedemann, Arne Holhjem and Elias Ramos.Arne Holhjem, director of the Norwegian Petroleum Directorate, outlined the activity level at the Norwegian continental shelf before listing a series of challenges that in the view of NPD deserves attention.

“There are nearly 80 fields in production on the Norwegian continental shelf, and we have more than 40 years of history. We have produced 44 percent of the resources we think are there, so we are not even half the way. Increasing recovery (IOR/EOR) has always been a priority, and we have a 69 percent higher recovery than what was planned, on average. Several technological breakthroughs have been made. The introduction of 3D seismic was very important, as was horizontal drilling and the use of multi laterals, multiphase technology and seabed compression, which is now being implemented on the Asgard field as the first in the world.”

He also presented the Troll field, where new technology and the use of horizontal wells resulted in a significant value creation on what turned out to be Norway´s 5th largest oil field.

“In the future, we need technology to solve another set of challenges”, Mr. Holhjem said, and listed installations in harsher waters, the subsea factory, well and drill technology, geological and geophysical methods, reservoir and production as the main challenges.

Unlocking the value in mature fields is a common focus to both Norway and Brazil.

“Production systems on the pre-salt fields have the same characteristics as on post-salt fields. On mature fields in the Campos Basin production is decreasing, and it is important to develop new technology to increase recovery here. Brazil is about to become a major player and a major oil producer globally, but we want to be as important in the development of new technology and need to strengthen the systems and environments for innovation”, Mr. Ramos said.

We already see more cooperation on both academic and industrial level. ANP has accredited more than 400 laboratories and 80 universities and research institutions to attend the interests and needs of the industry. Siri Helle Friedemann, director of the Research Council of Norway, presented a list of projects with Norwegian funding in her presentation to the conference.

“Bilateral cooperation is very important for small research community like Norway and petroleum is a priority. Brazil is also among the countries we give priority”, she said. The DEMO 2000 program has co-funded projects with Brazilian support, and several projects with UFRJ, PUC, Unicamp, USP and others started this year, with funding from the Petromaks 2 program

From the left: Eduardo Santos, Petrobras, and Fabiano Lobato, Statoil.Overlapping priorities
Statoil and Petrobras were also invited to share their views. Petrobras is among the international oil companies that spend most on research, 1,132 billion USD in 2013, and the company has several technological partnerships with Norwegian  partners.

Cenpes-manager Eduardo Santos presented the Cenpes organization and outlined the focal points in the Cenpes strategy, many of which are overlapping with the priorities mentioned by other speakers.

Fabiano Lobato, head of the Statoil Research Centre Rio, stated that IOR is a main focus to Statoil.

“We believe that technology is increasingly important for the unlocking of access, value creation and growth. BN21 is a great example of how Brazil and Norway can develop the future together. Our focus areas are carbonate reservoirs, IOR, subsea technology, CO2 management and CCS, envisioning the pre-salt challenges. We see a lot of space for collaboration”, Mr. Lobato said

“Productivity a problem”
In a separate panel on Day 1, CNI and Finep representatives discussed what is needed to increase the value creation and competitiveness of the Brazilian industry.

Joao Emilio Gonçalves, executive director of CNI, called for an overall political strategy for the industry, to avoid contradictory policies, and said that the partnership with Norway is a great opportunity to learn from someone that are ahead of Brazil in history.

Representatives from Norwegian and Brazilian research institutions were also invited to say a few words on their expectations and commitments on collaboration between the two countries. The first day ended with a panel debate where the participants discussed the common challenges Norway and Brazil are facing, and how collaboration can increase innovation and technological local content.

On November 4, Arild Nystad and Paulo Beirão presented a case on the development of a telemedicine decision support system for the oil and gas sector.

The signing of two Memorandums of Understanding between Innovation Norway, Finep and the Research Council of Norway also took place on November 4, 2014. Read more about the signing here.