The art of enduring pain 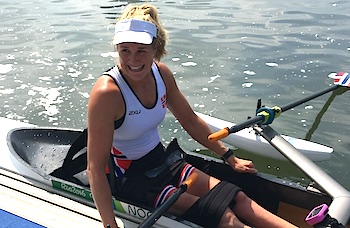 The Norwegian rower Birgit Skarstein is an inspiration to many – and says she feels inspired in Rio de Janeiro.

«Right now my whole body hurts, but I did my best, and I feel privileged to be a part of this. I just love being here in Rio. The rowing arena at Lagoa is wonderful, powerful in a way. At the starting line, you have Christ the Redeemer watching over you. There are so many noises, of traffic, of children, and so much warmth, from the sun but also from the people. It is also an inspiration for me to live among the other athletes, people who have struggled so hard to get here. There is so much we all can learn from sports», she says.

A miniature world
In 2008, during a trip to Thailand, Birgit Skarstein broke her ankle when she jumped into the ocean. After four surgeries in Asia, she was transported back to Norway, where she underwent several other surgeries.

During one of these procedures, she was given an anesthetic that never passed, and the active 20 year old received the devastating news that she would never walk again.

The way Birgit dealt with her being paralyzed from the waist down, could serve as a life lesson for all of us.

She is a living example of determination, of strength and resilience every single day. With a firm handshake and always with a smile on her face.

«The Paralympic Village is like a miniature world. There are flags from all over the planet. The IOC actually has more members than the United Nations. The sense of community is very strong. We are all part of something much bigger. We live together and we eat together. It’s like an ideal world, a warm and inclusive community. Imagine something similar outside the Paralympic Village, out in the real world.»

Hard work
In Norway, Birgit Skarstein is known for her active participation in the social debate. She is a member of the city council in Oslo, the capital of Norway, and used to be the director of an organization for disabled young people. She is an inspiration to many, not only because of the way she has overcome serious difficulties, but also because of the attitudes and beliefs that she defends.

«I find it great if my story can inspire others to follow their dreams. We cannot let strangers define what we can or can not do. It is very easy for someone to tell you that it is not possible. Don´t let this stop you», says Birgit.

In 2014 she won the world championship in her class, ASW single scull. In 2015, she won a bronze medal despite having two broken ribs. The ability to endure pain is one of her main strengths, she says.

Birgit spends 18-30 hours training every week, and with her impressing track record, it is hard to believe that she started rowing only four years ago, in 2012.

«When I first started out, a lot was expected of me, despite my handicap. I love being out there on the water, and I was fascinated by the combination of physical strength, the mental and technical challenges that rowing features. It is hard, but you could say that I did not choose rowing, it was rowing that chose me.»

In the London Paralympics, Skarstein was among the spectators. Today she is an eager ambassador of para-sports.

«In London I realized how dedicated these athletes are and how hard they work. It is important that the world knows how serious this is to us para-athletes. It actually says a lot about how far you can get in life if you only work hard enough and believe in what you do», Birgit Skarstein says.