The future is subsea 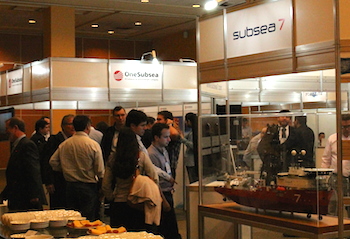 The second edition of Subsea Forum Rio took place in Rio de Janeiro in the end of May.

Subsea Forum Rio 2014.The forum is an biannual event organized by IPB end SPE-Brazil Section, and this year the event recorded a presence of more than 300 professionals of the subsea area. Representatives from 9 countries and 11 operators were present at the forum, held at a hotel in Barra da Tijuca. Six universities were also represented.

Subsea Forum Rio was organized after an initiative taken by Petrobras two years ago, as subsea technology is a priority to the company. The Underwater Technology Conference in Bergen, Norway is used as a blueprint for the Rio event. UTC in Bergen has about 700-800 participants and is considered an important meeting place for the oil companies and their suppliers.

Petrobras has more than 1000 subsea wells, and considers development of subsea solutions as important tools for development of all the new discoveries in Brazil  in new and challenging scenarios, solutions that might enable the mitigating of potential problems that these challenges pose.

A priority
Statoil believes that subsea facilities on the seabed will be vital for success in areas such as the Gulf of Mexico, the Arctic and Brazil. Subsea compression technology is currently being installed for the first time ever on two fields in the North Sea. Statoil has worked on the Åsgard Subsea Compression station for more than ten years, and this is some of the most advanced equipment ever installed on the seabed, according to Ole Økland, Leading Advisor Subsea Processing in Statoil. He is also on the Steering Committee of the Forum. About half of the Statoil production comes from subsea wells, and developing and applying subsea technology is one of the cornerstones in the Statoil Corporate Technology Strategy

Mr. Ole Økland. Photo courtesy of OTC Brasil 2013.“Subsea is a priority to Statoil, and we consider it a business critical technology, because we believe it will contribute to increasing recovery and accelerate production. Without subsea technology it would not have been possible to develop and produce oil on the enormous Brazilian pre-salt fields like Lula and Libra. The same goes for Angola, Gulf of Mexico and the Flamish Basin in Canada. In Norway subsea technology was vital in deeper waters where conventional, fixed installations could not do the job”, he says. Subsea-tieback to existing platforms or floaters also make very good economical sense for smaller reservoirs, according to Økland.

During OTC Brasil last year, Mr. Økland gave a presentation on Statoil subsea factory ambition and described the Tyrihans field, where sea water injection pumps were installed in 2009, and increased the total recovery by 10 percent. Next year will be exiting for Statoil. For the first time subsea compressors will be in operation at Åsgard and Gullfaks fields, and Statoil have calculated that this will increase the recovery rates with 280 million BOE for Åsgard and 22 million BOE for Gullfaks.

“Statoil believes we can earn more money by creating a subsea factory on the seabed. The benefits are even more significant on deeper water, like in Brazil, and in harsher environments, like Canada and the north of Norway. We need to work together to find cost-efficient solutions”, Mr. Økland says.

From the left. Ricardo Serafim and Fabio Távora.Avant-garde

“To Aker Solutions it is very important to show our solutions and the projects we are developing locally and globally and to interface with customers in order to better understand their current and future challenges”, says Fabio Távora.

“This is the second edition of this forum and it demonstrates how Brazil is leading the way in the field of subsea technology, when it comes to investments in new technologies and solutions. The oil companies consider Brazil as an important option for investments.  Subsea solutions enable us to cross new frontiers, start production in areas where it was not possible in the past, and add value to the oil & gas industry “, Ricardo Serafim explains.

The ambition of Orlando Ribeiro, chairman of the Subsea Forum, representing Petrobras, is that the event may provide a better understanding of critical issues to the industry, and also help the industry find the paths to maintain a good safety record and improve performances.

Important NBCC members like Subsea7 and Aker Solutions were sponsoring the event, and several others were among the speakers during the forum. Sonja Helene Hauge and Jonah Margulis from Aker Solutions talked about the operational experiences made on the Tyrihans field. Bjørn Søgård from DNV talked about life extension of subsea assets and Magnus Bernt from Statoil told the forum about subsea compression and presented a case study from there Asgard and Gullfaks fields.