The gas story to be rewritten 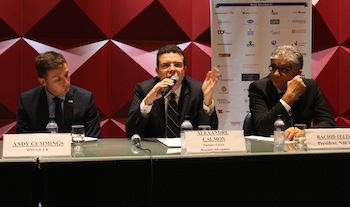 From the left; Andy Cummings, Alexandre Calmon and Rachid Felix.

There is a broad consensus that natural gas represents a tremendous business potential in Brazil. The question is how to proceed to realize this potential?

«A new reality for the gas value chain in Brazil» was the name given to a seminar organized by NBCC on May 23, 2017. As the demand for energy grows, gas is expected to play a key role in the future energy matrix, but in Brazil, the development of the gas value chain is still in its early beginning.

«We are currently in a transformation phase», Managing Director of the Oil and Gas department South America at DNV GL, Mr. Alex Imperial said in his keynote to the seminar.

«In the Brazilian context, the opportunities lie in the entrance of new players. Many players are looking to expand their business and we need more diversity, more infrastructure and new technology. Technology is a key to future business model», Mr. Imperial said.

Divestments
Secretary General of IBP, Mr. Milton Costa, talked about the gas landscape in Brazil and presented a timeline from the very beginning in 1988 when Petrobras starter the GASPAL operation. In 2009 the new Gas Act was passed in Congress. In July 2011, the first pre-salt gas was produced by Petrobras on the Lula field.

«Petrobras has later sold part of its gas division, as part of its divestment plan, and this is why we are currently facing a transition of the sector», Mr. Costa explained.

He also outlined the existing infrastructure in Brazil for processing and transport of natural gas, and called the infrastructure far below the needs of the country this size.

«Petrobras was in a monopolistic situation, but is now looking to sell. This provides a new business environment and an opening for new players, for investors. But it also leaves us with a big challenge for regulators and for the market», Mr. Costa said.

Alexandre Calmon, Lawyer and Partner at Vieira Rezende Advogados, outlined the current legal challenges to gas development in Brazil to the seminar. He also presented numbers proving the dominating position of Petrobras in the sector: In 2015, Petrobras produced 81 percent of the gas in Brazil.

«Petrobras is everywhere, in production, in transportation and in storing, and Petrobras also owns the facilities needed to attract new players. Now a divestment process is ongoing and this brings us to the current situation. And what are the considerations and main work fronts we need to focus on?» Mr. Calmon asked.

How to make sure that other players will have access to essential facilities is one important consideration. In Mr. Calmon´s view, a harmonization of regulations on state and federal level is also needed as well as developing an independent, integrated management of the transportation and storage installation systems.

«We are at a crossroads and need to continue discussing the transition from a monopoly to a competitive system», Mr. Calmon said.

Storage
The seminar was divided in several sessions. Edson Real, business development manager at Golar Power Latam presented the UTE Porto de Sergipe, a power plant with an LNG terminal under construction outside of Aracaju. The total investment is of 5 billion reais, and the plant will supply power to 26 power distribution companies around the country. The FSRU Golar Nanook has a storage capacity of 170.000 cubic metres of LNG, and will be delivered in December 2017, and operations will start in 2020.

Business development manager Jean-Marie Gauthey at Engie Brazil talked about underground gas storage in his presentation. Engie is the number 1 storage operator in Europe, with 21 sites in the UK, in France and Germany. Flexibility in storing solutions makes it possible to balance demand and supply, and Brazil has a very high need of flexibility, due to the volatility in the power production from hydropower, Mr. Gauthey argued. When hydropower production is low, gas could serve as a backup, but in Brazil, flexibility is currenty low, and underground gas storage facilites do not exist. This is however something the industry needs to consider carefully for the future development of the sector.

A global perspective on the gas value chain was provided by Mr. Andy Cummings from DNV GL UK. He talked about gas master planning, and how the development of such a plan will enable a jurisdiction to optimize gas field development and the development of infrastructure as well as a regulatory framework for supporting long term gas sector development. He also presented current trends in regulations around the world, which includes harmonization across international boundaries.

No way back
The presentations were followed by a panel debate. Jaime Lima of DNV GL was the moderator of the debate. Risks present in the transition phase and the need for a gradual transition with clear and consistent rules, for coherence and the need for working together with other suppliers of energy, like renewables, were some of the topics discussed by the panel.

«The pace will be set by the government in the transition, but there is no turning back, this is the future and cheap energy is a key issue for the development of the country», Milton Costa of IBP commented.

There is no doubt that natural gas is going to be part of the energy mix for the next decades, the panel concluded.

The closing remarks to the event were given by NBCC president Rachid Felix: «Gas represents huge business opportunities, but also a lot of challenges, both technological, legal and regulatory issues. It´s up to the industry to find competitive solutions to these challenges.»

The seminar was sponsored by DNV GL and Vieira Rezende Advogados, and took place in Botafogo, Rio de Janeiro.