The long road to recovery 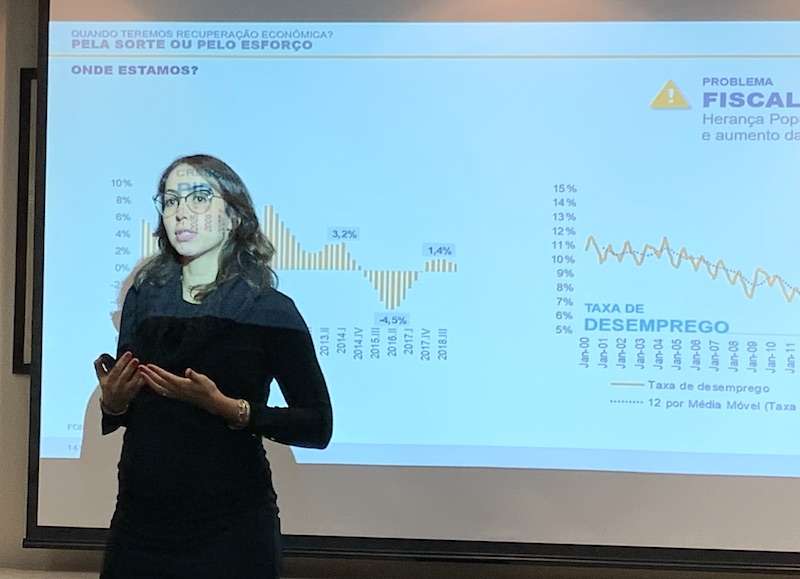 According to figures that Fernanda Consorte presented, Banco Ourinvest expects a growth in GDP of only 0,82 percent this year. But in 2021 and 2022, the expected growth is 2,5 percent.

When can we expect to see the Brazilian economy recovering? And does recovery depend more on domestic measures – or on the global economic scenario?

During an event in the offices of Banco Ourinvest on Avenida Paulista in São Paulo on August 14, 2019, three invited speakers tried to answer the question that everyone is asking these days: When will the recovery of the Brazilian economy start? 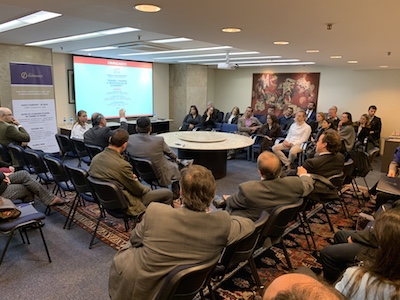 The event turned into a dynamic session where participants had a lot of questions for all of the three speakers.

The speakers were Chief Currency Strategist Fernanda Consorte from Banco Ourinvest, Renato Pacheco, representing Eurocâmaras, and Francisco Rodrigues, CFO of Gunnebo Industries, who presented his view as an executive in a Nordic company operating in Brazil.

Luck or force
In her keynote, Ms. Consorte outlined two scenarios to the audience. According to the Senior Ourinvest Economist, both Brazilian authorities as well as the global economic scenario will have an impact on the recovery we are waiting – and longing – for.

She called the two different scenarios that she presented «recovery by luck» and «recovery by force», and set the stage by explaining what caused the recession that Brazil is currently suffering under.

«The main problem of our economy today is neither inflation nor external debt. It is the huge fiscal deficit caused by the populistic government of the Brazilian Worker´s Party (PT). The PT government only had eyes on the less fortunate part of the population and they spent more than they had on social programs. The result was a huge fiscal deficit. Social programs are important, but the government spent way beyond the revenues, and with no other return than a slight increase in consumption. They forgot to invest in infrastructure, in roads, ports, railways, in education, and they did not invest in productivity measures. This is how PT caused recession and high unemployment in Brazil.» 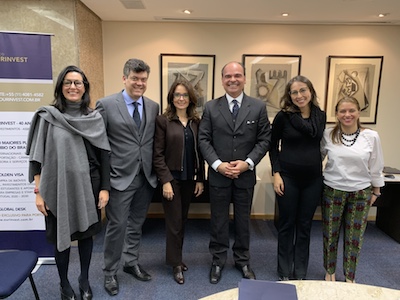 As a result, Brazil is currently ranked number 109 of 190 on the World Bank Doing business Ranking. Ms. Consorte then moved on to describing the international scenario, where the trade war between USA and China is weighing down. A volatile global market is responding to Donald Trump moody tweets.

«Global recession is a risk and Brazil is suffering the consequences. The Chinese economy is already decelerating.»

The domestic fiscal deficit and the risk of global recession has resulted in a lower confidence in emergent economies like Brazil, and economic stagnation is the result.

«Investor confidence is a key indicator that will tell us when recovery will start. We are at a low level right now, but I see two ways out: The recovery by luck scenario could become reality if USA and China reach some kind of deal. China is a big importer of Brazilian commodities, and if a new commodities boom would start, investors would certainly look to Brazil with greater interest.»

The other scenario requires authorities and market players to join forces and push important reforms forward.

«This includes the pension reform and the tax reform. Privatizations and concessions need to speed up, and infrastructure is a key word. We also need Congress and the current administration to work closely together. This requires great dedication, it requires force, union and dialogue between the branches of government. The result would be a virtuous cycle that would benefit the economy. The risk that the international scenario represent, is however still present, but Brazil could represent a success story in a global recession scenario, a market that investors would look to place their money.» 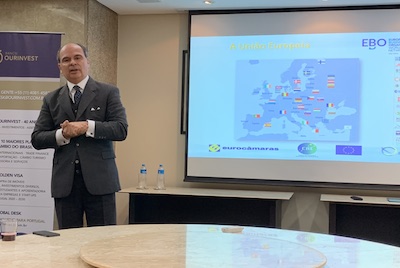 EU-Mercosul treaty
Renato Pacheco Neto (in the photo to the left) presented numbers that demonstrate how important the new trade deal between EU and Mercosul is to the Brazilian economy.

«Together, EU and Mercosul represent 25 percent of the world economy, and EU was the biggest investor in Brazil until 2018. The new treaty can bring investors back», he said in his presentation

Mr. Pacheco Neto also outlined the main points of the deal and the main advantages from a Brazilian point of view. The elimination of export toll barriers is only one example.

The treaty has not been ratified yet, and there are still obstacles ahead that could create difficulties, like a new leftist government taking office in Argentina, and the total lack of priority given to sustainability issues by Brazilian president Jair Bolsonaro in his encounters with European counterparts. 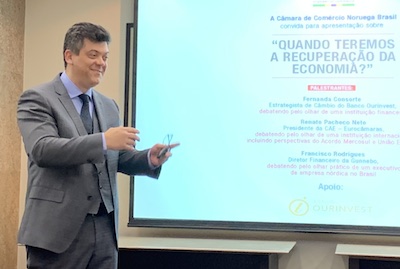 Francisco Rodrigues (in the photo to the left) of Nordic firm Gunnebo Industries in Brazil listed several reasons for optimism in the current economic scenario, and said that companies have to prepare for a new era, by making clever investments, learning new tools and restructuring for the future.

«We have to be ready to catch the wave when it comes, and in the meantime, we need to find a balance between cost efficiency to keep our heads above water and making necessary investments  that will prepare us for the future, while always «selling» the Brazilian business potential to our international investors. Brazil is different, but we know the rules to play by», Mr. Rodrigues said.

Investments in infrastructure, fiscal discipline, private players taking a bigger part – as well as a modern regulatory policy, predictability and stability – are fundamental factors going forward, according to the Gunnebo Industries executive.