The next big growth nation 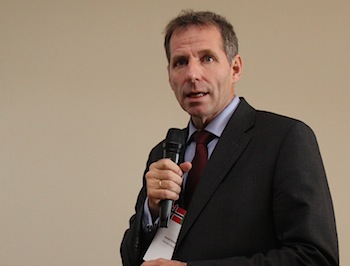 «Brazil could be the next big growth nation, and is the only country which really has huge undeveloped fields to work on», says Jarand Rystad during ROG business event.

The breakfast seminar gathered more than 80 people and took place at the Windsor Atlántica hotel in Copacabana on October 27, 2016. The event was organized by Innovation Noway, The Consulate General, Intsok and GCE Subsea, in cooperation with Rystad Energy.

Norway´s Deputy Minister of Petroleum and Energy, Ingvil Smines Tybring-Gjedde, who was in Rio for the Rio Oil & Gas Expo and Conference, gave the opening speech at the seminar, and she focused on the importance of technology to meet challenges.

«The oil industry has recovered from crisis before, yet this should not be an excuse for doing nothing. Cost must go down and efficiency must go up. We have high recovery rates on the Norwegian Continental Shelf compared to a world average, and this is about technology. Water injection has for instance become common practice. This was not always the case. The active involvement by the government has been a key factor and going forward, Norwegian authorities must contribute by offering stable framework and also new acreage. Norwegian technology is world leading in this industry and this is a position we myst retain, by giving priority to research. Cooperation has always been our way to gain cutting edge technology and we are happy to see that the R&D cooperation with Brazil is progressing well. Norway and Brazil are both early-birds on CCS, something that will enable the oil and gas industry to remain a key part of a greener energy future. I am impressed by what Brazil has accomplished over the years in the energy and offshore sector. You are a leading laboratory constantly breaking new barriers, and in an demanding offshore environment, technology is vital to meet challenges», Mrs. Smines Tybring-Gjedde said.

The future is subsea
Jarand Rystad, the CEO of Rystad Energy presented an interesting outlook to the seminar in his keynote. Hopes are high for market recovery after the current downturn.

«Brazil could be the next big growth nation, and has a much bigger potential than Norway. Brazil is the only country which really has huge undeveloped fields to work on, and could double the Norwegian production», he said.

But this depends on politics, on framework and on the limitations that future carbon policies will likely impose on the market.

«Brazil needs to start now, and is able to deliver going forward. A Brazilian pre-salt well is 100 times more productive than a shale well, but there are risks her, and if no measures are taken, cost could increase as much as 50 percent after tax in Brazil», Mr. Rystad says.

«These are the big challenges for the Brazilian industry going forward and are all creating uncertainties that will hold back investments. But we have seen good development in recent months and you can actually realize the potential and will be backed by the global market, accompanied by comeback in competitiveness of offshore oil as compared to shale», he said

The subsea market is forecasted to grow towards USD 14 billion by 2025, meaning potentially doubling for the current level. This is important for Norwegian suppliers, and we expect a steady increase ahead.»

Mr. Rystad started his presentation by offering the Rystad view on the future of the oil price. Rystad Energy foresaw the collapse in June 2014.

«After two years, the market has rebalanced, and we are now seeing a declining global production. We are at a turning point, but the current price is too low to generate any growth in production ahead. For shale, cost has already hit the bottom as opposed to offshore, meaning that break even for offshore will fall event further», he said.

«We have a lot to learn from Norway, especially when it comes to mature fields operation, and our partners experience may increase the assets value in the Campos Basin. Pre-salt is important but 62 percent of our production still takes place in this basin. We are in a process of seeking extension of several fields, and invite you to be our partners in this process», Mr. Mendes said.

Leonardo Moura talked about the experiences of his company in the Brazilian market. Aker Solutions has been present in Brazil since 1978 and was actually part of the team that designed the Rio-Niteroi bridge in the 1970-s.

From the left: Marcos Vinicius Rodrigues of DNV GL, Trond Olsen of ClampOn and Stein-Gunnar Bondevik of Innovation Norway.

In 2009, Aker Solutions brake the first supplier to pre-salt when it was awarded the Tupi pilot project. Recently, Aker Solutions inaugurated a subsea high tech senter in Paraná, with the capacity to manufacture six Christmas trees a month.

Currently, the company has a 25 percent market share with 229 installed Christmas trees.

In the last part of the seminar, the companies ClampOn and DNV GL were given the opportunity to present their product, a vibration monitoring system.

«Vibration is an issue and vibration monitoring will become a requirement, due to safety regulations Vibration can induce fatigue and breakage on equipment and cause serious incidents», Trond Olsen from ClampOn said.

He believes that vibration will become an issue on production systems on pre-salt wells, valuable assets producing 25.000 barrels a day with quite simple Christmas trees, and would like to work with operators and service providers in Brazil.

Closing remarks were given by Gunnar Buvik, Business Development Manager at GCE Subsea.