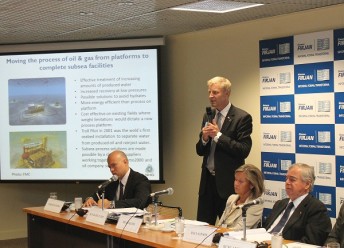 Norway has succeeded in developing a competitive and highly qualified oil & gas industry. Some of the challenges Norway was facing a few years back, are similar to what Brazil is up against today. How Norway dealt with these challenges and the lessons learned along the way, are topics of great interest to Brazil. But what works perfectly in a country like Norway, won’t necessarily fit the Brazilian reality.

On June 25, Firjan, CNI and The Confederation of Norwegian Enterprise, NHO, organized a lunch seminar to discuss the experiences, challenges and lessons learned in developing a competitive Norwegian oil and gas industry.

The Brazilian local content regime and how Norway succeeded in developing its local industry, was on top of the agenda during the seminar. Today Norwegian suppliers and service providers in the oil and gas industry make 40 percent of their money abroad, that is 152 billion NOK in 2011, and international sales are still growing. The industry employs 120.000 people directly, and represents 25 percent of Norway´s GDP and 52 percent of exports.

They must indeed have done something right.

Runar Rugtvedt, director for the oil and gas technology suppliers in the Federation of Norwegian Industry, gave a short history lesson to the audience at the seminar, and tried to explain how a small country like Norway gained such a strong position in the global oil and gas industry.

Oil exploration on the Norwegian continental shelf started in 1963, and six years later, the first discovery was made on Ekofisk, by Phillips Petroleum. Production started in 1971. In Norway, the government chose a concession regime, where the authorities decide who is awarded the operating licenses on the blocks. In the first round in 1965, 278 blocks were made available.

3 Norwegian oil companies were established to ensure a competitive industry. Statoil was founded in 1972 under parliamentary control, Saga Petroleum was founded as a private company and Hydro, the Norwegian industrial giant, also decided to engage in oil exploration. In 1999, Hydro acquired Saga Petroleum. In 2003, Statoil was privatized, and in 2007, Statoil acquired Hydro Oil & Gas.

Statoil has always had a dominant position in the Norwegian oil and gas industry, and currently, Statoil is behind 80 percent of the activities on the Norwegian continental shelf.

New opportunities for the yards

It was however the Americans that initiated the exploration of the Norwegian continental shelf, and in 1966, the drilling rig Ocean Traveler was damaged during transit to Norway, and needed repair at the Rosenberg yard in Stavanger.

In the 1960-s, Norway had the largest commercial fleet in the world, and a number of yards along the coast, with the capacity to enter into this new market, an opportunity they decided to make the best of.

“This was the first time a Norwegian yard was engaged. Later on, in 1972, Aker developed their own semi-submersible rig design, called H3, and in 1974, Aker had 25 orders on this specific rig. Today, Norwegian companies have a substantial share of the global offshore activities”, Mr. Rugtvedt said.

In 1972, a royal decree was issued, demanding that Norwegian goods and services should receive preferences as long as they were competitive in terms of price and quality. A policy for knowledge transfer and research cooperation was also established.

The Norwegian regulations up to 1994 differed from the Brazilian requirements, as they set no percentage for local content in projects or investments. ANP director Marcelo Mafra, the coordinator for local content at the government body, was invited to talk about local content from a Brazilian perspective, at the seminar.

The audience raised serious doubts about the capacity of the Brazilian yards and suppliers to deliver, and local content is making it all more complicated. Petrobras aims to double its production of oil by 2020, but huge investments are required, and the gaps are plentiful, within technology, infrastructure and human resources. Rigs, supply boats, pipelines, steel, ports and shipyards are needed.

The close cooperation between government, oil companies, suppliers, trade unions, universities and research institutions is often referred to as a key factor in the “Norway experience”.

Mr. Rugtvedt talked about initiatives like NORSOK and Konkraft, where the government, the industry and the trade unions came together. Konkraft was created to identify challenges, strengthen the cooperation and increase the cost effectiveness in the sector.

Cooperation with the R&D institutions was always of vital importance, and several programs to stimulate research and reduce risk were created. In 10 years, 215 pilot and demo projects were developed and funded by the DEMO 2000 program.

The demands of the industry have resulted in the development of cutting edge technology, and today Norwegian technology is a reference in the industry, in several areas.

“In 1992,the first floating production system was implemented on Snorre. On the Troll block, new technology for horizontal drilling was developed. In 1999, we used the first subsea to floating production at the Åsgård field. This was the start of the Norwegian subsea adventure, and suppliers like Aker Solutions and FMC Technologies are world leading, controlling 2/3 of the world market “, Mr. Rugtvedt said.

According to Mr. Rugtvedt it is important to remember that it took 40 years to get to where Norway is today. Cooperation, dialogue and common standards were key factors. But dialogue and a culture for consent is certainly more simple in a small country.

“We have used Norwegian experiences in the development of our framework, but not all Norwegian solutions fit the Brazilian reality”, Marcelo Mafra from the ANP said.

“We are well aware of the challenges Brazil is facing, but we need the industry to play along, and understand that this is a long-term process. If the oil and gas industry in Norway is young, Brazil is a baby”, he concludes.

The seminar was followed by lunch at Firjan building in downtown Rio de Janeiro. Norway’s Consul General in Rio de Janeiro, Helle Klem, Raul Sanson, director at the oil and gas department at Firjan, Rune Andersen from Innovation Norway, Katarina Sætersdal from NHO and João Emilio Gonçalves from CNI were also present at the seminar.