The Norwegian hangout for the Olympics 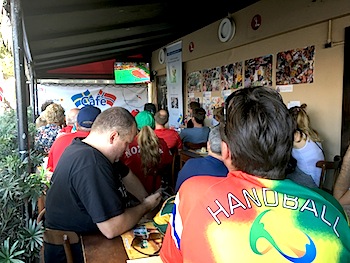 From the left; Anders Rosland, Asbjorn Vilkensen and Ørnulf Steen.Scandinavians in Rio de Janeiro have made a Copacabana bar their meeting place during the Rio Olympics.

It is the Norwegian and Swedish Churches abroad that host the Olympic café in Rio, at the bar Devassa in Rua Bolivar in Copacabana, during the 2016 Summer Olympics.

Organizing and hosting meeting places for Norwegians abroad during the Summer Olympics is something The Norwegian Church Abroad have done since Atlanta 1996.

«Our ambition is to accompany Norwegians that go abroad, and we want to be visible to both expats and visitors. For us, it is great that our café has become the number one meeting place for Norwegians in Rio during the Olympic Games», Mr. Asbjørn Vilkensen, one of the main organizers, says.

The Norwegian and Swedish Churches abroad are used to cooperating.

«This is something we usually do during the Summer Olympics, and we cooperate very well. The feedback from the visitors here at the café has been great, the location on the beach is perfect and the fact that we show the Norwegian broadcasts from the games is also important to the people who come here. Everyone is happy and very excited, especially when we win medals», he says.

The Scandinavian café opened on August 5, and attracted a full house for the opening ceremony. On August 14, a service of worship was held, and people has also gathered for a quiz night organized by Norsk i Rio.

«We want to be an available church in the everyday life of people, and we are used to having services in bars in countries like Thailand». Mr. Vilkensen explains.

Women´s handball on Norwegian TV is attracted a lot of people to Devassa. Rowing, wrestling, swimming and athletics are among the many other popular competitions that have attracted – and continue attracting people!

A nice experience
Cintia and Kjell-Peder Overvåg are among the visitors during Norway´s game against Romania on Sunday August 14. The former Havyard executive in Brazil, who moved back to Norway last year, is back in Rio for the Olympics and able to combine business and pleasure during the stay.

«We arrived in Rio yesterday, and this is our first time here. It is nice to have a place like this where Norwegians can come together», they say.

Norway´s Consul General Sissel Hovde Steen is also among the guests this Sunday afternoon. She cheered enthusiastically when Norwegian wrestler Stig André Berge won a bronze medal. Her husband Ørnulf Steen is the Secretary General of The Norwegian Church Abroad.

«Our agenda is busy during the Olympics, but I have had the chance to stop by here several times, and it is always very nice. I was also present at the church service, and despite the untraditional venue, it was a nice experience. It is important to Norwegians in Rio to have a place where they can come together, watch the competitions and meet other Scandinavians», she says.

Photo courtesy of Sjomannskirken.The café is also a venue where the Consulate General is able to provide information and assistance to Norwegians in Rio during the Olympics, and the Consulate has produced a leaflet with useful information that is being distributed at the café.

Famous visitors
Norwegian wrestler Stig André Berge later showed up at Devassa to celebrate his bronze medal with other Norwegians. Swimmer Henrik Kristiansen and his father are also among the guests that have stopped by the popular café, as well as the children and family of bronze medalist Olaf Tufte.

«We have had a lot of good talks, and we also try to promote Norwegian NGO-s in Rio, in an attempt to give them a helping hand as well. The Norwegian Church wants to play an important part in the Olympic experience, for both visitors and Norwegians living in Rio on a permanent basis», he says.