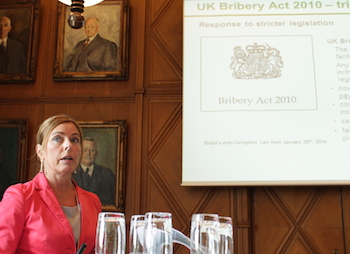 The NBCC anti corruption policy was approved and adopted by the Chamber in October 2014, and serves as guidelines for the members, officers, employees and representatives of the chamber. The anti corruption policy of NBCC prohibits all improper or unethical payments and conducts and set forth that compliance with the Brazilian legislation, Law 12.846/13, the Clean Company Act in particular. The guidelines apply to all of NBCCs activities.

Mrs. Karoline Bøhler, attorney of law at Norwegian Shipowners´ Association, praises the initiative taken by NBCC. In 2014, 3300 port calls were made by Norwegian vessels in Brazil, and several NSA members are also NBCC associates.

«The NSA expects the members to follow the same practices when doing business abroad as they do in Norway, and the NBCC anti corruption policy is a very important step. I find the initiative taken by the chamber interesting, because it contributes to increasing attention on the topic, and I believe it will bring positive consequences to the business community. Attitudes seem to be changing. Social responsibility and anti-corruption is something that concerns the industry, and today it has become an important part of educational programs and seminars. It is simply exemplary that NBCC has taken this step», Mrs. Bøhler (in the photo to the left) says in this interview with NBCC.

Common platform
Karoline Bøhler is also the NSA responsible for MACN, a platform for businesses across industries to contribute to the elimination of corrupt practices. The platform is based on the UK Bribery Act from 2010, and offers different work tools to the participating companies and organizations.

«NSA supports the vision and mission of MACN by promoting good practices among our members. We organize workshops and seminars where we discuss different situations that might occur in different countries and scenarios. The idea is to exchange experiences, learn from each other and have access to different tools. A policy on paper makes no difference if the employees of a company don´t know how to act if a situation occurs. Our ambition is to increase the level, not to sanction members», Karoline Bøhler explains.

Norwegian shipowners have to comply with Norwegian law also when operating abroad, and Brazilian companies can be held liable if breaking the law outside of Brazil. This is how anti corruption legislation differs from other legislation. But until the new Brazilian Anti Corruption Act entered into effect in 2014, Brazil had no proper legislation related to corruption.

«The new element in the Brazilian Clean Company Act as well as in the UK Bribery Act is turning compliance and initiatives of prevention into a mitigating factor. Companies with compliance policies will receive a milder treatment by the justice system This is an interesting development and an element being adopted by more and more countries.»

Zero tolerance is however not NSA, nor MACN policy.

«It would simply be too naive. We work to reduce and limit corrupt practices. Corruption is damaging, and increasing focus on the damages and the delays is important, This is why we need to to work together and try to make all parties involved understand. If a vessel loaded with iron ore is being held back, and the shipowner has a policy in place prohibiting facilitation payments, the shipowner and the customer need to be aware of the fact that there might be delays. Limiting such practices, is in the interest of all parties involved. But if a situation occurs, the people onboard the ship need to know what to do and who to contact back home.»

There is no doubt that anti corruption practices established by a company might difficult business.

«We know this happens. Your vessel might be held back, delays are a common problem if the crew refuses to pay what is being demanded. What we do in cases like this, is to try to assist the shipowner, involve the embassy and try to find a solution, and usually we manage to find a way», Mrs. Bøhler says.

So-called facilitation payments is still a topic of debate.

«Is offering cigarettes or some kind of present to be considered corruption? It is part of a «gift culture» that we are not used to, we don´t offer gifts to officials in order to get a building permit or some kind of license. But in some countries, this is customary, and we have to draw the line and know where such a practice becomes something damaging to business. It is unacceptable if the one offering the best gifts, is given a a better treatment by the officials involved. We know that in some countries, government officials even count on such gifts as an extra income, and although everything is in order, they refuse to give the license in question. This is when the so-called gift culture has to be considered corruption», she says.

Karoline Bøhler has been accompanying the developments of the investigations of corruption in Petrobras with great interest.

«I find it very interesting to see that more and more countries realize that we can´t go on like this, it is not viable, and time has come to change direction», Karoline Bøhler concludes.

In focus
Ethics and anticorruption compliance was also the topic of a presentation made by Leticia Andrade, legal counsel of Statoil do Brasil, organized by the NBCC legal committee this July.

Mrs. Andrade (to the left) outlined the new Brazilian Clean Company Act to the audience, explained how fines are calculated and talked about the benefits of leniency agreements and compliance programs.

«Companies can now be held liable for practices against public officials, and Petrobras is considered a public entity here. Consequences can be fines, publication of the decision, prevention from participation in public bids and prevention from getting public financing. The existence of a compliance program would mitigate the consequences. The new law has also made leniency agreements a hot topic in Brazil, an incentive for the company to collaborate with the authorities to reduce the penalty», Mrs. Leticia Andrade explained.