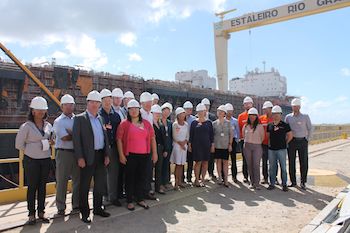 The Norwegian delegation at the ERG1 shipyard.The Rio Grande shipyard (ERG) is currently manufacturing 8 FPSO hulls and 3 drill ships for Petrobras and Sete Brasil. Quip made the headlines last year for having three platforms under construction at the same time. The platforms built at Quip and delivered to Petrobras in 2013/2014 will increase the company´s oil production by 25 per cent! Quite amazing when you take into account that eight years ago, there where no shipbuilding activities in the region. Petrobras has placed 36 per cent of its ship orders in shipyards in Rio Grande, making the naval hub in the region among the most important in Brazil, even though the town of Rio Grande only has about 200.000 inhabitants.

“These yards we are visiting, are building both competence and the industry at the same time, and it was a very good visit”, Gulbrand Wangen, the Intsok regional director of Brazil, said. The visit to the southern Braziilan region is organized by Intsok and Innovation Norway, and the Brazil director of Innovation Norway, Helle Klem, the Norwegian Consul General Helle Klem and the Norwegian honorary consul in the region Tony Rover were also among the participants.

“We are here to see how we can expand our business in Rio Grande do Sul, and present the Norwegian companies to the procurement management of the yards”, Mrs. Helle Moen explained

From the right the general manager of the ERG1 shipyard, Mr. Heder Santos accompanied by procurement manager Lourenço Lustosa Fróes.High activity level
At the Estaleiro Rio Grande 1 and 2, owned by Ecovix, eight FPSO hulls are under construction, and the Norwegian delegation met with the general manager of the shipyard, Mr. Heder Santos and with Lourenço Lustosa Fróes, the procurement manager for the FPSO conversions. This contract has a value of 3,5 billion USD. At the ERG2, Sete Brasil has placed the order for three drillships, a contract worth 2,4 billion USD.

During the visit to the ERG shipyard, the Norwegian delegation was given the chance to see two of the hulls under construction, the P66 and P67.

“The construction of the FPSO hulls is our main business here at ERG1, and this shipyard is considered a major facility for the construction of offshore infrastructure in Brazil. It was initiated by Petrobras, and then bought by Ecovix in 2010. It is the first facility for serial production of naval constructions in Brazil, and our dry dock has the capacity for two vessels”, Mr. Fróes explained. Japanese Mitsubishi recently bought 30 per cent of the ERG shipyard, and the Japanese is bringing in heavy competence and a vision to increase productivity at the facility.

Historic accomplishments
The Norwegian delegation also visited the Quip shipyard, a pioneer both in the region and in Brazil, according to Alexandre Barreto, the operational manager for naval activities at the yard. The yard was founded in 2005, and delivered its first vessel in 2008. Here the Norwegian companies were given the opportunity to present themselves, their products and services. Both Eaton Hernis, a provider of CCTV systems, and lifeboat producer Norsafe have supplied or will supply the Rio Grande yards with their equipment.

“The multi purpose offshore vessel P53 was the first project we built here, and it was also the first FPSO built in Rio Grande do Sul. Today this platform is operating in the Campos Basin, producing 180.000 barrels of oil per day. The semi-submersible P55 is one of the biggest of its kind built in Brazil and the first in Rio Grande”, Mr. Barreto said.

The FPSOs P63 and P58 are other vessels in the Quip portfolio, and the shipyard actually made history in 2013 for having three platforms under construction simultaneously. 400 million reais have been invested in the shipyard facilities since the foundation in 2005 up to 2013, in accommodation and expansion of the piers.

“The next projects are the FPSOs P75 and the P77. Both are conversions, mooring in the second half of 2015”, Mr. Barreto said.

Two other shipyards are under construction in the region, and the Norwegian delegation was given a thorough presentation of the EBR shipyard, which landed a contract to build the FPSO P74 for Petrobras in April 2013.

“We are a step behind the others, and have no operations yet, but the production of modules will start next month”, Marta Krafta from EBR said. EBR is a joint venture between the Japanese company Toyo and the Brazilian Setal. The production capacity is 100.000 t/ year of steel processing, and the yard will have a 700 meter long pier, enabling it to work on two platforms at the same time.

“The yard will be completed in the end of 2016. Some say EBR is the last big shipyard Brazil will have space for”, Marta Krafta said.

The shipyard Wilson Sons are under implementation in Rio Grande.

Procurement strategies
According to estimates, more than 1500 subcontractors are currently involved in the projects at Estaleiro Rio Grande alone, and the Norwegian visitors were interested in knowing how to proceed to become suppliers. The yards expressed an interest in using local suppliers, and the state government has several initiatives to incentive investments in the region.

Company presentations at the Quip shipyard.Today Ecovix is responsible for the procurement and the supply contracts, but it is Petrobras that approves the technical proposals from vendors and make the final decision. Some packages will be bought overseas, but the integration of the drill ships will be done at ERG2. On the bigger items, procurement is administered from Rio de Janeiro. EBR plans to do the procurement from a local office in the future. Today this is done at the main office in São Paulo. To Daniel Garrido, business development manager at IKM Testing Brasil, this was useful information.

“The visit was very relevant to me, and I got a lot of information about future projects that I was not aware of. The visit will definitely help me in the follow up with the procurement management of the yards when I come back to Rio de Janeiro. This first contact is important, and for me, the moment to act, is right”, Mr. Garrido said.

Seven other Norwegian companies, representatives of Innovation Norway, Intsok and NBCC took part in the delegation. Pedro Dias from Kongsberg Maritime was very satisfied with the shipyard tour and expressed interest in the training program at the yards, as Kongsberg offers a broad range of courses.

Roney Parente represents Marine Aluminum, who provides aluminum helidecks and telescopic gangways. He was impressed by the advanced infrastructure he saw at the yards, but suggest the yards also think beyond 2020, when all current projects are delivered.

“My ambition is to create synergies with local companies, and I think they need to consider retrofit and the renovation of oll platforms. There are 80 platforms in operation in Brazil today, and they are going to need maintenance”, he said.

Rui Orsini from Aptomar found it interesting to know the priorities of the local yards and their views on the market. The opportunity to visit the yards was the main reason Jan Kleivene from Eaton Hernis took the long trip from Arendal, Norway. The company recently landed a contract with EBR, and was curious to know more about the yard, and have contracts to deliver equipment to all the three drill ships being built at ERG, through NOV.

The estaleiro Rio Grande has a big dry dock with the capacity to fit two huge vessels under construction.A proud day
Suzana Barros, the area manager of South America at Palfinger Dreggen do Brasil, was excited after the visit. She was in Rio Grande 7 years ago, and was impressed with the progress.

“Today I am proud to be Brazilian. There has been so much talk about delays, but these are professional, productive yards using first class technology. Heavy investments are being made, and I see new business opportunities. There is no reason why Brazil should´t succeed”, she said.

Gulbrand Wangen of Intsok suggests that the RG yards should cooperate to stand stronger in the competition with yards around the country.

“If these yards cooperate, they can dominate the Brazilian market. What we have seen here today, is certainly promising”, he said.