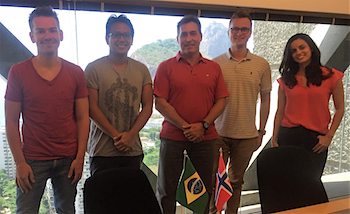 A group of PHD and Master students chooses Rio to conduct study on business relations between Norwegian companies in Brazil and their Brazilian business partners.

Earlier this year, PhD student Edson Muylaert and four Norwegian students from the University of Stavanger (UiS) used the business incubator office in the Rio Sul business tower as the base for the project.

Edson Muylaert is currently a PhD student at the Coppead|UFRJ Business School, but he has over 20 years of experience as a consultant and as an executive for global organizations in the Oil & Gas, Media & Communication and Health Insurance, among others. The Norwegian participants Iara Balo, Tobias Bratebø, Christoffer Haaland and Eirik Runestad are taking their Master´s degrees in Science at UiS.

Presented the first results
Mr. Muylaert just came back from Stavanger, where the group presented some of the preliminary findings of the study, at the 23rd Nordic Workshop on Inter-Organizational Research.

«Our research was actually considered one of the most interesting presented studies during the workshop. Our objective is to identify and understand the main business relationship tension events and what the causes are between Norwegian and Brazilian companies. When you go abroad to do business, you go with a certain mindset and even small things could have an impact and give you the perception of distance. It is of course early to conclude, but we see that it is very much about trust behaviors in these relations and a better understanding of local business specificity», Mr. Muylaert explains.

The research project is an initiative taken by Professor Terje Våland at the University of Stavanger Business School. UiS has a research agreement with COPPEAD, and it was the Norwegian professor that suggested that students from the two countries should look into these cross-border business relations.

The group started with identifying Norwegian companies, mostly in the oil and gas sector, operating in Brazil and contacted key people in these companies. The Norwegian companies indicated and invited their Brazilian business partners to take part of the research. The objective is to better understand the nature of their relationship.

Patterns
So far, the researchers have interviewed seven Norwegian and three Brazilian companies.

«We have interviewed representatives from several companies and we already see patterns. Brazilians need time to build trust, and they are more protective. Naive is a word we have heard many times when talking about Norwegians. At the same time, Norwegian companies approach the Brazilian business arena with a Nordic mindset, and that’s not the caso for doing business in Brazil», Mr. Muylaert says.

The companies were asked to rank the importance of tension events and incidents and identify their causes. Taxes and regulations are topics causing friction. Things one take for granted, can also cause headaches when faced with a different business culture. Project delays and overcost most often have their causes related to different business mindset approaches.

«In the first interviews, the participants were defensive and we understand that nobody really wants to expose problems. But after a while, they realize that exploring this topic is mutually beneficial. We are not interesting in blaming anyone. This is an academic research and later we would like to look deeper into the causes and maybe do workshops with companies to work on issues and better prepare them for business ventures abroad. The goal is a better understanding, and how business relations happen, how people behave and why we see things differently», Edson Muylaert says.

The project is financed from Norway, and the will be concluded in 2020.