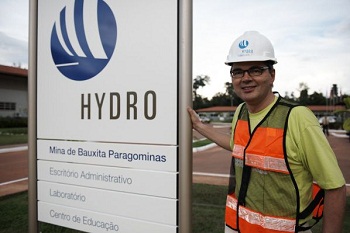 Vale is the world’s biggest iron ore exporter and sold its stake in Norsk Hydro for $1.8 billion, about half the holding’s value when the Brazilian company acquired it in 2011.

Vale sold 407.1 million shares in Oslo-based Hydro for 25 kroner each, according to a statement Vale.

The sale of Hydro shares is consistent with Vale’s strategy of reducing its exposure to non-core assets, and a result of its focus on discipline in capital allocation and value maximization for shareholders. According to Bloomberg, the miner is selling assets and focusing on its more profitable iron-ore business in a bid to recover profit margins after commodity prices fell.

Seat on the board
In 2010, Hydro entered into an agreement with Vale to combine the majority of Vale’s bauxite, aluminum assets with Hydro’s existing business. Vale received a total consideration comprising USD 1.1 billion in cash and new Hydro shares equivalent to a ~22 percent ownership in Hydro. Vale currently has a representative on the board of directors of Hydro.

The share consideration was subject to a two year lock up that expired in February 2013.

After the completion of the transaction on November 12, Vale has reduced its shareholding, through its wholly-owned subsidiary, from 447,834,465 shares to 40,712,224 shares, thereby reducing its ownership share in Hydro from 21.6% to 2.0% of the shares authorized and issued.

If the over-allotment option is exercised in full, Vale will not hold any shares in Hydro.

Nordic investors
According to a press release from Hydro, the shares sold from Vale have been purchased by several investors. Approximately 40% of the deal was allocated to Nordic investors, and the offering was significantly over-subscribed

The DNB office in Rio de Janeiro played an important part in the transaction, and this is the largest ever block trade in the Norwegian market.

DNB Markets was engaged by Vale together with Morgan Stanley to structure and execute the offering.

Settlement is expected to take place on 15 November 2013. Vale has agreed not to dispose of any further Hydro shares for 180 days following the completion of the offering, subject to certain customary exceptions.

Hydro in Brazil
Brazil is Hydro’s main source of the important raw material bauxite and is the country where the company has the most employees – or more than 6,000 if long-term contractors are included.