Warming up for the World Cup 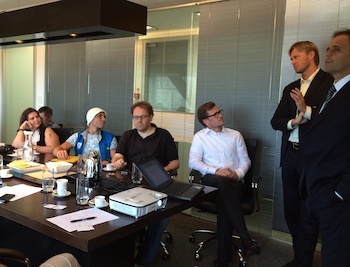 A group of ten Norwegian journalists is spending the week in Rio de Janeiro to broaden their knowledge on Brazil and prepare for the upcoming World Cup.
The journalists represent important Norwegian news organizations like TV 2, Dagens Næringsliv, Dagbladet and others, and NBCC president Halvard Idland were among the people invited to speak to the group during an information day with «Team Norway» at the Consulate General in Rio de Janeiro on April 22, 2014.

Mr. Idland presented the NBCC to the group and explained how the Norwegian presence in Brazil has increased significantly the last years.

«Our purpose is to promote trade and business between Norway and Brazil, and help our members on important issues», Mr. Idland explained. He was accompanied by NBCC board member, the president for Aker Solutions in Brasil, Mr. Luis Araujo. Both (in the photo to the left) are convinced it´s going to be a fantastic World Cup and expressed great expectations on behalf of Brazil.

It is the Norwegian Institute for journalism (IJ) that has organized the visit to Rio de Janeiro. IJs ambition was to show the journalists that Brazil is so much more than «football and samba». During the week in Rio de Janeiro, the group also visited the Santa Marta community, the met with Fifa, visited Maracana and the Norwegian NGOs Dream Learn Work and Karanba.

«We are here to broaden our perspective on the socio-economic situation in Brazil. You can call it a mixed mission, and we would like to learn more about other issues in the Brazilian society, a part from football and samba», project leader and organizer Frode Rekve from Institute for Journalism, explains.

Oil over football
Another NBCC board member, Mr. Tom Mario Ringseth from DNB gave the journalists a brief economic outlook. He also talked to the group about the «Maracanazo» in 1950, the tragedic outcome of the world cup final, where Brazil lost to Uruguay. Many Brazilians fear this might happen again in 2014. Mr. Ringseth expressed admiration for players like Garrincha, and somewhat less admiration for some of the current players, who seem more preoccupied with their haircuts than anything else.

«The inflation rate in Brazil is currently above the target rate. The need for investments in infrastructure is huge, and Brazil also needs a tax reform and political reforms. We expect that the Brazilian GDP will grow about 2 percent per year the next years. Still Brazil will become the world´s 6th largest oil producer by 2035, according to IEA numbers, and I´ll tell you one thing: The development of the Brazilian oil and gas industry is much more important to the Brazilian economy than the upcoming World Cup», Mr. Ringseth said.

Consul General Helle Klem was the first speaker of the day, and she introduced «Team Norway» to the group. She also talked about the main tasks at the Consulate, presented som facts about Rio de Janeiro, home of 85 percent of the total Brazilian oil production, and explained to the group how Norwegian companies in Brazil have a good reputation and are known as reliable. Norwegian companies have invested more than 20 billion USD in Brazil.

«Innovation Norway is a door-opener for Norwegian companies in Brazil», he said.

An attractive market
Adhemar Freire from Intsok – Norwegian Oil and Gas Partners explained that Brazil is a target market to Intsok companies, many of which are suppliers to the Brazilian oil and gas industry. He also talked about the great market opportunities in different sectors within the oil and gas industry.

Ricardo Cesar Fernandez from Abran, the Brazilian branch of the Norwegian shipowners´association (NSA) also concentrated on the great opportunities in the Brazilian market.

«46 discoveries has been made in Brazil the last 14 months and 15 of these were made in pre-salt areas. Brazil currently has the world largest order book in relation to its current fleet. In 2012 Norwegian offshore support vessels made 1500 port calls in Brazilian ports, and one of four offshore vessels sail under Norwegian flag», Mr. Fernandez said.

He also outlined some challenges, like the lack of skilled labor, the heavy tax burden, local content requirements and the lack of maintenance yards.

«Despite this, Brazil is considered a very attractive market to Norwegian shipowners», Mr. Fernandez said.

Elisabeth Bie, journalist at Stavanger Aftenblad and one of the participants on the mission to Rio de Janeiro, is planning to return to Brazil in a couple of years.

«I am curious about what happens to a country that hosts big events like the World Cup and the Olympics. There has been a lot of focus on Brazil lately. The country is growing and there have been several positive changes. I am here to get as much information as possible, and would like to come back in a couple of years to see what has happened», she says.