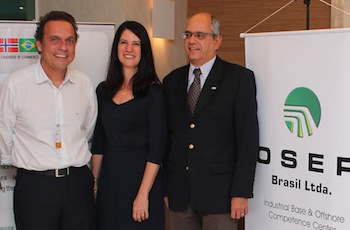 The mayor of Macaé calls upon the industry to help building the future of Macaé and consolidate the city as the oil capital of Brazil.

Dr. Aluízio dos Santos Júnior is a neurosurgeon, born and raised in Macaé. In 2010 he was elected for the federal parliament, where he was considered a very active deputy, until he resigned in 2012 to take office as mayor.Macaé, located about 180 kilometers north of Rio de Janeiro, is an important offshore support base with the presence of leading service providers to the oil industry. It is commonly referred to as the oil capital of Brazil, as about 80 percent of the total national production, is produced on platforms outside of Macaé.

Dr. Aluízio dos Santos Júnior of the Brazilian Green Party (Partido Verde) was elected mayor of Macaé in 2012, and during a NBCC event in Rio de Janeiro on February 26, he talked about Macaé as an offshore hub and about the plans and prospects for the upcoming years.

“I would like to invite the industry to discuss how we can shape the future of Macaé together. Local authorities would like to know what you need, and we need to figure out how to benefit both the industry and the population in the best possible way”, Mr. Aluízio dos Santos Júnior said during the event that took place at the “Federação das Câmaras de Comércio Exterior” (FCCE).

There are 57 production platforms outside of Macaé, producing about 1,56 million barrels of oil per day. Thousands of people leave or enter Macaé every single day, making the city an important logistical base.

Mayor Aluízio dos Santos Júnior talked a lot about the responsibility of the industry to take action and make demands. Such positive pressure could lead to improvements for both the industry and for the local population. Better roads and more flights to the local airport were some of the examples given.

NBCC president Paulo Rolim (to the right) expressed great satisfaction about hosting this event with Mr. Aluízio dos Santos Júnior (to the left), as it is important for the chamber to share success stories and show the good examples from the Brazilian oil and gas industry. The event was sponsored by OSEP, here represented by Riza Batista, CFO of OSEP, in the middle.“You have to understand that you are fundamental in this process. Together we can create important synergies, and the authorities depend on your participation. It is quite complex to manage these important resources and we need to share the responsibility. Macaé is the only city in Brazil that feels the impact of the oil industry directly every single day, meaning that the industry also has obligations to the population of Macaé.”

Port project
He also called upon the industry to support the project of a new port in Macaé, a private project of vital importance to the region. The port will attend offshore industry exclusively, and the authorities of Macaé argue that the project is viable due to the infrastructure already present in the region, and the strategic location close to the Campos and Santos Basins.

“Macaé without a new port is like a shopping with no parking. It is fundamental that the industry supports this project”, he said.

To local authorities, actions to improve urban mobility, security and environment are other priorities. New roads are under construction, and a local technology centre under development

“We work to generate a positive business environment and promote human development. We want to attract knowledge, create synergies with universities and attract companies with a high potential for innovation”, the mayor said, and continued:

NBCC president Paulo Rolim thanks mayor Aluízio dos Santos Júnior with a book. In the middle, Paulo Marcondes Ferraz, who is the president of FCCE.“Macaé wants to specialize in petroleum. All industrial activities in Macaé are in some way or the other linked to petroleum already. It dominates the whole municipality, and I would like to invite the industry to take part in the administration of our common future. We need to figure out how to continue this walk, side by side. Macaé is reality, not a promise”, Aluízio dos Santos Júnior said.

The event was organized by the NBCC and sponsored by OSEP, an industrial base and offshore competence center in Macaé, where companies can rent workshops, warehouses and offices.