We learn a lot from Norway 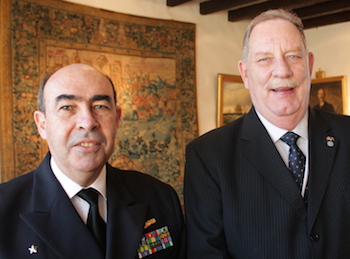 Not many countries around the world have an autonomous, specialized court for maritime affairs like Brazil, and in this interview with NBCC, Vice-Admiral Marcos Nunes de Miranda, current president of the Brazilian Maritime Court, and Vice-Admiral Claudio Portugal de Viveiros, the director of Ports and Coasts (DPC) in Brazil, talk about the significance of Norway for the Brazilian maritime and offshore sectors, as well as Brazilian rules and regulations.

As Brazil is outpacing Norway as the world´s main offshore market, Norwegian shipowners are increasingly turning their attention to Brazil, and Norwegian shipping companies already have a remarkable presence in Brazil. In 2014, 3300 port calls were made in Brazil by Norwegian vessels, a substantial increase since 2010, when only 1500 port calls were made. Norway is currently home to the second largest offshore fleet in the world. The sea is also of great importance to Brazil. 91 percent of today´s oil production comes from the sea, and the Brazilian Navy is following the traffic of 1200 merchant vessels in Brazilian waters, on average, every single day.

«It is important that foreign players are aware of the fact that Brazil and our coastline is protected by a set of laws of navigational safety. If they get involved in an accident or incident of any kind, they will receive a fair treatment by a highly specialized court. Navigational safety is a great concern to the Brazilian Marine and to port authorities», Vice-Admiral Marcos Nunes de Miranda says.

He presides over the Brazilian Maritime Court, a federal body with jurisdiction to judge accidents and navigations casualties, established in 1931. The court has a president and six specialized judges, and is an auxiliary body to the civil judiciary system. Decisions made by the Maritime Court is in most cases respected by the civil court. Having a specialized court like this is an advantage, Mr. Miranda argues, and any vessels of any flag within Brazilian waters, including rigs, recreational boats and research vessels fall within the court´s jurisdiction.

Together with Vice-Admiral Claudio Portugal de Viveiros, Mr. Miranda visited Nor-Shipping in Norway earlier this year. They also met with representatives from the Norwegian maritime authorities to exchange ideas and experiences on jurisdictions and regulations.

Vice-Admiral Claudio Portugal de Viveiros«The Norwegian maritime presence is of great relevance to Brazil and the maritime activities here. Norway has significant operations in Brazilian waters, and the ties between our countries are important. The visit to Norway provided us with a chance to explain how the Brazilian system works, meet with our Norwegian colleagues and discuss what we can do to improve cooperation further», Vice-Admiral Claudio Portugal de Viveiros says.

MUTUAL BENEFIT
The lack of information can potentially cause problems for foreign players operating in Brazil.

«This is why events like this, where we have the chance to exchange ideas and knowledge, is important to reduce misunderstandings. There might be cultural differences between countries and we all have to adapt, but the Norwegian maritime presence in Brazil requires that you have both knowledge and understanding of how we work. We can never let this become an obstacle, hindering increased presence, because in my opinion, increased collaboration will benefit both our countries», Vice-Admiral Claudio Portugal de Viveiros says.

A REFERENCE
Brazil has 8500 kilometers of coastline and a continental shelf of 950.000 km2. It is an area of great economic importance to Brazil and frequently referred to as the “Blue Amazon”. Ensuring the safety of all waterway navigation in Brazil, to implement and monitor the fulfillment of laws and regulations and also to prevent pollution by vessels, platforms and support facilities is the responsibility of the Brazilian Navy.

«Norway is a reference, in so many areas, and efforts to improve are continuous. This is something that should serve as a motivation to us Brazilians as well, to never think that you have reached the maximum level. Ideally we should always exchange information and continue improving our system in order to improve quality – always.»

Vice-Admiral Marcos Nunes de Miranda speaking during Nor-Shipping legal seminar.How the future seems to be a concern to Norwegian stakeholders, made an impression on the two Vice-Admirals.

«We left Norway with a lot of impressions and new ideas, not only about current developments, but also regarding concerns for the future. A lot of what we discussed here, reflects the next steps for maritime activities around the world and «what´s next» was among the phrases I heard repeatedly during meetings and events. This vision, this perspective is important and contributes to strengthening the relations between Brazil and Norway even further. Brazil is attracting a lot of attention and curiosity, and to us, this chance to exchange ideas and better understand each other, increases the value of our relations. Our ambition is to increase Brazil´s presence and influence in the maritime setting,»Claudio Portugal de Viveiros says.

«We learn a lot from the Norwegians, from their vision and concern about the future of the people and of the maritime industry. We are still learning how to be a big player», Mr. Miranda says.