X-mas churrasco ended in the pool 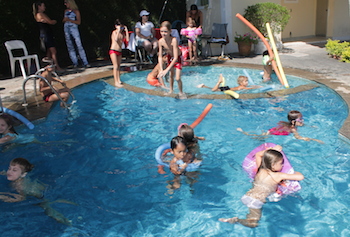 To the delight of the many children present, this year´s traditional NBCC Year-End event started with a Brazilian churrasco – and ended as a pool party.

More than 100 guests found their way to Princess Ragnhild´s Church in Gavea, Rio de Janeiro, the venue for this year´s traditional Year-End event for NBCC associates and families.

Refreshingly cold drinks and a Brazilian churrasco were served for lunch during the family event on December 7, 2014. Representatives from SIS, DOF, DNB, Kincaid, Teekay, Tridimensional, Havila/Havyard, Palfinger, Panoro Energy, Brazilship/Scanbrazil, Urca Offshore – and many others, as well as Consul General Helle Klem and consul Johnny Håberg of the Norwegian Seafood Council, were among the guests. Even a group of monkeys that lives in the trees surrounding the property, marked its presence at the party.

The youngest generation enjoyed the Norwegian Christmas cookies known as «pepperkaker», and the traditional «Kransekake», a kind of almond cookie in the shape of a Christmas tree, was also to find on the coffee table.

Several recreational activities for the children were organized, and the little ones played football, volleyball, they painted, gained colorful tattoos and received presents from the organizers. They had popsicles in the hot afternoon sun – as many as they wanted. But it was definitely as they were allowed to enter the pool, that the children´s enthusiasm hit the roof-  and the event turned into a regular pool party. «One of the best days of my life», as Lukas (9) stated.

Spoiling the fun of the children was also a concern to NBCC president Halvard Idland in his address to the event. He did however take the chance to thank the members for the strong support and participation throughout the year.

«This has been an interesting year for the NBCC, and we have promoted several successful events The Rio Oil & Gas Networking dinner was without a doubt a highlight, with a record attendance of 650 guests. There are not as many present here today, but there are much more children here today, so I don´t want to take up any more of your time», he said, wishing everyone a merry Christmas and a happy new year.

Many NBCC members are looking back on 2014 as a challenging year, but when looking forward, optimism seems to be taking over.

Hans-Kristian Fjærem (nr 3 from the right) and colleagues from SIS.«A challenging Brazilian market in 2014 has influenced our business, but we believe that recent events will result in improvements, and Star Information Systems intends to stay in Brazil and prepare to approach the market actively as things turn», says Hans-Kristian Fjærem, Director of Star Information Systems do Brasil Ltda. The company aims to become a bigger player in the Brazilian market in 2015.

«Sale and marketing are priorities, and we are also launching a new system for fleet supply management. Our ambition is to contribute to maximizing profitability for our customers.», Mr. Fjærem says.

Marcelo Müller is the director of Tridimensional Engenharia and also the coordinator of the NBCC Financial Committee.

«It has been a difficult year for our sector, but now we see new opportunities, and I believe that we will see great improvements for the second half of 2015. Norwegians and Brazilians are gaining a better understanding of how to to business with each other  and what we have to offer one another. In my opinion this will create even more opportunities in the years to come», Mr. Müller says.

The guests at the event could also enjoy a photo exhibition with photos taken by students of the non-profit organization Dream Learn Work created by Norwegian companies in 2006,  during the Christmas party.

From the left: Rune Andersen, Helle Klem, Michael Klem, Iris Frøysbu and Johnny Håberg.Iris Frøysbu, representing Dream Learn Work, is very satisfied with the year that is now coming to an end. A new model of courses being offered to the students has been implemented, and this has resulted in less students dropping out. Dream Learn Work  provided courses for 49 new students in 2014, while 29 students continued from earlier years.

«We are able to follow up the students more efficiently, and more than 90 percent of our students complete the courses. This is a solid increase to us. We have improved our relations with the companies and several new companies are showing interest in cooperating with us next year», Mrs. Frøysbu says.

In 2015, Dream Learn Work will be launching a database of CV´s of the students, to assist them in finding relevant jobs in the industry.

During the visit of Deputy Minister of the Ministry of Foreign Affairs, Mr. Morten Høglund, in November, Dream Learn Work also received a Christmas present in advance.

«Norwegian authorities are supporting us with 1,3 million Norwegian kroner, while the companies will contribute with the other half. This is very important to our work, and enables us to offer even more courses to students and strengthen our organization further. The dialogue with the local companies is good and looking forward, we are very optimistic», she says.

Click here to see more photos from the event.