«Your business is my business» 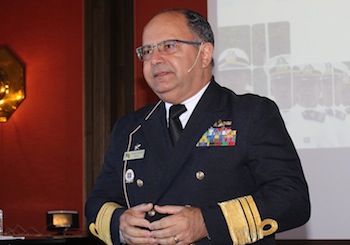 Vice-Admiral Wilson Pereira de Lima Filho was the keynote speaker at the seminar.

Legal seminar organized by Abran and the Norwegian Shipowners´Association examined different legal and regulatory aspects of the maritime industry, relevant to Brazilian-Norwegian collaboration at sea.

The sharing of experiences was the ambition of the seminar, that took place in the headquarters of the Norwegian Shipowners´ Association in Oslo on June 1, 2017. The welcoming remarks were given by Abran president José Roberto Neves and by NSA president Hans Olav Lindal:

«Brazil should expect to attract new investments and this will drive a new cycle of economic growth in the maritime industry», he said, and saluted the close maritime cooperation between the two countries.

«The maritime sector is one of the most global sectors of the world, and regulations need to be developed to meet future challenges», she stated.

BLUE GROWTH
Director of Ports and Coasts, Wilson Pereira de Lima Filho was the first of the keynote speakers to give his presentation. He introduced the DPC, the structure of the directorate and also the main responsibilities of the entity. It is also the responsibility of DPC to supervise the operations of foreign vessels in national waters.

«You might be asking yourself, what is my business here? My business is the safety of navigation in Brazil, the safeguarding of human life in Brazilian waters, the protection of the maritime environments and the training and forming of seafarers in Brazil. When you send your ships to Brazil, you have to follow our regulations. I am responsible for making and modernizing these regulations», he said.

The 37 ports and 43.000 kilometer of navigable inland waterways is another responsibility of DPC. Today the offshore support vessel fleet in Brazil counts 277 vessels, and a significant portion is owned by Norwegian shipowners.

«But our work with the shipowners form Norway is easy for us, because you want to do what is right. Norway is an important partner of Brazil, and the sea connects us», Vice-Admiral Lima Filho said.

Birgit Løyland, Director General Ministry of Trade and Fisheries, presented the Ocean Strategy, launched by the Norwegian Government in February this year.

«The strategy focuses on three main themes – the development of the best possible framework conditions for good and proper use of ocean resources, the facilitation of more knowledge and technology development and internationalization and market access. We see the ocean as a new economic frontier», she said.

According to OECD, the ocean could more than double its contribution to the global value added, reaching over USD 3 trillion.

«We have high hopes for the ocean economies. Today they represent more than 70 percent of our exports. We intend to work with Brazil to make the most of its potential», Mrs. Løyland said.

ACROSS BORDERS
The mission of the Norwegian Maritime Authority (NMA) is not very different from how it works in Brazil.

«Our mission is to safeguard life and health, the environment and property», Director General of the Norwegian Maritime Authority, Olav Akselsen, said in his keynote. He explained how international regulations, and no national regulations apply for offshore vessels. For offshore mobile units, a set of national rules has been developed.

«NMA is a driving force in the development of regulations in international bodies», Mr. Akselsen said, and also provided the audience with several examples, like the Gas Code.

«New regulations represent a transition for all stakeholders and consistent implementation is important», he said.

During Norshipping 2017, Mr. Akselsen identified two megatrends – the focus on new technology (like unmanned ships) and on increased environmental requirements. The shipping industry today represents 2,2 percent of the world´s CO2 emissions, and Mr. Akselsen expects more focus on reducing emissions in the future. He also presented vessels using alternative fuel solutions, and said that NMA welcomes and supports these developments.

Flavio Valle, representing Prumo Logistica Global, presented a case study on the Açu Port in the north of the state of Rio de Janeiro to the seminar. The Açu Port is operational since 2014, and is located about 150 km form the Campos Basin.

«Brazils infrastructure is lagging behind, with few ports with the water depth to receive big vessels» he said in his presentation.

Henrik Schiander, Compliance and CSR, at Western Bulk talked about the MACN network, a global network working towards a maritime industry free of corruption, established in 2011. The platform is based on the UK Bribery Act from 2010, and offers different work and training tools to the participating companies and organizations.

«MACN has more than 80 members, and we have a strong support, despite the difficult times the shipping industry is going through. We would however like more members from Latin-America, currently we only have one member from Chile», Mr. Schiander said.

A light lunch with the speakers closed the legal seminar.