A new boost for partnerships 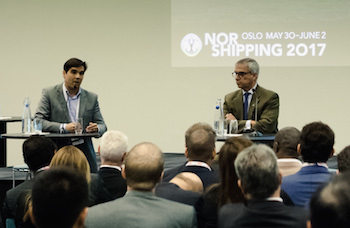 Despite hitting rock bottom, Petrobras has spent 22 billion USD on assets from Norwegian suppliers and service providers the last 5 years.

As Petrobras is now leveling out and strengthening its financial position, there should be plenty of opportunities for suppliers still willing to give Brazil a chance. «Partnerships» was a word that the speakers used repeatedly during the Brazil@NorShipping seminar on May 31, 2017.

Juliano Dantas, the General Manager for Procurement Strategy and Supplier Base Management in Petrobras, was one of the many high level speakers, and two other Petrobras executives accompanied Mr. Dantas to Norway this month. A 60 people strong delegation from Brazil was present at the maritime event. This was the 26th edition of Nor-Shipping, making it  the longest running event of its kind in the world.

«What our presence here means is that, despite the downturn, we are here for the long run. Petrobras wants to hear the market and believe in finding the solutions together with our partners. The Brazil agenda during Nor-Shipping demonstrates that Norwegian stakeholders are willing to hear people out, but also to challenge established views, and it shows that the Norwegian naval industry looks beyond the short term», Mr. Dantas said.

Back on track
In the first of two presentations to the Brazil@Norshipping seminar, Mr. Dantas presented the transformational journey of the Brazilian oil company. Petrobras has been successful in reducing its debt and the divestment program is going as planned. Changes in the Brazilian regulatory framework is also helping Petrobras back on track.

The production forecast of Petrobras is now 3,4 million boeds in 2021, and the divestment program is an important tool to reach the goals set.

«The turnaround is giving a new boost for partnerships, and we look for strategic partners to overcome challenges, among operators, suppliers and within R&D. Did you know that Petrobras has actually spent 22 billion USD on assets through Norwegian companies the last five years? Today we acknowledge what happened, but we are still looking ahead and we are confident that we will get there and create a sustainable industry together with our partners», Mr. Dantas said.

Wrong people in charge
In a panel on the new rules of the Brazilian oil and gas industry, chairman and CEO of Siem Industries, Mr. Kristian Siem, joined Mr. Dantas, and his tone was not as positive as the Petrobras executive´s.

«We have been present in Brazil for many years as a contractor and it has not been easy. Brazil has huge resources and the Brazilian people is also a resource. But you lack leadership, and elect the wrong people, some even criminals, who also put the wrong people in charge of Petrobras. Partnership means working together and  lack of predictability is also a problem. I hope you take this message home, because somethings needs to change», Mr. Siem said.

He argued that the decision making process in Petrobras is a problem, but also expressed a will to help.

«We are not afraid of water depths and we are equipped to work with Petrobras. The potential in pre-salt is phenomenal, and I hope we can find an effective way to work. In inefficiency there is also opportunity». Mr. Siem said.

Other industry leaders like Luis Arajuo, CEO of Aker Solutions and Felipe Meira, VP of Farstad Americas, were also on the panel and they supported the views of Mr. Siem.

«Petrobras got too slow, and Brazil cannot depend solely on Petrobras», Mr. Araujo said.

The Petrobras executive Juliano Dantas acknowledged that Petrobras has had a decision making problem.

«Today we acknowledge what happened, and we understand that predictability is vital going forward, but we are still looking ahead and we are confident that we will get there and create a sustainable industry together with our partners». Mr. Dantas said during the Brazil seminar.

In his address to the Brazil Podium, Sturla Henriksen, the CEO of NSA, said he believes in recovery, both for the Brazilian and the global oil and gas industry.

«Both Brazil and Norway have been hard hit, and we recognize that Brazil has had substantial challenges politically and difficulties in Petrobras. We follow this with keen interest and are very respectful and sympathetic with regard to the challenges your are facing. There are encouraging signs. A crucial point now is the speed of implementation», Mr. Henriksen said.

During the seminar, Juliano Dantas and Mauro Andrade, Head of Supply Chain South America at Statoil Brasil, were asked to give an outlook of the future demands.

«Despite the reductions we have made, Petrobras has a significant investment plan. We are confident, and we are more reliable than before. We have 263 support vessels n our fleet. The need for cost reductions, HSE enforcement, local content requirements and flag protection rules pose challenges, but there are also opportunities, as our renewing rate is about 40 OSVs per year», Mr. Dantas said.

Petrobras is also preparing to decommission 13 platforms and 300 km of flow lines the next 5 years. He also argued that upcoming ANP bidding rounds represent opportunities, and explained how Petrobras would like to use procurement as a business logic provider for innovations.

Mauro Andrade also expects future projects to create a great demand, and explained the next steps on blocks like BMC-33 and Carcará.

Beyond 2018
Closing remarks were given by Kjetil Solbrække, Head of the Rio de Janeiro office of Rystad Energy. He welcomed the enthusiasm and the will that many of the speakers demonstrated, but also described the lessons learned as very expensive.

«Everybody is in favor of Brazil, and from a Mother Nature point of view, Brazil sits on the world´s best oil play. You just need to manage it properly, and diversity is a key word, both when it comes to operators and suppliers. Regulations need to build on common sense, and leadership is key going forward. I think many players have realized that Brazil is much more complex. The main uncertainties are taxes and regulations and environmental licensing, but also the political consensus beyond the 2018 election. There is no doubt about the attractiveness. The question is, do we have the courage to go in and invest heavily again. It is essential that Petrobras delivers, and developing new partnership models is fundamental. I think we will see a lot of collaboration going forward». Mr. Solbrække said.