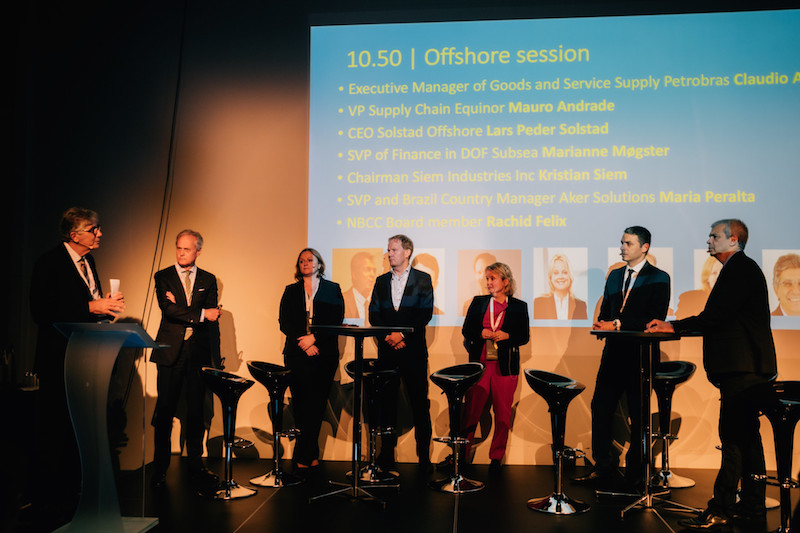 The third edition of Brazil@Nor-Shipping brought important takeaways and recent development of the Brazilian maritime and offshore market.

The Brazil Podium is an initiative by Abran/Norwegian Shipowners´Association (NSA) with the support from NBCC and the rest of Team Norway in Brazil. It is the third time that a whole seminar is dedicated to Brazil and the opportunities in the Brazilian energy market, reflecting the strategic importance of the Brazilian market to Norwegian stakeholders.

In the opening session at the Brazil@Nor-Shipping seminar on June 5, Brazilian ambassador George Prata and Abran president Felipe Meira, NSA Director Amund Ringdal and Birgit Løyland, General Director of the Maritime Department in the Ministry of Trade, Industry and Fisheries set the stage for the podium.

«Brazil is one of the most promising offshore markets in the world, and Norway is a leading maritime nation. This is a perfect match and a driving force to strengthen the partnership between us. Today, Norway is a pioneer in the development of ocean strategies, and this seminar will give you some important takeaways on what is happening in Brazil», Mr. Meira said.

The Brazilian ambassador focused on the ongoing reforms and pro-market measures that are being implemented, although there still are bottlenecks like low productivity and infrastructure shortcomings that need to be addressed.

«Reforms will result in new opportunities and it is in our common interest to expand our portfolio of collaboration», Ambassador Prata said. 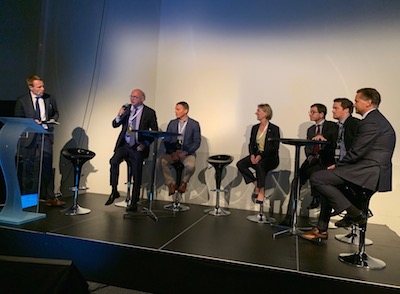 «We may have 11-12 years to turn the ship around on global warming. The international shipping industry is part of the problem, but also part of the solution. Shipping is the most energy efficient and environmental friendly transport, with less co2 emissions than other alternatives. But zero is what we are aiming at, but not there yet. Shipping is responsible for 2,6 percent of the global CO2 emissions, and according to IMO, vessels should reduce GHG emissions by 40 percent per unit by 2030.

Research Manager Anders Valland explained how Sintef is working to find the best maritime fuels of the future. Many alternatives are not even available for yet, and the uncertainties are enormous. Hans Aasnæs from Umoe Bioenergy held a presentation on Brazilian biofuel, a cost-efficient and greener fuel alternative which is already available.

«The next generation shuttle tankers are the most environmental friendly ever built, with a 50 percent reduction in emissions compared to new builds in 2010.»

The urgent need for regulatory reforms that will create a market for natural gas in Brazil, was one of the main takeaways in the presentation of Cristina Pinho, Deputy Secretary of Oil and Gas in the state of Rio de Janeiro.

«Several actions have been taken to open the gas market in Brazil and Rio de Janeiro will play an important role in this process. Rio is the energy capital of Brazil», Ms. Pinho said.

The state of Rio is actually the 13th largest oil producer in the world, and in her presentation, Cristina Pinho presented the different logistical installations in operation and under construction. A natural gas processing plant will be constructed in Comperj, and the state also studies building a refinery and a thermal processing plant.

«This depends on investors, but the upcoming bid rounds are expected to represent investments in the order of USD 250 billion in the state of Rio until 2030, and we are faced with a huge window of opportunity when it comes to the gas market. we expect a 70 percent increase in the production of natural gas the next 10 years», Ms. Pinho said.

«We have to find a way to monetize the pre-salt gas and improve regulatory framework to increase market competitiveness. The industrial investment opportunities are huge», she said.

According to Celso Silva, CEO of Golar Power, the current supply of gas in Brazil is higher then the demand. He suggests replacing diesel with natural gas from pre-salt, and developing an LNG distribution business through existing and new terminals.

«In the future there will be no need to import natural gas, but we need to build infrastructure. Today there is a lack of gas processing capacity and pipelines. Environmental permitting processes, the lack of alignment between federal versus state level framework do however represent challenges, and we need to develop new markets for the use of natural gas», Mr. Silva said. 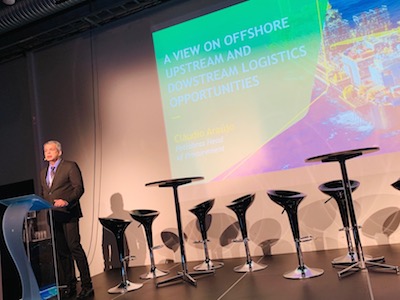 The development of the gas value chain is also concern to Equinor and Petrobras, the Equinor field BMC-33 is still depending on gas infrastructure, and in the podium offshore session, both Petrobras and Equinor presented their portfolios and ambitious plans.

Claudio Araújo, Executive Manager of goods and service supply of Petrobras presented the latest Petrobras business plan to the seminar and the company´s demand for production units and specialized vessels the years to come. The last 11 months, seven new platforms have been installed. In 2019, Petrobras have 10 bids to charter over 50 vessels.

«Norwegian companies play and have played a fundamental role in the development of the local offshore industry», he said.

Equinor has projects in all phases of the value chain in Brazil and is in a strong position to capture long term value in the country. Peregrino is the flagship of the Equinor portfolio.

«Equinor wants to produce 300.000-500.000 barrels of oil and aim to get there through operational excellence and increased recovery», says Mauro Andrade, Vice-President Supply of Equinor. 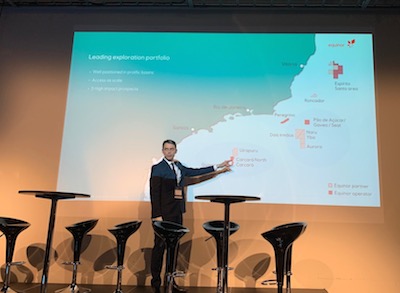 He describes the Carcará field as a world class asset, and first oil is expected by 2023-2024. For Roncador, Equinor and Petrobras plan to increase recovery by 10 percentage points. The BM-C.33 is a light oil/gas condensate field still depending on regulatory changes that will create a more competitive gas market in Brazil.

In a panel debate, Mauro Andrade and Claudio Araújo exchanged ideas with suppliers. Maria Peralta, Country Manager of Aker Solutions in Brazil, asked for early engagement and more visibility of what is coming, so that suppliers like Aker Solutions will be able to embrace project more effectively. According to Claudio Araújo, Petrobras is currently working on improving communication with suppliers and early engagement is a concern. Both Petrobras and Equinor expect higher competition in attracting the best suppliers in the future.

Lars Peder Solstad, CEO of Solstad Offshore commented that red tape still is a big problem in Brazil. Kristian Siem, CEO of Siem Industries, called the strict local content rules a mistake. «We have all made mistakes, but hopefully we learn from them. National content was clearly a mistake, and now you are repairing it», he said

Marianne Møgster, Senior Vice-President of Finance in DOF Subsea welcomes early engagement, but said predictability is fundamental, and said that the maintenance of preference given to Brazilian flag ships is important to DOF, who has built many vessels in Brazil.

STRONG PARTNERS
In the podium´s energy session, moderated by Lars Lysdahl from Rystad Energy, ANP Senior Advisor André Regra gave a presentation called «Opportunities in the Brazilian offshore sector». 13 percent of Brazil´s GDP comes from the oil and gas industry and Brazil has 15 billion boe in proven oil reserves. 93 percent of this are offshore reserves.

He also presented recent upstream legal and regulatory improvements, making Brazil more investment friendly. The most important changes are new rules on local content, a predictable bidding schedule and the fact that Petrobras is no longer required to be the mandatory operator on pre-salt blocks, opening the doors for international IOCs.

«Companies and the oil industry are excited and we see results, like a significant increase in signing bonuses in the bidding rounds. But a more diverse market requires a more robust agency. We have opportunities and assets of all sizes, that fit everyone, small and big, and we at ANP work to attract the right players. A more diverse market will require a more robust agency, and we have a strong partnership with Norway. We would like to learn from the Norwegian model, also when it comes to gas infrastructure», Mr. Regra said.