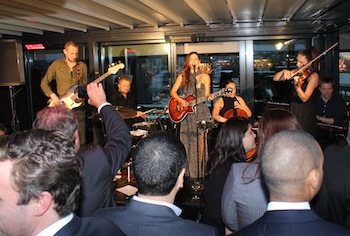 The Brazilian party during Nor-Shipping was among the social highlights of the maritime week, and several VIPs found their way to the exclusive party at The Thief at Tjuvholmen.

This is the second time that a Brazilian party was organized during Nor-Shipping and like in 2015, the social gathering was among the most attractive during the maritime event, that took  place in Oslo from May 30-June 2, 2017. The party took place on May 31, at the rooftop of the exclusive Oslo hotel The Thief at Tjuvholmen, and was organized by Abran and Norwegian Shipowners´ Association, with the support of NBCC, BNCC, Innovation Norway and The Norwegian Consulate General. All entities were also involved in the Brazil@Nor-Shipping program in 2017.

Maintaining the event an exclusive get-together has become a priority to the organizers Abran and NSA.

«We want people to connect, as if they were having a party at home, and this would not be possible if the event gets too big. This party is a celebration of the Norwegian connection with Brazil. If there is something Brazil is good at, it is to be happy, even in difficult times. We try to see the positive side of life and I want people to be happy here tonight. I don´t think any business deals will be closed, but this is a way of introducing people to each other, and then they can take care of business the next day. In difficult times you have to be more creative and see the opportunities, and we believe we have to stand together instead of competing, in order to overcome the challenges we are facing», former NBCC president Camila Mendes Vianna Cardoso, said.

Hot music and cool drinks
As expected, the party had tropical drinks, seafood and Brazilian rhythms. Brazilian singer Liah Soares was the main attraction of the night, but musicians from Oslo Strings accompanied her on several songs. Mariann Rosa was the DJ of the party. Many VIPs, profiled Norwegian shipowners and top executives like Lars Peder Solstad, Kristian Siem and Helge Møgster, Deputy Minister Dilek Ayhan and several of her colleagues from the Ministries of Foreign Affairs and of Trade and Fisheries, were among the guests and could enjoy the sunset and fantastic view of the Oslo fjord from the rooftop at Tjuvholmen.

«We organize this party to strengthen the collaboration between Norway and Brazil and create arenas where people can meet in more informal surroundings to develop their relations and get to know each other. We deeply appreciate to have the Brazilian delegation here with us at Nor-Shipping. From NSA you will find shipowners and other stakeholders with interests in Brazil, both offshore and deep sea present here tonight», Thomas Saxegaard, representing Abran and NSA, said.

The interest in the Brazilian market is also contributing to making the Brazilian party even more attractive, and there was actually a waiting list to get in. NSA president Hans Olav Lindal was however among the guests of honor.

«The Brazilian night in Oslo is becoming a tradition during Nor-Shipping, and Brazil is a big and important market for Norwegian shipowners. An increasing part of our members are established in Brazil and our engagement is big. In difficult times, networking and standing together it is more important than ever, something the turnout and the interest for today´s party proves», he said.

Awards
During the party, three people who have dedicated themselves to improving Norwegian-Brazilian relations, were awarded medals of friendship, tokens of appreciation, for their important efforts. «Plastic medals due to compliance issues», according to Camila Mendes Vianna Cardoso, but still a demonstration of the importance of the work they have done and are still doing.

The medals were awarded to Helle Klem, former Consul General in Rio de Janeiro, Klaus Döscher, who used to work for Solstad Shipping and to Pål Eitrheim, the former Country Manager of Statoil in Brazil.

«The way you headed Statoil through the years you were there, created a sense of respect towards the company and also towards Norway, and for that we are very proud» Consul General Sissel Hodne Steen said before awarding the medal to Mr. Eitrheim.

Nor-Shipping 2017 was the 26th edition of the event, making it the longest running of its kind in the world. It was the second time that NBCC was present, and part of a 60 people strong Brazilian delegation. Almost 35.000 visitors from 80 countries visited and participated the Nor-Shipping exhibition and seminars.

Brazilian oil company Petrobras sent three of its executives to Nor-Shipping this year, and Juliano Dantas, General Manager for Procurement Strategy and Supplier Base management, participated on two of the panels during the BrazilPodium before going to the Brazilian party later that night.

«Networking, meeting people and exchanging ideas is always important, and our visit to Oslo has been a very interesting experience», he said.

A party people
Deputy Minister of the Ministry of Trade and Fisheries, Dilek Ayhan, accompanied the Brazil@Nor-Shipping agenda closely the whole week and represented the Norwegian government at the party on May 31, 2017. In her speech to the party, she highlighted how the relations have grown tighter the last decades, and today Norway and Brazil do business in offshore and maritime sector, but also within aluminum, fertilizers, biofuels, banking and hydropower, along with the strong bacalhau trade.

«I always say that no one can party like the Brazilians, and it seems to me that Norwegians who go to Brazil to do business, do not want to come back. There are many reasons for that. You are so passionate, and you make Nor-Shipping more fun. I cherish our friendship and I am here to build on that. I hope the Brazilian delegation will only increase in the years to come.», Dilek Ayhan said.